My name is Hanna Dunakin and I go to Science Leadership Academy in Philadelphia, Pennsylvania. I am in Ms. Dunn’s English 1 class. Ms. Dunn recently introduced a new project called “You and the World” (YATW). We are supposed to pick an issue in the world that interests us and we believe is important. During the project we also have to find a way to help the issue we chose, and make people aware of it. You can volunteer, donate, create an organization, make a blog, or anything you think could help.

World hunger and Poverty have always been a interest of mine. My mother has always tried to help the people in need by buying them clothes, food, and during Christmas, toys for kids in need.  Although both hunger and poverty are important issues, hunger is part of poverty. I want my project to be about a specific issue, instead of a general issue.

Nearly 870 million people suffer from undernourishment in the world, that’s one in eight! 852 million of those people live in developing countries, which is 15 percent of the population in those countries. 100 million children under the age of five suffers from hunger and underweight. Each year it has been estimated that nearly 10.9 million children die, at least five million of those 10.9 million die because of malnutrition. This is our future generation dieing. Who knows, our next president could of been part of that group. What if person/s who could of found a cure for cancer, or a solution to immensely decrease the rate of world hunger, died in that group? We could do so much more than what we are doing now. Sometimes I even wonder, do people really know how serious and dangerous this issue is?

Hunger is usually described as starving or lack of food for a couple hours and you need a snack. Hunger is not that simple. The definition of chronic hunger, from http://www.worldhunger.org/, is:

This is a very important issue because it’s not getting the attention it deserves. There are walks, runs, and fundraisers for issues like, childhood cancer (or cancer in general), AIDS, diabetes, etc. but there aren’t any for World Hunger. Although there are organizations that conduct fundraisers to collect canned food and toys for the people in need, it’s not enough. In reality hunger kills more people than AIDS, Malaria, and tuberculosis combined! I’m not saying I don’t care about the people who suffer from these illnesses, because I do. What I’m trying to say is, if hunger is a bigger world issue than three world issues combined, maybe hunger should get at least the same amount of scrutiny.

The UN (United Nations) has started something called the Millennium Development Goals. It is a series of goals concerning world hunger. For example, obliterate extreme poverty and hunger in the world, decrease child mortality, and many other goals that the UN hopes to accomplish by 2015. Is that enough time to accomplish all the goals they have set, including the goal for poverty and hunger? The goals can be found in the United Nations website. Below there’s an infographic of the UN world hunger and poverty goal: 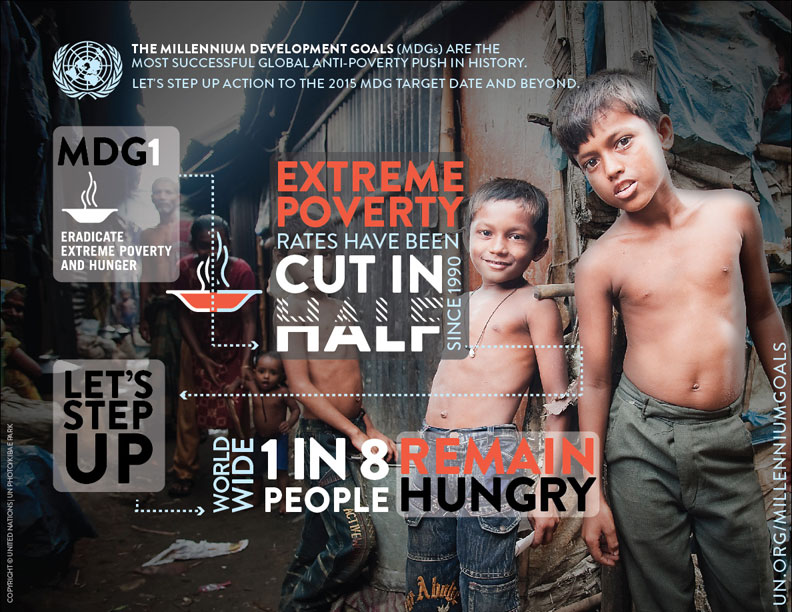 The UN is bringing awareness to this issue. They set a

goal that they hope to accomplish by 2015.

There is another organization called Heifer International where you can donate money to give a family in need a heifer, goat, or water buffalo. The reason a family gets an animal and not money is because these animals give the families something called the 12 Cornerstones. This is better than money because it gives families immediate help. They wouldn’t have to spend lots of money on their own animals because the animals given to them are donated. If they got money they would buy food and clothes because it would be the only affordable thing for them. With animals they can get nutrition and clothes for no cost. Heifer International works in 36 countries and have helped 20.7 million families so far. Imagine the number of people they have helped.

There need to be more organizations like Heifer International and the UN Millenium Goals if we truly want to bring awareness to this issue. Runs and walks should be organized to raise money for organizations like Heifer. Families need something they can hold on to, something to raise their standard of living during the long term. Money can’t do that which is why the Heifer organization is a great example of what we should be doing. Setting goals always helps people to push harder so that they can accomplish it. That’s why the UN made a goal to fight against hunger and poverty. A man named Rob Rhinehart came up with a simple idea for a solution that could decrease the amount of hunger in the world. Small steps like these turn into huge steps by the end. These are things that the entire world should be doing. 870 million people need our help. Future generations need our help. World hunger needs to be eradicated!