In the last blog post I wrote about malaria. I wrote about this deadly disease due to the  lack of knowledge about the disease in the general population.  There are  simple and inexpensive  treatments that people do not know about that could save lives and improve the world. I decided to make a survey to test people’s knowledge.

They were asked to answer these questions in short sentences:

How is malaria spread?

How is malaria treated?

Where is malaria most common?

(About) How many people die from malaria each year?

Why is there so little malaria in the United States?

What are the symptoms of Malaria?

To conduct the survey, I gave out printed sheets to my peers, and rewarded  them each a piece of chocolate for their  time .

There were some constraints in the answers, but there also was a lack of knowledge. For example 17 out of the 20 people said that mosquitoes spread malaria. From this we can guess that they know what it is: a fatal disease spread by mosquitoes. Also  15 people said that malaria was most common in Africa. Then all except three mentioned some combination of Tropical areas  and 3rd world countries. So it appears  that the same people who basically did not know what malaria was that did not know where it is.

The answer to another telling question about symptoms was hard to record. People often listed multiple symptoms and  quite a few did not make any sense. One person thought that the only symptom was swelling and that a few hundred people died from it each year.  Someone said the symptom were similar to those flu such  fever.  Others simply said they did not know. About five mentioned itching. Another interesting answer mentioned “liquid blood”, hallucinations and coughing up blood. I asked this question which involves  more specific knowledge of malaria. Most people failed to get it right. Therefore we can conclude that most people just know what it is but not all the specifics.

Now this situation causes a problem. People do not know quite enough. To get more in depth we have to look at the second question, how is malaria treated?  Out of the 20, the answers looked like this.

Looking at the graph, six out of the twenty said they did not know. Ttwo others said going to a doctor, which can I also infer that they did not know. The six people who answered question saying vaccines and the one who answered bug spray misunderstood the question. They thought it meant how do you prevent malaria. I feel like this is a big misinterpretations also. I am going to assume that the person who said,  “depends on the type of parasite”  meant medicine for all of them. The final one said blood transplants and I think they were guessing. 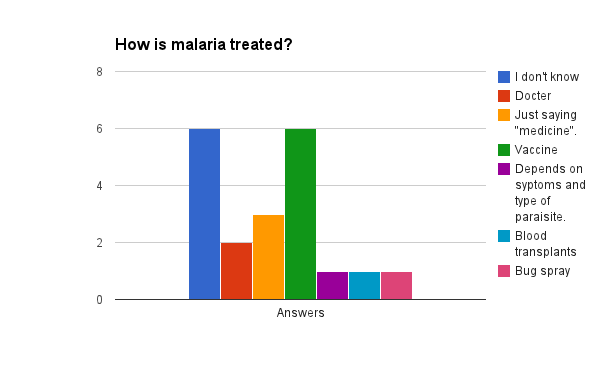 Within  all the legitimate answers,  there was a theme. (I included vaccination because it was such a popular answer and still sensical.) They are all seemingly expensive solutions. Medications are generally expensive. Vaccinations are also very expensive. People therefore conclude that malaria treatments are expensive and that it is difficult to save each person. This is at a time where antimalarial foundations need money. According to the World Health Organization , there are an increasing number of cases where Plasmodium falciparum (the most deadly species) is showing resistance to multiple drugs known as artemisinins. The organization believes that this is mostly caused by failure to receive a second medication. With more medication available, this could change the growing resistance and turn the tide. If we fail to prevent this resistance, the organization estimates it will take 5 years to recover and change the drug. While all that time, cases are increasing, and progress is pushed back.

Here is basically what I believe:  if people don’t  know about the disease,  it could get worse. With funding, we could take big steps forward to eradication. So a simple solution is to teach people. As an agent of change,  I am going to teach a class about malaria and how it affects the world.