Posted by Diana Laufenberg in Globalization - Laufenberg on Monday, April 11, 2011 at 2:33 pm
For the average 12 yo (boy or girl, you pick) in your country that you focused on last week... what is the average day like.

Make a visualization of the day.. you can timeline it with pix, do something more creative.

But by the end of class on Tuesday you should have a representation of that day... with regard to education and health at a minimum... feel free to include more factors and indicators. Provide at least 5 CITED sources to your creation.

When you are done, link to it on SLA.org blogger - SLATE. Double check that your link works. In addition to the link, reflect on... how does this life compare that that of yours when you were 12? What was most surprising about your findings? What parts were expected? What do you think that 12yo's life will be like when they are 40? Describe it... what will have changed, what will have stayed the same?
Posted by Alexis Beren in Globalization - Laufenberg on Monday, June 6, 2011 at 11:08 am
​https://docs.google.com/document/pub?id=1cO5gCdJk-ocE_sSPBOGmu9C5O-yHGjct7Sa1AgUfzQA

This benchmark was actually really fun to work on. I got to go around the city and take pictures of different things, some of which I don't know much about, and others that have a lot if meaning to me. I got to connect these things back to Philadelphia. The only issue i had with this benchmark was my camera getting stolen, and losing all my pictures. Other than that i feel that this was a great experience.
Posted by Michael Kelly in Globalization - Laufenberg on Friday, June 3, 2011 at 12:48 pm
​My keynote presentation can be downloaded here: https://docs.google.com/viewer?a=v&pid=explorer&chrome=true&srcid=0B-Wg_qvvaetUNmM0YjgzOTUtYzFhMS00ZWUxLWI5NzAtOGM4MzEzM2M4OTY3&hl=en_US

The most challenging part of the benchmark was relating some the Philadelphia-related photos to globalization. Some of the photos and scenarios in Philadelphia related to certain topics easily, but when you had to relate the photo and the topic to the entire world, that is where is got a little challenging. Sure enough, I successfully and accurately related the photos and topics to the world, but it took a lot of thought and research beforehand.

Luckily, I had several of photos I had all ready captured that were taken in Philadelphia, that related to the globalization topics. I only had to go out and actually capture a few other photos, but for the most part, I all ready captured photos before the project was assigned. I don't know if that was cheating or not, but the pictures that I have all ready taken, were very good photos, and clearly related to globalization. If I were to go out and search for new photos, I don't think the new photos would have matched up to the quality of my previously taken photos.

My favorite image is probably the photo of my cousin getting his first tattoo. The photo is very comical and entertaining, but it also relates to culture, and how body art has been a social norm in the United States, even though tattoos originated in other countries first.

The photos I captured are not that unique to Philadelphia. I am pretty sure I could capture these images in another city in the United States. Nonetheless, the photos still depict globalization.
Posted by Rumman Haq in Globalization - Laufenberg on Friday, June 3, 2011 at 5:23 am
The most challenging part of this project was organizing the photos and information because I felt like I was all over the place. I also had so much trouble focusing my camera on smaller pictures which for some reason ended up coming out better through a camera phone. My favorite part was still taking the pictures and choosing what I wanted them to be of. I wanted to be unique but I felt like I was running out of ideas. Every time I saw something that reminded me of globalization, I quickly snapped a picture of it. If I was to do it again, I would go way more in depth with my information that backs up each of the pictures.
Posted by James Seward in Globalization - Laufenberg on Thursday, June 2, 2011 at 11:06 pm
here it is

Posted by Catherine Young in Globalization - Laufenberg on Thursday, June 2, 2011 at 5:56 pm
Here is my project.

What i found most challenging about this project was figuring out an idea for a picture. the first thing I did in order to get ideas for taking pictures was asking questions and looking at every detail of everything that I walked by. I also googled ideas as well. My favorite image would be the event that took place for the "Education" section because it was my capstone and it incorporated well within this project. The use of globalization in Philadelphia is very prevalent. I think it is more evident in the U.S because we started off as a country of different people from everywhere. We are a melting pot.
Posted by Andrew Smith in Globalization - Laufenberg on Thursday, June 2, 2011 at 1:59 pm
My Project

My reflection:
This project was a challenging project, It sounded easy at first, but then when I went out to take pictures I had trouble trying to find good ones that represent Globalization. I struggled to take pictures, and put it off for a while, working on the pictures I already had. The part of this project I did enjoy was the little bits of research here and there that I had to do. for example I never knew that solar panels were made by a french men. I was surprised as to how hard it was to find evidence of globalization, its everywhere, but at the same time it is hiding. I took a picture of the solar trash compactor on a hunch, before I even did the research. I'm curious as to what else is a hidden sign of globalization, and what other cities have a lot of globalization evidence. I'm guessing New York has the most, but I'm not sure.
Posted by Arthurline Bowen in Globalization - Laufenberg on Thursday, June 2, 2011 at 11:31 am
Here is my benchmark
The most challenging part of this benchmark for me was collecting all the pictures for each topic. I found this project difficult because categorizing each topic with globalization seem like each could be represented differently. And all the pictures had to be taken in Philadelphia to show how globalization has happen over time or is still happening. As I travel around Philadelphia taking pictures I started to see that globalization was easily seen in some communities that others. In the end I really enjoy this project because I’m able to walk around the city and see it in another light then I have before. 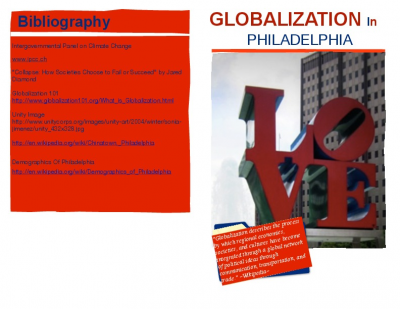 Posted by Megan Doe in Globalization - Laufenberg on Thursday, June 2, 2011 at 9:40 am
Click here to view my project.

For the most part, this was an interesting and exciting project. I loved the fact that we had to actually venture out into the city and find evidence of globalization.

I found that collecting the pictures was the most fun but it was also the most challenging. After a day of collecting photos, I realized some of them did not suit the topics. For instance, for energy I took a picture of PECO but really PECO is not evidence of globalization here. A better example was BP, a British gas and oil company functioning here.

Moreover, it was a pretty easy process collecting the photos. I first chose the 10 topics I wanted to focus on then brainstormed ideas and tried to connect them to globalization before I went out and got them.

My favorite photo was probably the Asian Bank one. I was just so fascinated by the idea that China created a branch to serve to a culture that chose to live here.

Although globalization is very evident in the city of Philadelphia, I think it is even more prevalent in bigger cities such as Chicago. Just from personal experience, I know that when I went to Chicago I was shocked by its size and even more diversity. And I believe that there are more opportunities for globalization when areas are more dense, more diverse and just bigger in general.
Posted by Anthony Seeley in Globalization - Laufenberg on Thursday, June 2, 2011 at 8:28 am
Link to my project​

I found this project to be very easy. All my pictures just appeared to me. I didnt have to look for them or nothing. Such as my favorite picture. A boat from Hong Kong named St. gabriel. I was leaving a dock when i took the picture and i talking to a bunch of guys about the boat so as i was leaving i remembered that i needed pictures for my history project so i knew i could use this picture. The picture came out really nice, and this was the first one i took so i felt really attached to this one. All the other pictures i took just appeared or i already had on my other phone such as the crow eating the body picture. As for globalization in Philly, i feel that there is way more than i thought there was initially, but i still think a place like New York has more globalization in it. The simple fact that they are more popular, which brings tourists and people all over to liver there and also way more advertisement going on there.
Posted by Aimee Leong in Globalization - Laufenberg on Thursday, June 2, 2011 at 3:31 am
To finish off the year, we were assigned a project to take notice and find the influences of global factors in our day to day activities. We were to show how the world is generally connected. At first I didn't think the project would be too difficult because I assume most parts of the world just weaved together somehow of some sort. But in a sense I was wrong. I wanted to find deeper connections between things and not be so obvious but the more I thought about it the more exhausting it got. It was challenging to take/chose photos. I started off with a bunch of photos that eventually ended up being to only a few/couple photos at max. I just went a little crazy with the camera for a bit but I had to get that under control after reviewing the photos and not being able to make sense of the things I captured. It was either no connection at all (that I could think of) or I already have something like this.

I would have to say the favorite image of the entire project is a tie between the distinguish school 2009-2010 banner (education) and CASA set up in liberty place (organization). It's a tie between the two because I guess they mean the most to me. The banner picture is one of my favorites because I have pride going to Science Leadership Academy and I was extremely excited to see this hanging up in our building. The CASA is also one of my favorites because of what they do and stand for. I appreciate how they work to advocate safety for abused or neglected children. But I'll tell you, it wasn't easy finding these images or connections. I'm not sure but I would have to say it wasn't the easiest assignment for me, just me though. I think if I traveled more it would have been helpful. I feel like in the city of Philadelphia that evident of globalization would be pretty prevalent and not less evident. Philadelphia is an average city in my opinion, but very very diverse so cultures definitely pop up everywhere. I think it be even more evident in bigger cities because in small cities, I feel like some things would be uniformed or of the same thing.