Posted by William Felinski in Storytelling - Rami on Friday, March 30, 2012 at 11:59 pm
For my benchmark, I raced through a plethora of ideas. I drafted through them, but ended with my emotional state towards an image of a foreign gardner working for Central Park in New York City, New York. From it, I thought out the words for the scene. Combined with a sketch I made of my character. The writing was completed with me actively choosing to avoid punctuation of any form other than periods. Examples of where I contemplated back and forth my decision are seen right at the start. The first being, "34 Meters Above Sea Level Central Park..." where I chose to remove the comma between "Level" and "Central". Thus, breaking the format for most addresses. In cases where adding commas would allow the reader to know the pace and style by which it should be read, I still held firm to my plan. By eliminating the inner punctuation, I felt that I allowed readers to have their own voice, pace, tone, and value of the written lines for digestion. My biggest struggle is right before the last line, which by the way is to show how Sargon has gone from a fisherman in a struggling country and industry to a gardener/street cleaner for Central Park. The line reads, "A face drenched with a bread for sailors." I originally wrote the line as, "A face drenched with a sailors beard." For me the difference was the power to the line. The second version of the line, which was my first, told the reader that he was scruffy and a familiar dweller of the sea. It also states his appearance clear. I revised the sentence to avoid the inner turmoil I felt around not placing an apostrophe "s" after sailor. Even if this could have been left, I decided it worked to change it because now it reads that the beard is for sailors; leaving a mysteriousness between the reader and Sargon's life before the very moment in the piece where he enters this piece of Central Park, merely as a figure. 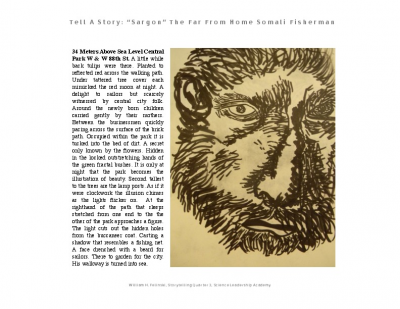