Hey, My name is Jamilah Woodards. I am currently a Freshman at Science Leadership Academy. In my ninth grade English class, we are currently working on a project titled, “You And The World” (YATW). The YATW Project allows you to choose a topic that you are highly interested  in to research and discuss. For this specific project, I chose the topic of Alzheimer’s and Dementia; The Unknown & Hidden Facts. This topic hits really close to home because my Grandmother was diagnosed with Dementia around the year of 2006. With that being said, I decided to base this project off of a disease that really affected my family and I.

Alzheimer’s disease is very well known all over the world, but Dementia is somewhat forgotten. Although many people have heard of this disease, not many people know what exactly is Alzheimers and/or Dementia. The medical definition for Alzheimers as described on  www.medicalnewstoday.com, “Alzheimer's disease is a neurological disorder in which the death of brain cells causes memory loss and cognitive decline. A neurodegenerative type of dementia, the disease starts mild and gets progressively worse.” As briefly shown in the definition for Alzheimer’s, there is a difference between the two. Dementia’s medical definition found on a medical definition website stated as following, “Dementia is a loss of mental ability severe enough to interfere with normal activities of daily living, lasting more than six months, not present since birth, and not associated with a loss or alteration of consciousness.”

Dealing with either of the two diseases can be very expensive. Yes, most insurances pay for portions of the costs and treatments, but the other portion is most likely put on the patient/their provider. A portion may not seem like it would be very costly because it is only a “portion”. Yet when Medicaid/Medicare is in the billions of dollars, that out-of-pocket portion can also be in the billions. 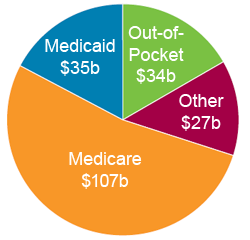 As seen in the chart above, about $142 billion would be the cost between Medicare and Medicaid. Although the cost that Medicaid provides on its own is just 1 billion dollars above the cost of personal money.

One stereotype about dealing with people who have these diseases is that they are completely unable to complete any tasks on their own. False. People believe that patients with Dementia cannot remember anything. That is also false. Since Dementia is basically a milder form of Alzheimer’s, it allows consumers to do some things that they can't. Although people with Alzheimer’s have more of a struggle than Dementia, it is still possible to do things on your own. They’re plenty of people out there who live a healthy life on a daily basis. Know that there is a mild and severe form of just about everything, so it all depends on the stage of your disease to know what exactly exceeds your abilities.   Check out the list of 5 Things You Should Know About Dementia to a further understanding.

Overall, Alzheimer’s and Dementia are diseases that should be even more now than they already are. They affect people and their families on a regular basis. I would like people to get to know and understand the stereotypes, costs, and know what the diseases actually are and do.

I like the fact that there is a compare and contrast between the two diseases and you have a graph to help visualize your point. You also made a connection in your personal life with your grandmother having Dementia.

I like how you introduced your topic, you talked about how your grandma has Dementia, which makes the reader more interested in reading your blog post. I also like how did a "compare and contrast" between the two diseases explaining how they are alike and different.