Posted by Dylan Long in English 1 - Dunn on Thursday, May 17, 2012 at 9:54 pm
​Throughout my first blog post, I addressed the issue of gay marriage. This blog will go further in depth on the new research conducted.

Many different factors play roles in the debate over gay marriage, such as religion, beliefs, the Government, pride.

Some religions view homosexuality as a sin. Some go so far as to protest the funerals of gays with signs that read, “God Hates Fags”.

President Obama soon also came out in favor, stating that his view on gay marriage has been evolving.

Reports say that Biden apologized to Obama for the timing of his statements.

Now that I have talked about political and religious standpoints, let’s talk social standpoints.

A total of 60 legitimate responses were given over a two day span. Here are the results: 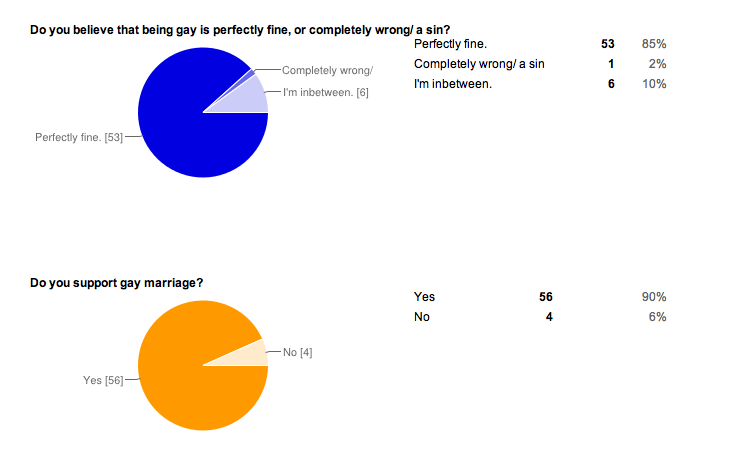 As shown above, the mass majority of those who participated in the survey are those who are in favor of gay marriage and homosexuality in general.


A survey on homosexuality from an online quiz website shows that the majority of those who took the survey favor gay marriage, and are teenagers. 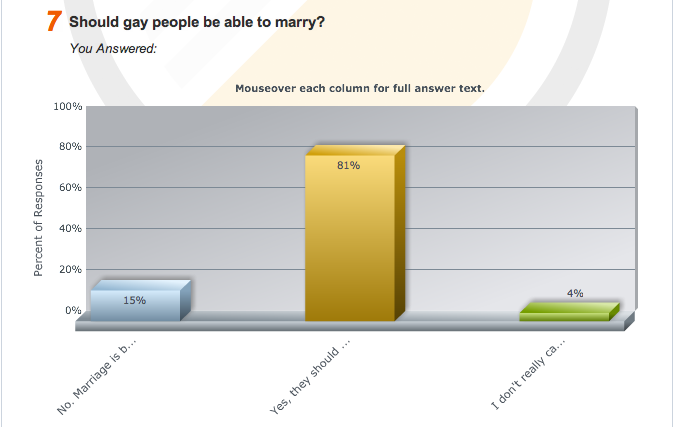 As shown in the screenshot above, over 80% of the participants in the
survey favor gay marriage. 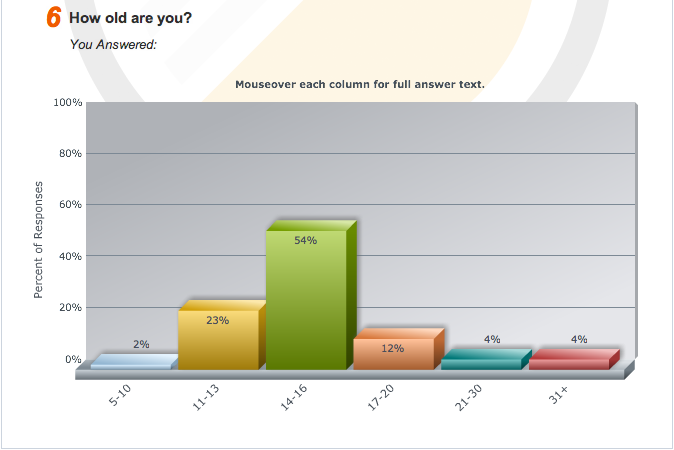 The information and data presented thus far has a great effect on someone’s opinion on the topic, and this has happened with me.

As I said in my first blog post, I fully support gay rights, gay marriage, and all forms of unions between same sex couples, because I think every human being should be able to be happy without other people's beliefs getting in the way.

Both topics have similarities:


The religious aspect of hatred among homosexuals confuses me. Sure, someone has the right to have an opinion, but why must that opinion interfere with those being judged?

Yes, those who believe in that are entitled to their beliefs, but should they have say in the beliefs and decisions of those who think and feel differently?

The answer is no. To elaborate, here’s a quote I found on the internet.

“Claiming that someone else’s marriage is against your religion is like being angry at someone for eating a donut because you’re on a diet.” - Anonymous

Thank you so much for reading. Feel free to take a look at where I got all of my information for the first blog post and this one here.

Stay tuned for my third and final blog post, this time on how we can start to make a change. Thanks!