Posted by Aissatou Bah in English 3 - Block - D on Sunday, November 29, 2015 at 10:41 am
​The skills that I focused on for this paper was trying to write something that was real. I am proud of how descriptive my scenes were and how I chose to analyse my quote.  I plan to improve my writing by giving myself time to read often.

The Foreignness of my Speech.

Never did I feel the need to silence my voice or to conduct myself knowing that I have so many great things to offer to this world. When I was in the third grade, my classmates disagreed with my ideas based on my accent. They refused to hear what I had to say because my English did not sound like theirs. They said that I sounded “African” or that I spoke funny. Those words became scars and I lost all my confidence. I didn’t want to be the person everyone turns to look at because I sounded different. I did not enjoy that sort of attention.

Back then I wasn’t able to let them know that I have the same rights as they do, being that I was also born here, the only difference is that I grew up in a household with more than three languages were being spoken. At the age of nine, I didn’t know that being multilingual and having an accent wasn’t a bad thing. Gloria Anzalda has this concept of “Wild tongues can’t be tamed, they can only be cut out.” Her idea has assisted me by making me realize that my classmates too had the intentions of cutting out my tongue. They too dislike the existence of my foreign speech. They wanted me to be just ordinary. My accent made me stand out in a way that I used to think was awfully embarrassing. I can’t really understand why this set me back. Why it has kept me sort of silent, determined that no one wants to hear my multilingual tongue. Having to pause a moment because I had mixed up the words in my brain, thinking of the same sentences in Fulani, French, Sou-sou, Mandingo and Arabic.

It seems that people are somehow afraid of change. People hate what they don’t understand. Most people like to cling on things they are already used to, so it gives them an excuse to dismiss new things. When my classmates were exposed to the way I spoke, they dismissed me and my ideas because they couldn’t relate. The way they reacted to the change was to make me not want to speak. My classmates feared my wild tongue because it was something new to them.

When I was in the third grade my teacher, Ms. King asked me to read. This was my greatest fear. I had no choice, there was no way around this one. So I began, my heart pounding. “Th..The boy went to.. the park” I stammered. As it became more difficult to distinguish my letters. “Ha-ha” laughter rose from my third grade class as tears stung at my eyes. I could feel myself shaking. “How are you in the third grade and can’t even read.” One of my classmates shouted as I had a sudden urge to pee and chills ran down my spine. “Ms. King may I please use the bathroom.” I asked. “You asked to used the bathroom too many times, what is wrong with your bladder Aissatou? You know what just walk to the principal's office afterwards. You get on my nerves. I barely understand anything you say.” I rushed out of my seat tripping as a girl with two ponytails sticks out her foot for me to fall. I ran to the bathroom, my eyes blurry full of tears. I hated school. I wiped my face and walk to the office ready to get a phone call home.

In order to meet the requirements of my classmates, I would go home everyday and read. I read about things that made me happy. I grew to love books because that was the only part of the day I could looked forward to. It helped improve my English. Reading taught me words my classmates could not even comprehend. The more I read the more I wanted to wash out my own tongue. However, I realized that attempting to perfect my English, in order to get rid of my wild tongue of its foreignness or to please others is useless. Drowning out my native background wasn’t worth it, limiting myself to only speaking English was holding me back a lot more than trying to juggle with them all.

Getting rid of my ability to speak many languages was pointless. I took to heart this feeling when I met a girl in the eighth grade, who spoke Fulani just like me, however she couldn’t speak much English. I became sort of a translator for her. I walked up to her after class when I found out that her name was Amirah. “My name is Aissatou and I’ve noticed you don’t talk at all in class.” I stated. “I no speak much English.” Amirah answer looking down, ashamed. We began to walk. “Then what do you speak?” I challenged. “I speak Fulani.” She reply. I beamed as we entered into the lunchroom. “Me too.” I said excitedly in Fulani. This was one of the times I felt proud about being multilingual. Someone was in need of my talent when I was trying to hide it. I learned that accepting my capability instead of disregarding it was not only helpful to myself but many others. The idea of trying to fit was not worth it, while it made me lose so much of my identity. 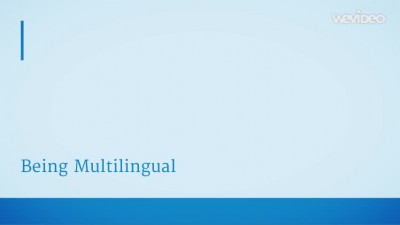