​Intro: This paper is about how the different ways we perceive social classes and the bias that comes with this. It speaks of the stereotypes lower incomes families face. In the debate on whether poverty leads crimes. I analyzed the different factors that could be contributed to. Society has many opinions and through this paper, I was able to understand both sides.

Rates of violent crime in the United States have declined significantly over the past two decades, but disparities persist. Violence is still a recurring issue we face in our society. Many of the crimes that occur tend to happen in an area that is socio-economically disadvantaged. It could be said that violence is associated with poverty. The rate of poverty has been linked to the rate of violence in many ways. There is a correlation between violent crimes and poverty because of the unemployment rates in major cities, the culture of poor areas, and the list continues. There are many examples of poverty that can contribute to this violence yet there is still a debate as to which factor are the most significant. There will always be a crime, but urban crime tends to always be located in high poverty areas.

Violence can be described as behavior involving physical force intended to hurt, damage, or kill someone or something. Since we have cleared the meaning of violence we can see how this can be easily related to poverty. If people are violent, it’s usually because they are poor, because when you are poor, your opportunities to escape poverty are limited.  When you are faced with the lack of funds to pay rent, buy groceries for your family, or you yourself. You're faced with a decision. Due to the circumstances, you want to find a way to provide. This usually means turning to crime, and more often than not this usually means selling drugs. The chart below shows the types of crimes based on annual income. 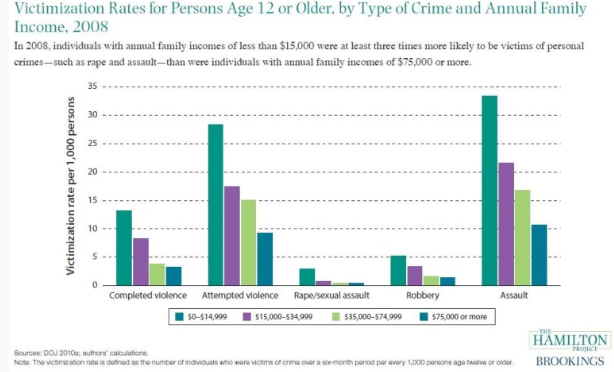 In each category, the people that fall into the category of 15,000 or less were more likely to be victims. They took the lead dramatically in each category. This example proves the point that they are more likely to experience this thing because they more exposed to this rather those who make 75,000 or more annually.  Persons in poor households at or below the Federal Poverty Level (FPL) (39.8 per 1,000) had more than double the rate of violent victimization as persons in high-income households (16.9 per 1,000). This not because they choose this but this. this is the life they were born into. It could be said that people use this as an outlet. individuals living in poverty see the benefits of committing a crime to meet their basic needs is worth the risk of getting caught

There is a counter agreement. People with higher income also experience violence. Just at a different level. They experience less of crime because there was more focus placed on this social class. In an article about the crime rate in America it states “when someone receives more education, they are less likely to commit a crime” this brings us back to the cycle that has been created. They placed people in these social class and provide them with little resources and still expect them to rise above it. Leading them to decide how to make ends meet, therefore, turning to crime. In higher income housing this is more of an emphasis on education rather than a lower income neighbor and that plays a huge factor. A neighborhood starts to get a reputation all because they were neglected from the beginning.

In Donald Trump’s run for president, he makes many speeches giving his opinion. In one speech he talks about future plans when he becomes president. In this speech, he talks about tactics he has planned for the next four years. He specifically talks about addressing violent crime and poverty. he states that his administration would be more than willing to pour resources into battling both crime and poverty. He then continues to say “But to break the cycle of poverty, we must also break the cycle of violence.” (Donald J. Trump’s, 2017) when he says this it is almost as if he is blaming them when he creates this relation between the two things he says that there is one because of another. Which is true but it seems as though he is not willing to help us he address both our hand and hand which I don't think would be perfect. If in fact, the two go hand and why would you not want to help the poverty rate in America so that the crime rate in America would go down as well. If you know that they consider why not take the initiative to fix this. Instead if just stating the problem that is at hand, do something about it.

To end, when we have this poverty vs. violence debate there is always room for other opinions. There will always be bias against lower-income neighborhoods due to their relationship and thus the reason why the cycle continues. Individuals living in poverty see the benefits of committing a crime to meet their basic needs is worth the risk of getting caught. Violence can occur in both high and low-income housing it is just more publicized in the lower. They do not go hand and hand but instead one leads to another. Faced with signs of poverty this leading you to commit violent crimes. This does not mean that the person is violent.