My goal for this essay is to show how much violence is in our country and how much we see it on a daily basis. I just want people to be aware of this. I'm proud of the work I put in it and shout out to Christina and Tobi for the peer review.

Constant Violence in US

There are a lot of examples of violence being ingrained in our minds in our society. Whether it be subconsciously or consciously we cannot escape because these factors are all around and are influencing us daily. One example is the media. The media always reports shootings, robberies, and other acts of violence on a daily basis and then go on to the next topic: essentially just glossing over it like its nothing new. The second factor is our own president Donald Trump. At his rallies, he has a history of condoning violence.  What both of these examples have in common is that they’re things that people look up too or look at. These are just some of the many things that we see everyday that affect us and ingrain in our brain. If you go on NBC 10 News you’ll see a violent act that was committed and then right next to it is something light-hearted or even silly. In a article on the NBC 10 news website (April 23, 2019) it stated how the body cameras on the policemen were being used incorrectly as there was a police shooting. Then there was a news report about an Easter Bunny using violence to defend a woman who was being assaulted by a man. To be fair this kind of violence (The Easter Bunny) could be justified because he was trying to protect the woman t. The problem in this situation are the bystanders. During the incident they were just watching the woman get beat up. The people on the sidelines were cheering for the Easter Bunny, they said, ” Beat his a** .” multiple times, condoning that this “Easter Bunny fight the man that was fighting the woman. Later that day we come to find out the man in the Easter Bunny suit is a fugitive from New Jersey with a violent past. Here are three pictures of the incident.

In the first picture and second picture, it’s the man in the Easter Bunny suit. In the third picture is him defending the women by beating up the man with excessive force. 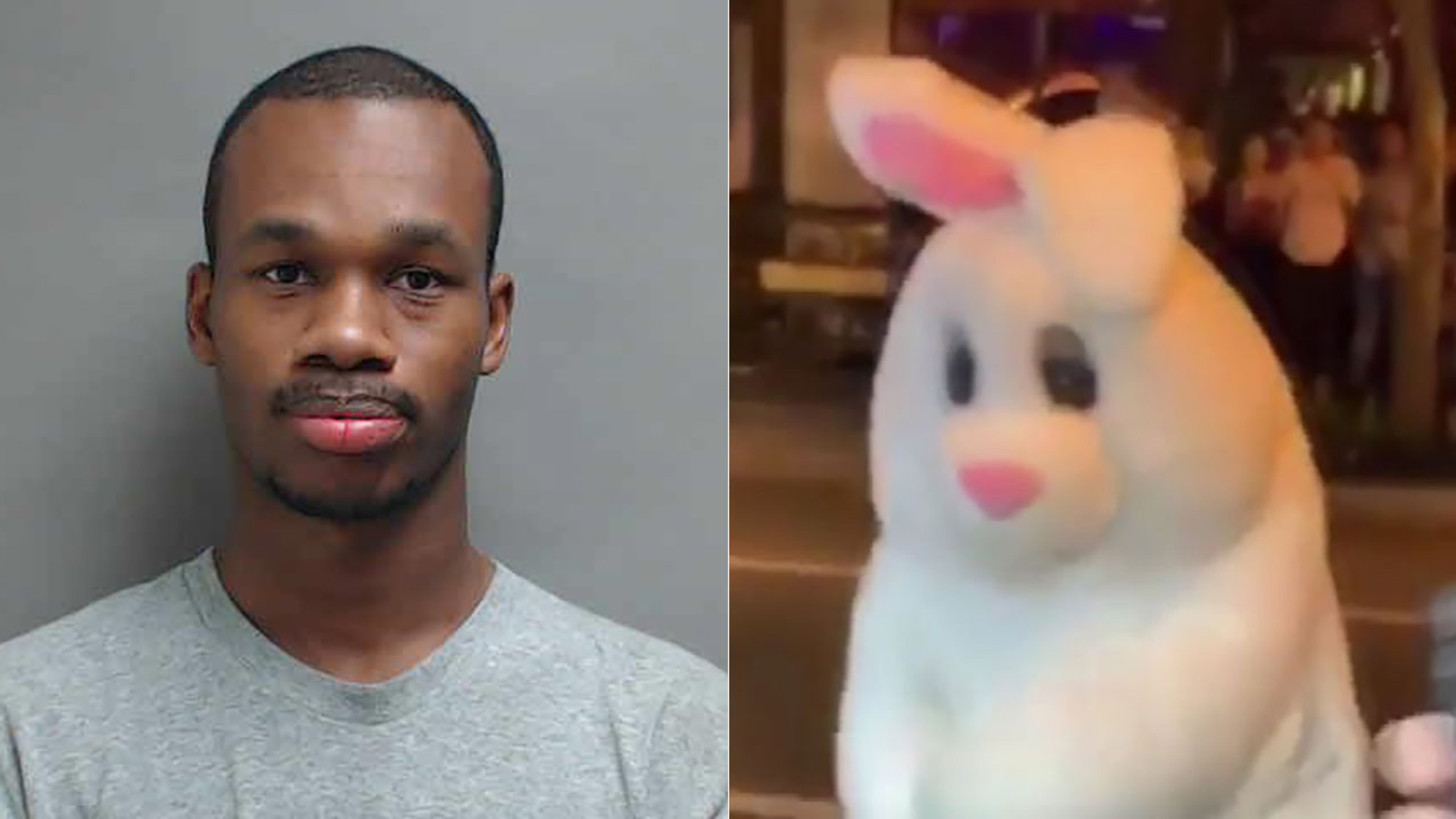 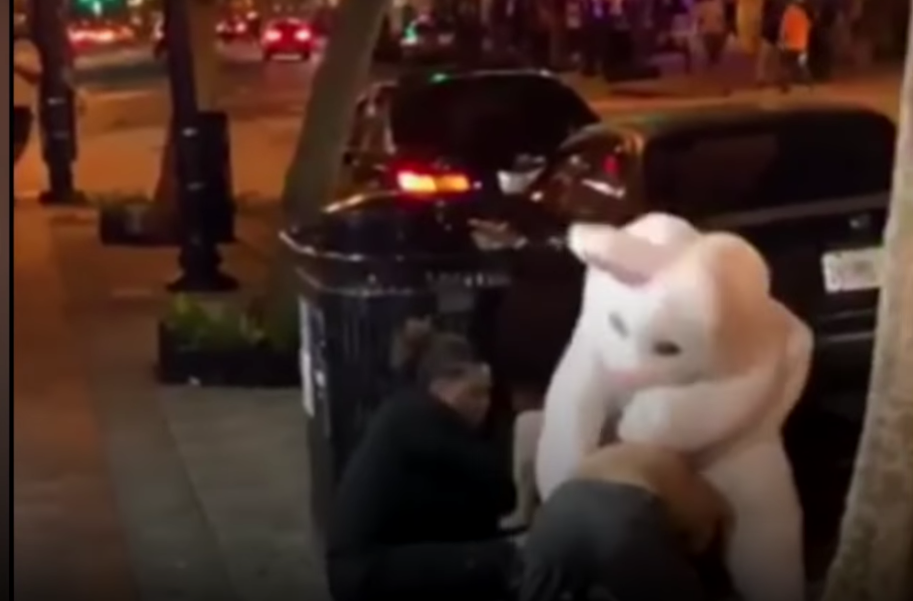 That was just one example of how violence is ingrained in our brains due to the e daily violence shown on media.

Our own president has taken a part of this in many of his rallies and has been known to instigate violence. During Donald Trump’s various rallies he claimed that he didn’t  condone violence. However, that couldn’t be any farther from the truth. 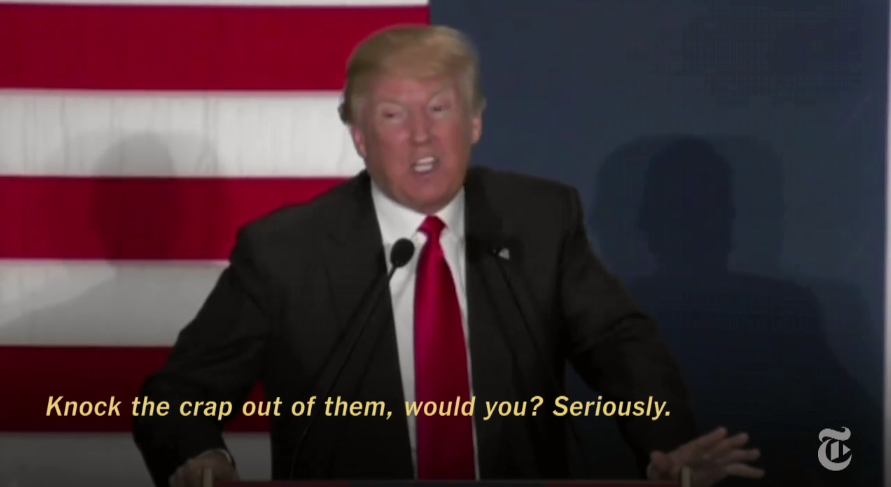 Donald Trump has been contradicting for the longest time.It’s obvious that during this time Donald Trump was trying to gain people’s votes by saying he didn’t condone violence but, it got to the point where he really doesn’t care what he says during his rallies. Donald Trump really has a history of encouraging violence in our country. The crazy part is when he said, “Knock the crap out of them” people were cheering and supporting him with this statement. This shows that if the people in power think it’s ok others will also think its ok that we have violence in our country.

One last example out of the many examples out there is The Army Experience Center. In the ACE they try to recruit kids in the army by making them play violent video games. They use these games as a means to unlock the violence that’s inside kids without them even realizing it. Here are some statistics from the ACE,” As of October 12, 2009:

And this is just for 2009. There were 80 People visiting a day being brainwashed by violent video games so they can join the army. Using video games as a means to gather kids to join the army is kind of sick. The kids don’t know better either, they think they’re just there to play some Call of Duty or something when in actuality the people who work at ACE are evaluating how useful they can be in the army.

These are just three examples of how violence is ingrained in our brains. No matter how hard we try to avoid it there will be violence all around us, it’s just how society is at this day and age. There are even people out there who support violence as seen in example two. In the end, the many examples out here can ingrain violence in our brains but that doesn’t mean everybody is hostile.