Posted by Ona Brown in English 3 - Block - E on Thursday, March 24, 2016 at 12:27 am
My intentions for Advanced Essay #4 was for my arguments and ideas to be though provoking and different. I wanted to create a mental image of my picture in my readers heads so a visual wasn't necessary. I wrote about an idea that was always hard for me to understanding. Why do we feel naturally feel guilty situations we are not responsible for and what role does guilt play in our lives. Looking back on my essay, I feel like I could've taken more time to execute my ideas better for my reader to understand. I'm proud that I used more outside sources for my essay and actual testimonies. In the end it made my paper stronger.
​ 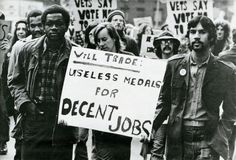 Men are gathered in the streets. They are all different shades, come from all different backgrounds but they all are hoping and fighting for the same thing. One African American male holds one side and a white male holds the other of a large white poster that reads “Will Trade: useless medals for decent jobs.” Both men gaze forward into the crowd intently, while people follow behind them.

These two men along with many men behind them are apart of the VVAW (Vietnam Veterans Against War) protesting against the Vietnam War and fighting to end war forever. Some men in the back are holding signs but the words are difficult to make out. The poster that the two men in the front are holding that reads ”Will Trade: useless medals for decent jobs.” Is used as satire. Prior to going into the Vietnam war the soldiers were promised financial stability and special provisions that would be made for them when they returned home. One soldier comments “They promised us the sky; they delivered little.” The soldiers weren’t warned about what would be faced with and the end result of their decision to join the army. Yes, some soldiers received benefits but they were very hard to obtain and secure. Many who fought in the Vietnam war felt like the war was pointless, and didn’t accomplish anything. These emotions are communicated through “useless medals”. While some might’ve thought it was an honor to fight for your country, these veterans felt taking all these innocent lives was very dishonorable.

When I first saw this image I thought about what moved those men to be out there protesting. They wanted to warn others of the reality of the Vietnam war and people would be apt to listen to them because they fought in the war. After thinking about what their motive might’ve been, I thought about how protesting didn’t undo what they experienced in the war. Were they overcome by guilt when they were silent? They couldn’t change their current circumstances, but they could change how people perceive war. If they spoke out many people wouldn’t be blinded the same way they were.

Meditating on the veterans motives allowed me to create this connection between guilt and silence. When we are silent in situations where our voices matter the most we feel a sense of responsibility when the wrong decision is made. This guilt also plays a role in our lives when we are helpless in situations.

In Martin Luther King’s speech “Beyond Vietnam” he talks about claiming our own identity and respecting other people’s identities and needs, and beliefs without degrading them in the process can help fuel the idea that war is not needed. He also mentions how he knows giving this speech on the Vietnam war could hurt his career and the people who believed him. Before he began talking about the matters in Vietnam, he touched how it has troubled his conscience. He says “I come to this great magnificent house of worship tonight because my conscience leaves me no other choice. A time comes when silence is betrayal. That time has come for us in relation to Vietnam.” This idea that silence could be betrayal is what I feel like plagues us in these situations I previously mentioned.

When the Vietnam war veterans came to visit and tell us stories from the war I was intrigued by every word. It was something about they the way they spoke. Sometimes with conviction, sometimes with pure regret that made it seem real. At the end of the discussion I asked one of the veterans Mike Felker who was a medic in the war, if he felt responsible for the lives he couldn’t save. He told me he felt as if he killed them himself, because he wanted to save each and every one of them. That wasn’t possible, but it was his goal that he didn’t achieve that left him guilty. He told me how he suffers from PTSD and he can’t help but to relive these situations. But through everything coming to schools, educating and people and speaking out against war makes it easier to cope and lifts some of the burden he carries off. I found his testimony to go hand and hand with this idea that silence encourages guilt and what role guilt plays in our life. Guilt can influence us to speak out to change other people situations.

Mike Felker writes stories about what he has experienced and I was privileged to read one of them about a water buffalo he tried to save in a small village during the war.  He didn’t know what to do but as he was told “When in doubt, fake it.” He didn’t save the buffalo neither did he alleviate it of it’s pain. He simply made the attempt and that’s what the people wanted and sometimes that’s all that is needed. What I gleaned from this story was that you can say you tried and failed or failed without trying. Failing without trying is what brings the most guilt, especially when your effort can change the state of a situation.

In conclusion, guilt will move us to do many things. Whether we are helping, speaking, or protesting. The guilt that builds up inside us from past experiences or decisions can be taken away by simply not being silent.