I can honestly say this Advanced Essay has been the most challenging one of the four we have received in this English class this year. Starting off the unit, I couldn't really get into the book we were reading because I just wasn't interested in it and when it was announced we were to do another advanced essay for our benchmark this quarter, that made me feel even worse about everything. I didn't know what I wanted my paper to be based off on at first, I was going in the direction of story-telling and the affects that had on people until I realized that was more of a personal piece. So, I finally came to conclusion of wanting to surround my paper on the media and with the help of my peers and Mr. Block, I am satisfied with what I produced. My goals were to have a clear, concise and controversial thesis which the reader could thoroughly understand which I do feel I've accomplished. I feel as though teens would be able to relate to this paper the most simply because we are living in the generation where media is booming.

Unconsciously and unknowingly, people’s behavior and aggression towards violence are influenced by the media. Majority of the youth is exposed to some sort of act of violence through the media before the age of ten years old. With the numerous and everlasting murders that have been occurring more frequently lately, school shootings, and fights going on it’s hard to ignore the violence factor that goes on in the world. Because children are still developing in their teenage years, seeing certain things such as inappropriate music, movies, television shows, etc. can affect their psychological development and views in the world.

Television can be a very powerful teacher to not only the youth, but adults as well. According to the BLS American Time Use Survey by A.C. Nielsen Co., approximately 99% of Americans own at least one television in their household. This shows just how accessible tv is and how common it is for people to be watching it. A new study in the Journal of Pediatrics says the average eight year old child spends eight hours a day on media, and teens more than 11 hours of media a day. This is more than a full day of school, which means the youth are being exposed the media and the inappropriate things it contains For example, they see things from funny memes to violent beatings and fights. With the youth being revealed to such at this young of an age, it’s already registered in their minds that this is common in society since it is praised and laughed at which can increase the likelihood of aggressive behavior at an older age without them even thinking much of it.

Kaj Björkqvist, a Professor of Developmental Psychology at Åbo Akademi University, randomly assigned one group of five- to six-year-old Finnish children to watch violent movies, another to watch nonviolent ones. Raters who did not know which type of movie the children had seen then observed them playing together in a room. Children who had just watched the violent movie were rated much higher on physical assault and other types of aggression. Other experiments have shown that exposure to media violence can increase aggressive thinking, aggressive emotions, and tolerance for aggression, all known risk factors for later aggressive and violent behavior. With the children being so young and naive, they had no clue how great of an impact the violent movie had on their actions and aggression. They were just following what they had seen in the movie and weren’t even incorporating the fact they were being violent which shows how unconscious people are with the influence violence in the media has. 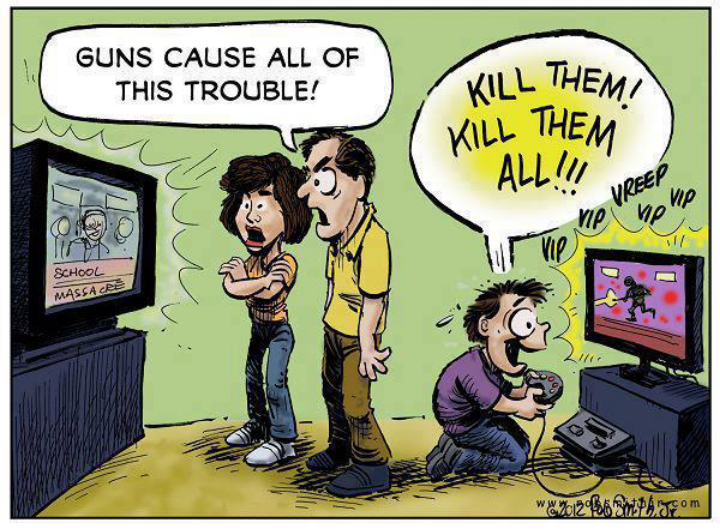 The cartoon above is a perfect representation on how oblivious society is to the issues that we constantly encounter. There are constantly issues with violence in the world and we wonder where some of the root causes stem from, yet the answer is right in front of our eyes. The future is completely dependable upon how we bring up our children, which can either be a good or bad thing it’s all in the power of our hands. Allowing violence in the media to take over our children’s mindsets can only lead to even more violence and aggression, which this cartoon shows. It’s also shown above how the child is saying “Kill them! Kill them all!” With a huge smile on his face which shows he’s condoning the people who are being killed. Both the parents and the child are unaware of how violence is impacting and influencing their lives as shown in this cartoon.

On October 1, 2015 at Umpqua Community College located in Oregon, there was a mass shooting killing nine and wounding many others. The shooter, Christopher Harper- Mercer, after killing nine innocent people was shortly killed in gunfire with responding officers. After the shooting, the police investigated Harper- Mercer’s background and found that he was obsessed with violent gaming and would focus on this more than spending time with his family. His neighbors would say he was a nice young man, but was isolated majority of the time and only took interest in conversations when discussing video games and guns. While investigating, the police even found a secret chat room online which him and anonymous others were planning out exactly what he’d do. Before he had committed this tragic crime, he said “I’ve been waiting to do this for years”. Meanwhile, his companions were supporting him and even giving him ideas on when and where to do it. Recently, researchers at Ohio State University conducted a study and concluded that, "People who have a steady diet of playing these violent video games may come to see the world as a hostile and violent place”. Without even the slightest thought, one’s perception of the world can be altered just by constantly being exposed to violent video games.

In conclusion, the media can impact our daily life decisions unconsciously. Some solutions to reducing the influence violence in the media has on us are reducing the exposure to violent movies, television shows, videos games, etc. By doing this, it won’t place anyone in a specific and unhealthy mindset. Also, by increasing media that will have a positive effect on our lives and actually teach us something helpful both short and long-term will not only educate us, but place us in the right mindset that’ll benefit everyone in the world.

Thoman, Elizabeth. "What Parents Can Do about Media Violence." Center for Media Literacy. Web. 21 Mar. 2016. <http://www.medialit.org/reading-room/what-parents-can-do-about-media-violence>.