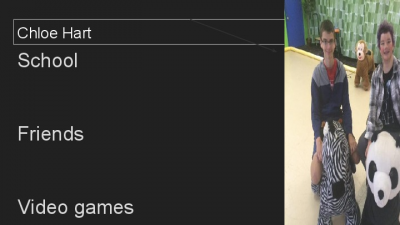 I started with a picture looking of the pictures of me. I was looking In and I had a few of my and my dog but I went with my and my best friend Theo.  After looking at it for a few minutes I realized it draws up your eye but only for a second I very bright compared to the not so bright dark background of the rest of the slide.  After that I got a bit suck.  I really did not know what to right on the side.  After a bit of thinking I started to list things about what that I would talk about during the presentation.  I listed three things in relatively big letters.  I thought that it would give a basic idea without directing your attention away from from me.  Also the image bleeds of the slide.  I did this because because I wanted to make it look like it was a bigger image without making the acall image bigger since it did not as good if it is bigger.  If the Since the picture was not too advanced. You get the idea of both though it taking your attention for two long.   I also had my name on top after a bit of thinking I was not sure if  I should have had it. Since it more text that can distract them. I decided that I could just say it.