Posted by Allison Patterson in Capstone - Dunn on Thursday, May 30, 2013 at 9:39 am
For my capstone, I created a Model United Nations conference. My project was a lot different from the average MUN club because instead of sending the students to conference with already had a topic and other competitors, I created a competition inside SLA. I chose this project because I felt like it was a good way to combine my love of international relations with my love for teaching others. The end product of my capstone was 15 students that were trained in Model UN. They learned the rules of the competition as well as how to prepare for the competition. In addition, they competed in a competition held at SLA. The competition resulted in the group coming to a finalized resolution which is huge because many time the real UN doesn't even reach a resolution during a meeting. MUN teaches students to be open with their ideas and to feel free to talk in a group. These students joined this club scared to death when I told them there would be a competition at the end of the year, they left asking me if they could participate again next year.

Cortellini, Mattia. "MUN for Dummies." Scribd. N.p., n.d. Web. 31 Jan. 2013.
The Powerpoint, MUN for Dummies was created by Mattia Cortellini to help people understand how model UN works. When I started this project in September the powerpoint wa free to access so I copied it and saved it because I know Scribd sometimes makes you pay for Powerpoints. This Powerpoint helped me to get a firm grasp on the way model UN works. I also showed the Powerpoint to the students and it helped them to have a solid source from which to understand the rules of model UN.

Mahendraraj, Yadavan. Delegate Guide. Philadelphia: Upenn ILMUNC Jan 24-27 2013, 2013. Print.
I received this brochure from the Ivy League Model United Nations Conference. It went into detail about the rules and regulations of Model UN conferences. This is being used as a learning tool and guide for all the students. For my competition I plan on creating a brochure similar to this one. I might use the rules outlined in the Ivy league brochure making modifications when need be. For the most part the rules will remain the same.

Mahendraraj, Yadavan. Faculty Advisor Guide. Philadelphia: Upenn ILMUNC Jan 24-27 2013, 2013. Print.
The Faculty Advisor Guide was given to me at the Ivy League Model United nations conference and, just as the Delegates guide, goes into detail about the rules of conference. This brochure is being used as a learning tool to advise the students on how to dress at the conference because it has a very detailed list of what the students should and shouldn’t wear to conference. I found in my research that students are more likely to perform better and act appropriately when they are “dressed for success” therefore, this will be implemented in my conference.

Beckett, Megan, Geoffrey Borman, Jeffrey Capizzano, Danette Parsley, Steven Ross, Allen Schirm, and Jessica Taylor. "Structuring Out-of-School Time to Improve Academic Achievement." Institute of Educational Sciences. N.p., July 2009. Web. 31 Jan. 2013.
Structuring Out-of-School Time to Improve Academic Achievement is a PDF document produced by the Institute of Educational Sciences. This document goes into detail about how to structure academically focus programs that are still engaging and keep the students interest. I used this guide to better understand how to keep my students engaged. On page 22 of the guide reward incentives are discussed. For my capstone I use pizza as a reward to keep the students interested because I’ve seen how rewards can lead to a better program outcome.

Ronca, Debra. "After-school Fun: Making the Most of Your Kid's Time." TLC. N.p., n.d. Web. 31 Jan. 2013.
“After-school Fun: Making the Most of Your Kid's Time” is an article written by Debra Ronca for TLC. This article explores how kids should be spending their free time out of school with emphasis on after school activities. At first this article didn’t seem of much interest to me but then I read into the article more and found a lot information of how kids learn. I learned about having a routine and setting a clean plan from the start of the program. I will use these things when conducting my classes.

Sanders, Virginia. "How to Create a Fun After School Program." Yahoo! Contributor Network. N.p., 13 Aug. 2007. Web. 31 Jan. 2013.
The article titled “How to Create a Fun AFter School Program” by Virginia Sanders explains how to create a program that doesn’t stress the student out but still is academically engaging. I found this article interesting because I never thought about how I would make model UN a low stress course. For me MUN is my capstone so it’s apart of my life so it will naturally be stressful at times, but for the students this is an extra course which they can drop at anytime. As a result I want MUN to be as little stress on the students as possible. This source helped me to see that in MUN the students need to be able to relax while still getting work done.

"Position Papers." United Nations Association of the USA. Unausa, n.d. Web. 31 Jan. 2013.
I showed this source on the first day of class because I found it to be a very helpful source for all aspects of model UN. In regards to this page in particular I used it to advise the students on how to create position papers which are essentially just how your nation feels about a particular issue. I think the students found this site helpful because their position papers seemed thoughtful and well organized.

"Resolutions." United Nations Association of the USA. Unausa, n.d. Web. 31 Jan. 2013.
This is another sources from United Nations Association of the USA but this one is on resolutions. I gave this to the students in the middle of the course after the position papers were written and the topic for conference was discussed. This source helped to explain the actual purpose of conference. In the long run I want the students to form a resolution as the United nations however, to get to that point each nation must have an idea of what resolution would benefit them the most. I used this source to advise the students on how to go about this.

Ryan. "How to Build Your Model UN Program." Best Delegate RSS. N.p., 16 Mar. 2011. Web. 31 Jan. 2013.
Best Delegate is another site like United Nations Association of the USA, which specializes in how to create and host a Model UN program. I used this source to get a better idea of how to create my conference. This site goes as far as to explain why having a smaller conference is better then a large one. The site explains that when running the first conference a smaller group can be used as a learning tool to help future conferences. It helps for the chair members to gain experience and to help figure out the logistics of the conference.

Whittle, Thomas. "Kenya, Slovakia to Seal Nuclear Deal by January 2013." NZweek RSS. Xinhua Publish, 21 Nov. 2012. Web. 31 Jan. 2013.
I used this source as an example of a good article for one of my delegations. The delegation of Kenya was having difficulty finding sources that relate Kenya and nuclear power so, I showed them this source. From this article I was able to work with the delegation to create a position paper and in long term a resolution.

"Nuclear Energy Development in Kenya Faces Many Challenges." - Opinion & Analysis. N.p., 16 Nov. 2012. Web. 31 Jan. 2013.
This is another source I gave to the delegation of Kenya. I like this source because it clearly outlined the safety protocols that a going to be in place when making the nuclear weapons. My conference is going to focus on how to make safe nuclear powers so, this source was a big help to the delegation of Kenya. 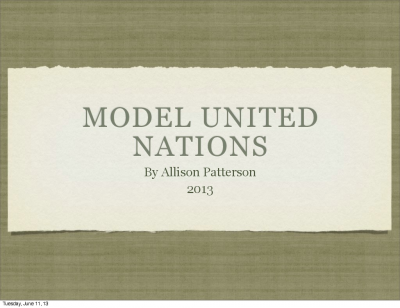