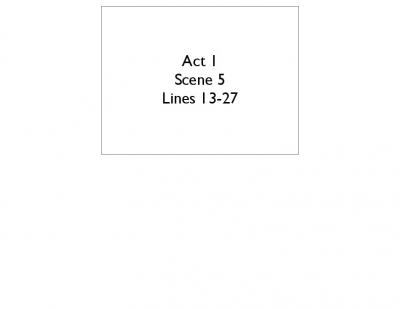 Shakespeare is widely regarded as one of the best writers in history. He is praised for his poetry as well as his numerous plays. His writing is so influential that  it is still Analyzed and Preformed today by scholars and actors. As most who have read his writing or seen his plays, he has earned this degree of respect. His writing captures the reader, dragging them further into the text with each line. Shakespeare accomplished this riddling the lines of his text with carefully chosen language. Although, the thing that draws the reader in more than anything else is his involvement of the reader’s imagination in his text. He does a beautiful job of weaving opportunities for the reader to go off on their own mental tangent.  By doing this, he can avoid wasting time with lengthy and dull description, focusing more on the plot.

One prime example of where he does this is in one of his most famous works Hamlet. In this excerpt, The spirit of Hamlet’s Father comes up from the underworld to speak with him. In the conversation, Shakespeare has the ghost mentions being in hell.

“And for the day confined to fast in fires,

Till the foul crimes done in my days of nature

Nothing in Shakespeare’s writing is just there for the sake of being there. In this example he makes sure to mention that, But does not go in depth in to why he’s there. This makes the reader come up with their own reasons. Those with minds that are eager to analyze will question if the current king (the antagonist of the play) was really any worse than his brother. The other side of this argument is that he was not condemned for his deeds as king but rather for other, smaller actions in his personal life.   Pieces of text like these are the reason shakespeare’s works are so widely celebrated. Each play is infinitely more complicated than it looks at first glance. Shakespeare uses this method in more than just his sub-plots. He also does this to aid the descriptions in his plays. As seen here “

“I could a tale unfold whose lightest word

Would harrow up thy soul, freeze thy young blood,

Make thy two eyes, like stars, start from their spheres,”

He does not make the kings ghost actually reveal what he had experienced. He instead describes how Hamlet would react to it. If he had instead included a lengthy description of the ghost’s torment, then the audience would only remember it for the beautiful language. By doing this, he makes it easier to get the ghost’s key points of the ghosts speech across, without sacrificing any of the shock and awe value of the passage. What makes shakespeare a good writer is not that he works well with what he writes, but he also makes use of what isn’t written. He is as much an artist of implication as much as he is a wordsmith. These passages where the reader has just as much influence on the play as shakespeare does are the reason his writing is so highly regarded today.