Over the past couple of days, I've been researching online for new news, dealing with animal abuse and cruelty. I came across an article on the New York Times dealing with an issue in Idaho where Governor CL Otter has signed a bill that will make it illegal to film acts animal abuse on agricultural farms. Anyone who is caught will have to pay a $5,000 fine and  serve a year in jail. Curious about the subject, I decided to dwell deeper into this story. I found a rather extensive report of this story on ABC. The reason why this bill was created was because of the actions of Mercy For Animals,  a non profit organization, who secretly filmed the physical and sexually abuse of cows at Bettencourt Dairies. The owner of Bettencourt Diaries was getting death threats and that’s why the bill was put in place (yeah, right). To read the story, click here 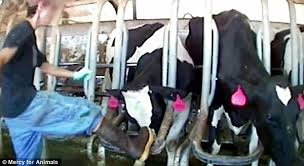 Here you can see a worker kicking a cow in the face. This is from the video filmed at  Bettencourt Dairies

While reading this, I became upset because Mercy For Animals was only trying to help. They were trying to promote the acts of wrongdoing through the media. Is that wrong? Now that this bill will be put into a law, cases of animal abuse and cruelty will forever go unnoticed and people will continuously support these so called “animal friendly” organizations and companies. Would you want this to happen?

This time around, I wanted to conduct my own original research, so I decided to interview some staff members at the Francisvale Home for Small Animals. They are a non- profit, no kill shelter located in Radnor, Pennsylvania. All of the staff there were extremely  patient and made it no problem to work with me even after such short notice. It was very exciting working with them and having my questions answered. Below is one of the questions I had asked:

And their answer was: “Lack of education, frustration, mental health problems, lack of money and also the owner may have suffered abuse when they were younger.”

That question was followed by : “How can I prevent animal cruelty?” Their answer:

You can learn about positive enforcement and when you witness your friends or relatives or anybody mistreat an animal, you can teach them the right ways to treat them. You can also have an animal abuse officer come teach a class and at 17 or 18 volunteer at a local shelter.” Click here to view the rest of the interview.

I was shocked to hear that one  reason why some people commit animal abuse is because of lack of knowledge. My main focus is to now educate others of what I learned so that way, animal abuse won’t have to be a problem. For my role of Agent of Change, I’m thinking about volunteering at a shelter to gain more knowledge so I can share that with others. Hopefully after doing so, I can host a fundraiser where Human Law officers and I teach the community on ways to prevent cruelty and abuse as well as have people donate money to go towards animal shelters that focus on animals victims of abuse and cruelty.

This blog was really good, you explain your topic animal cruelty.

I like how you told your opinion about your topic of animal cruelty. It was very smooth transition from information to your opinion.