Posted by Andrew Roberts in English 1 - Dunn on Tuesday, May 14, 2013 at 9:59 pm
Hi, I am Andrew Roberts.  if you remember,  I have posted two other blogs on this subject, which are here: blog 1 and blog 2.  I am one of the only conservative minded people in my school, and stand up for my opinions and beliefs.  One of those is abortion.  I think that the conservative, pro-life side of this issue is not presented enough, and wish to change that.
I must say quickly that being in a liberal city has influenced my opinions.  It has helped me see the whole story of every topic, and has helped me decide on each.  I want others to be able to do the same.
I have enjoyed this whole project on the whole.  I enjoy debating with others on topics such as this and also their topics.  I think that this has also helped me clearly define my beliefs about abortion, but there were most definitely bumps along the way.  At the beginning, I had was very stressed out about this project.  What would I write?  How would I be able to hold my ground?  What would I do for my Agent of Change part?  I had two or three hard nights of this, but I think that I have learned much from that and am proud of the work that came from this.  One thing I decided along the way is that what really needed to be done was to get my side shown.  I did not originally thing of this, but later I realized that that is kind of what I was doing all along:  giving my reading audience that facts that are hidden by the media.
I think that because of these posts and my research I am much better educated on this subject.  I will be much better prepared for debates I will have in the future; I actually did debate one of my classmates, and, while I did not "win", I did do much better than I thought I would.  I had a way to answer every question and a defense for (almost) every point.  If I continue my interest and passion in this issue (which I most definitely will) I think I will be able to make a bigger impact on this city, and these blogs were the start of that passion.
My agent of change part went along with that theme.  Part of this project was to go out and do something to change your issue.  Wanting to get the word out, I decided to attempt to publish an Op-Ed in several newspapers.  Starting out with my first blog as a base, I change =d it to be more of an editorial and not a blog.  I also made the quality of writing higher in hopes that I would get published.  I sent this Op-Ed (entitled The Other Side) to the Daily News, the Philadelphia Inquirer, and a student-run online newspaper called Mighty Post (you can see that site here).  I was very disappointed by the response.  The Daily News sent me an automated 'we have received your submission' email and the Inquirer sent nothing.  Someone at Mighty Post sent me a detailed email about editing my op-ed, and I was grateful for the care he showed.  However, I emailed him back two weeks ago and have not heard anything else.  I did try to get my op-ed out as much as I could, putting it on my facebook page several times among other things,  but I was hoping for more.  I will continue to try to get this published.  I was able to make my op-ed into a newspaper article format, which you can view here.  Google Docs uploaded it terribly, to better view it download it.  I will also include the pdf as a picture in this blog post.
Thank you for the time you gave to me by reading my blog, and if you want to contact me feel free to do so at aroberts@scienceleadership.org.
Bibliography 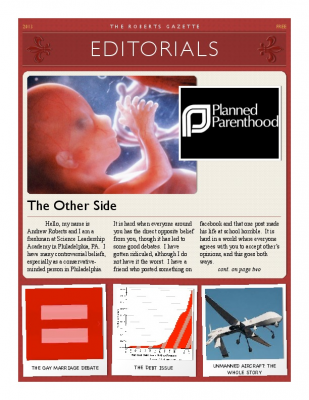