When I first opened the time capsule that apparently was buried in ‘1948’ I thought, what this might be, I turned to this first page and was immediately intrigued.  I wondered, ‘What could this ‘George Orwell’ person be talking about, then I read the first chapter and instantly thought that this man’s prediction is more prevalent this day and age (Year 2048), rather than 100 years ago. It appears as if he was curious about the Soviet Union, and their society, since that were a dictatorship. The book took place in London of 1984, the character “Winston” worked for the government, he had terrible life that was controlled by ‘Big Brother’ he was not allowed to love anyone, have close friends, or even think. The government had a thought police that would come and make you work on a camp if you appeared to be becoming curious as to why the government wanted control over its citizens, and any other thoughts that the government would find as a threat. In the novel Winston meets a woman named Julia. She likes having sex and has had many affairs with men high in the government. One day Julia slips Winston a note that says “I Love You” on it. Since Winston has already been infatuated with her, this immediately blows him away! They then begin to have an affair in the wilderness so that the government will not catch them, because this would result in death. They soon then meet with another man that Winston was interested with, O’Brien, they meet and he convinces Winston to that he is a rebel just like him and Julia. He gives him a book that O’Brien says “All rebels should read”, he takes it and reads it. Since “Big Brother” is always watching they catch Winston and take him and Julia to be tortured, they get everything that they can out of Julia. In the last few moments of torture Winston encounters, they then make him endure his worst fear which is rats. The government’s torturers threaten that they will let the rats eat through his face. Winston then tells them to do it to Julia, the government, identifying this betrayal, then let’s them go, but, prior to doing so they O’Brien explained to Winston why the government is the way it is, and why rebels like Winston and Julia are a threat, a now terrified and brain-washed Winston now believes whatever the government tells him and when released him and Julia are separated, they see each other, but Julia goes the other way, and Winston just sits in a café watching government news and smiling.

This novel is very prevalent today because it discusses other aspects of George Orwell’s prediction, it has discusses how they government destroyed all of the original documents and replaced them so that the citizens of London at that time would not know the truth. It also discusses how the movies will be filled with sex and not based off of classic literature, which is true due. Both of these points are true, I believe that our government has altered documents and made us believe that they are true, and it appears that every film that is nominated for an Academy Award has some type of sex scene, but to me, the most prevalent point made was discussed throughout the novel, and that is “Big Brother is always watching” , that is very prevalent today because now I believe that Big Brother has video cameras in our computers watching us as we type and look through our screens. Overall, I just pray that we don’t have a ‘Thought Police’ or forced into a Totalitarian Society as drastic as that the one described in the novel. 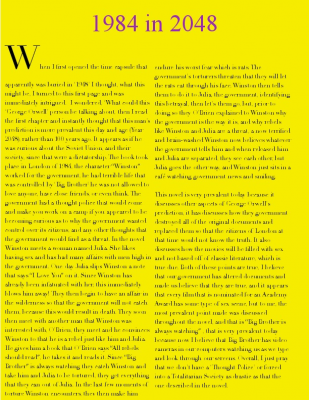