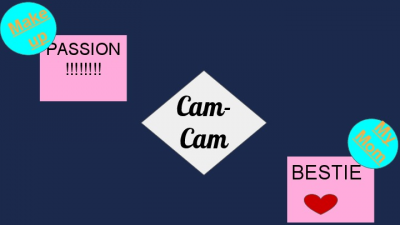 I presented my slide to a smaller group which made my critique more personal and less nerve racking rather than sharing it with the entire class. I had  Preston in my group which I was frightened by but also happy about because i knew he was a harsh critiquer who would give me good advice. After seeing half of my class present i knew that some things needed to be changed and my group agreed with me. The first thing I changed was my placement of everything on my slide.

The reasoning behind changing the placement is because it wasn’t aesthetically pleasing to the eyes. My shapes were overlapping and my pictured seemed stretched. I fixed my shapes by overlapping shapes that were supposed to and moved things around to make it proportional. I deleted my picture entirely because in order for it not to look stretched it would be too small for my liking. After deleting the picture, I made my name my focalpoint and it made everything look more aligned. When the picture was placed in the middle I had to move my name to the counter and it caused it to look awkward because it wasn’t proportional, but that wasn’t the only thing I had to change.

I also had to slightly change my color pallet. My group told me that my wording didn’t have that much of a contrast. In my opinion color/contrast is one of the most important to a slide, because that’s the first thing I pay attention to. My mind works through color so I made sure that i had good contrast which I learned learned on a color pallet website. The changes I made did make my slide more appealing and more clear to read.