Carol Burnett was the first woman ever to have a comedy variety show. “The Carol Burnett Show” was on air during the women's lib movement. Even though the message she sent, or jokes she made were not specifically about women's right, the fact that she had a show is strong enough to prove that she was an activist for women's rights. Because of Brunette female comedians that are around today like Tina Fey, Mindy Kaling, Tig Notaro, and so many others are able to do the wonderful things they do with less backlash (although unfortunately still some). Burnett Also helped Vicki Lawrence, a female comedian of her time, because she was one of the other actors on the show.

Having her own show did not come easy however. NBC Told her that she should not have the show, telling her that it was “a man's game”. But that did not stop her, she pushed on and had an amazingly successful show. In her comedy and in her life, Carol Burnett pretty much did what she wanted. That’s how she was such a funny person, and also successful. She would not give in to what other people told her, she was strong and persistent, working till she got what she wanted and what she knew was right.

Burnett was also influential because she set an example for how the world should be. Women can be just as funny as men, and she proved that. In fact, she never had to say it because her actions proved that it was true. Her show was not about women's issues, but it was around at a time when a lot of women's issues were being fought for. Carol Burnett was a living example of what so many women at that time were fighting for, and to make thing better, she was amazingly funny.

1955 - First went on TV. She appeared on The Paul Winchell and Jerry Mahoney Show

1959 - Acted in a show on Broadway. The musical was called Once Upon a Mattress.

time on the show she won her first Emmy.

1963 - Apparent in her very first movie, Who’s Been Sleeping in my Bed?

1978 - Burnett ends her The Carol Burnett Show. Throught the ears she on 5 Golden Globes and 5 Emmy Awards. 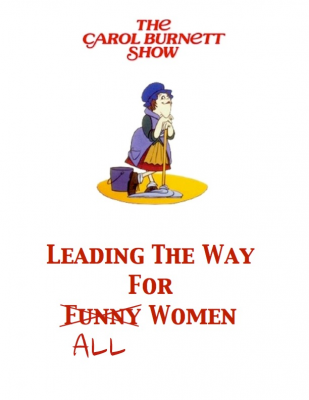