This book made the great horror writer Stephen King what he is today. The book Carrie written by Stephen King tells the tortured tale of a social outcast named Carrie White who has the ability of telekinesis. Throughout the story she is pestered by schoolmates while being abused by her unstable Christian mother. You can see throughout this try that all of the characters have realistic motives for example a character disliking the the concept of sex because she was raped. In fact one of my favorite characters in the story was Carrie’s Mother, she has the most backstory and does the most provoking in the plot, as shown through her increasing violence towards Carrie.  As you go through the story you find the different troubling backstories, they turn characters who appears purely evil to people who are suffering themselves. The build up is also amazing, as you move through the story you may hear about a character trait that may not seem important, but they lead to extremely plot centered.

Though Stephen King is known by many to be an amazing writer this book had almost not happened. King originally wrote for Men’s Magazines and barely got by with his earnings, for his family and eventually he thought of making an actual novel. He took inspiration from people from his high school and began writing about a shy girl with telekinetic powers. After many rewrite he threw this story away convince that he could not write from the female perspective while being a man. Only through the persuasion of his wife did he actually attempt to finish it. He then attempted to publish his book about a girl with telekinetic powers and was rejected 30 times, until finally he was published by Doubleday. King from then would publish about 200 books of varying genres including contemporary horror, suspense, science fiction, and fantasy.

The story itself is great, it tells a timeless tale that can still apply to things happening today. The story takes place in 1979, which is approximately five years after the date it was written. The story is told through notes, documents and even through the third person from the view of Carrie, which in King’s later books do not use with the exception of the third person view. The books varies in how scary yet intriguing it can be; you fear the character, but you want to know what happened to them to make them that way. The book’s main focus is on building character and not on gore not scare you. It does not make the horror monster into a villain, it more like a normal person is being pushed to do evil things. King also breaks the norm by keeping the book focused on what is happening and not what it looks like, but instead King kept it tame and clean and until the extreme ending. What is amazing though is that unlike many of King’s Novels Carrie got not just a theatrical release, but has had two remakes, a tv series, and even Broadway musical adaption.

Overall, this book is probably one of the most important in Stephen King’s Career, it has come so far and done so much. Carrie is a good book to introduce someone to horror and also a good start to the horror franchise. This book does not make the mistake of scaring you with surprising visual, but instead leading you in and making you feel uncomfortable as you move along. King’s works have helped him contribute to what horror is today, changing what the villain of the story can be. He has kept fans of his stories very happy, and even to this day he is still producing his books and changing genres. 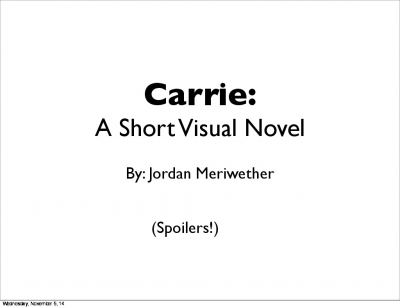