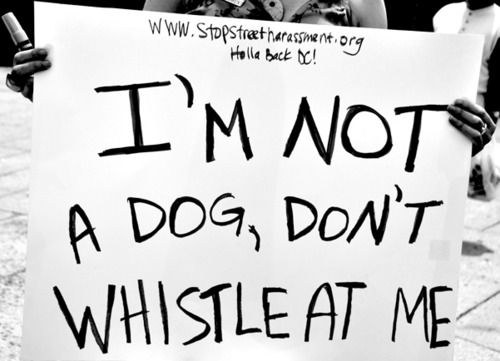 This is a sign about things men do to get women's attention when catcalling and how they feel about it.

Growing up is not as easy as it may seem, especially if you are a young woman. We are in a society where men feel the need to make snarky comments about our bodies without thinking twice about it.  As women some of us develop at different ages. Some girls can be 12 with a well developed body that makes them perceive as a woman at least 18 years old. So men believe it is okay to make sexual comments towards them without thinking that they may be under the age of consent. While learning new things I want to have a clear understanding on the view of women being harassed in some way of catcalling. I know that there will be many stories that will be very harmless to the person but also stories that will seem extreme for a guy trying to get a woman's attention especially if you do not know what their intentions of where they are coming from. My goal of this project is to bring awareness to people around our community even the that catcalling is a product of harassment. Many people feel as though it is such a thing that makes people feel uncomfortable and threatened while walking down the street but, it's time we try and do something to stop men from doing outrageous things when it comes to trying and talking to a female.

I am very interested in this topic because catcalling is something you witness everyday. Someone is either staring you down or even making remarks that make you feel unsafe. For example Ashley Ross would take precautions “I’ve even gone to such lengths as wearing a sweater over my workout clothes every single time I step out the door, even midsummer, as my curves in Spandex seem to give men—of any age, race or neighborhood—the welcome invitation to comment on my body.” She would do this because she felt unsafe in her surroundings while she felt confident in her body but other people felt as though it was their opportunity to gawk over her body. I feel as though this is something to make aware to people because this affects the way women view themselves. This topic matters to me because I have experienced instances where I myself have been targeted by men between the ages of 15-25 stare me down or even scream out trying to get my attention. Which makes me feel threatened and even unsafe in my surroundings. I feel as though readers should know about this because it gives them information about what is occurring around the world if this personally hasn’t affected them because everyone may view catcalling different. Doree Lewark is someone who feels as though she is a fan of catcalling saying “When I know I’m looking good, I brazenly walk past a construction site, anticipating that whistle and “Hey, mama!” catcall. Works every time — my ego and I can’t fit through the door!” Now this makes you think about how many women feel this way. Do they really look for the attention or are they genuinely afraid when walking down the street in some spandex after going to the gym?

This is a significant issue in the world because it makes themselves feel as though that this is their fault because of their choice of clothing or even makeup they decide to wear that perceives them to be older than usual and maybe more appealing to older mean. This outrage of catcalling has gone out the roof, “a staggering 98% of women surveyed in 2008”, reported that they had experienced cat-calling and harassment, which is completely insane these number have stayed the same and it is now 2018. When thinking about it these acquisitions men are getting from making comments about any little thing they see on a woman's body are making them feel as though anyone will brush off their comments and go on with their day. In reality this doesn't work that way, there are many risks but the main risk of stranger harassment to mental health is its effect as a chronic stressor a stressor can be any environmental or external event  that causes stress to an individual, which becomes chronic when it is experienced on multiple occasions over time. The effects placed on anyone creates difficulties of actually feeling safe while even working or just walking out of their front door into their cars. It's insane. All of this research will help everyone see that they are not the only ones going through catcalling everyday and how it is not their fault at all but the thirsty men out there that feel as though it is their job to compliment a woman without realizing them feeling unsafe or even threatened.

These are the statistics of Street Harassment in the United States.

All of my research has impacted the way I have started to think about catcalling. What I am truly wondering about is what if the tables were switched and women were making these comments. Would the men feel mentally and physically unsafe or will they just take everything as a complement and boost their confidence about themselves. Also what is going on to stop or bring awareness because when looking at the data there is hardly any current information from 2018 only from the span of 2008 to about 2015. What I hope to learn about while going on is how to make this problem significan at this very moment because of all the data being almost 10 years old when trying to find information about something that is occurring all over the world not just in the United States. I want to make this known again and show that no matter what peoples opinions are that they need to take a stand and make something happen. 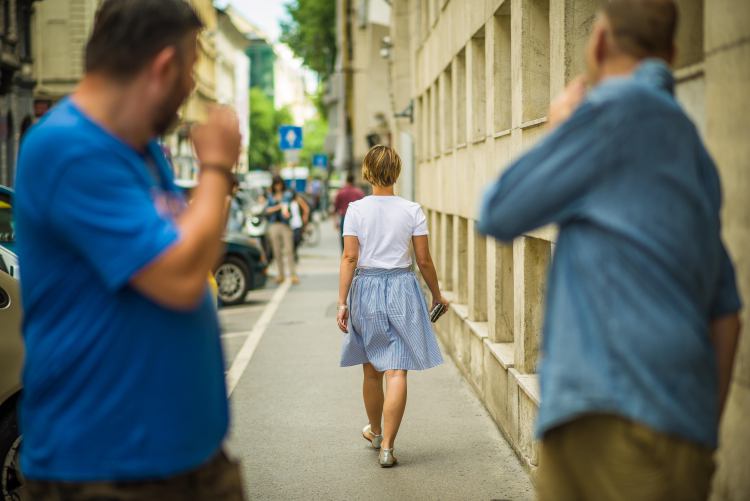 Catcalling isn’t just in the United States it is happening around the world this image was taken in France.

If you want to check out more of my research check out my Annotated Bibliography:

That's an awesome suggestion from Elena. I wonder if starting there for your Original Research could lead you to a cool idea or opportunity for your Agent of Change, too.

You did a great job balancing out your writing between personal and professional, and the infographics grabbed my attention. For your Independent Research, there's an anti-harassment organization in Philly called Feminist Public Works that is working to end street harassment in Philly