All of my research from post #1 has impacted the way I have continued to think about catcalling. My research before was about how growing up is not as easy as it may seem, especially if you are a young woman. Men have grown up in this society where they feel the need to make comments about our bodies without thinking twice about it. As women we do not appreciate theses comments. Obviously some women feel as though they enjoy the attention and feel as though men are doing nothing wrong going ahead and commenting on their bodies. They don’t think about how some girls can be 12 with a well developed body that makes them perceive as a woman at least 18 years old. So men believe it is okay to make sexual comments towards them without thinking that they may be under the age of consent.This is when catcalling becomes such a thing that needs to be seen and made aware to the world. When doing this second post I had did my own observations by making women take a survey and tell me how they feel about Catcalling.If you would like to view my first post the link is here. 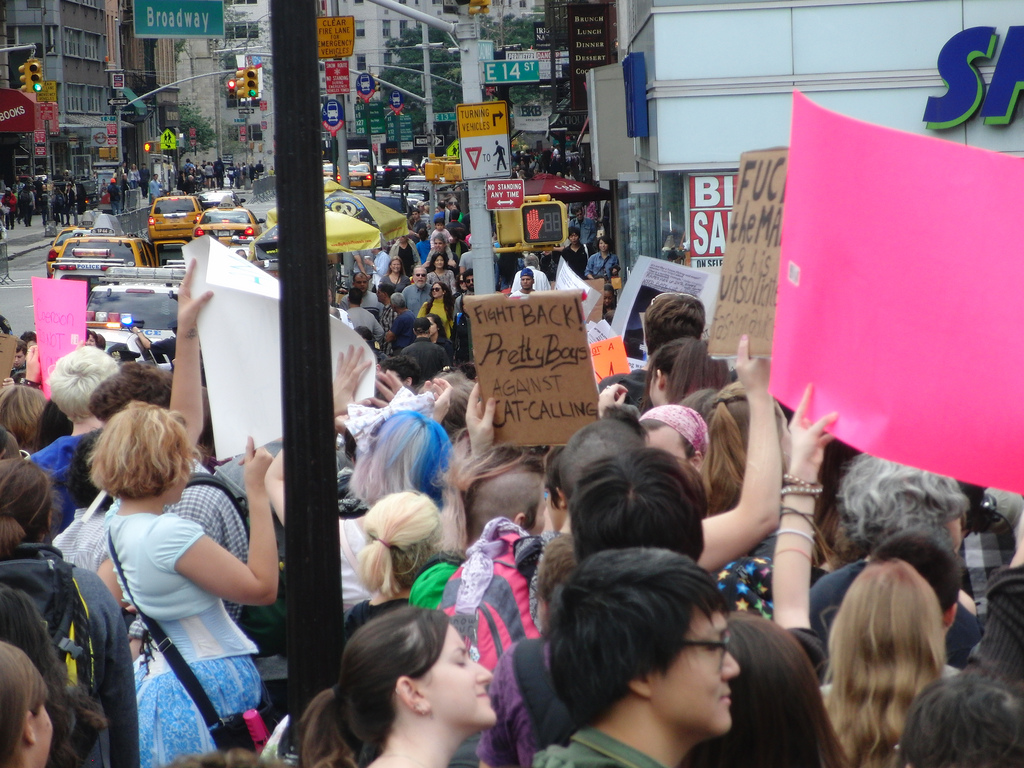 Since the last post I have taken the initiative to dig deeper into the stories I have found on the internet and see what stories I can get on my own. At first I found some credible sources from women writing about what had done to make awareness of catcalling and their personal experience. As Rachel Hosie had said,“For me, it has always been more than an annoyance. It’s shaped my experience in public space. It’s affected my confidence and comfort walking down the street. It’s silenced me ― I’ve never felt comfortable responding to catcalls, as much as I’d like to tell these men off.” When I seen this article it made me think back into my 1st post and realize the connection between both. Each of the articles I had forund had a way of saying they needed something to change but neither one of them had done anything. They had just said they wanted to do something but writing about it was their way of getting something done. In this tense though this time someone wrote about how they felt and also even made a way to bring awareness. Rachel had put sidewalk chalk in bins in NYC where she let women right different catcalls they had received so, women and men were able to see that first catcalling is not a right thing but also to show to the women that they aren’t alone.

This article made me realize that if one person feels as though this way then multiple people may also so, I created a survey with a couple multiple choice and short answer questions that would help me get information for my cause from different age groups to be able to see how they view catcalling. This did take a little longer then expected trying to get responses since not everyone feels comfortable talking about their experiences or giving up about 5 mins of their time responding to this survey. At the end I had received about 80 responses giving me more than enough stories and their personal opinion about catcalling to write about. At the end of everything the results were very shocking. After all the responses I was still left wondering if there is anything that can actually be done to change and get through men's heads that catcalling is not okay. 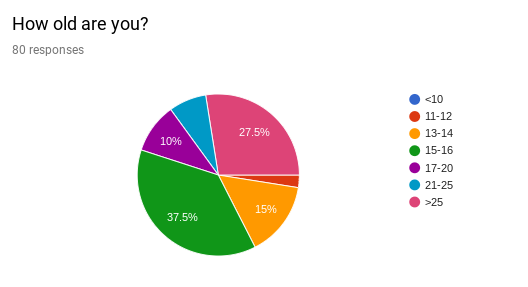 The first question of my survey was How old are you? This was to get a general idea of the age range I was retrieving from survey takers. Majority of the people that had took the survey were between the ages of 15-16 making them freshman or sophomores in high school. With some of the data you can also notice that I had some survey takers that were between the ages of 11-12 which opened my eyes as soon as I looked at the data because it shows how not just adults receive sexual comments made towards them. This also relates back to the article in Post 1 about the statistics showing kids between the ages of 11- 12 recieve comment from men of all ages because of the way child may look may seem as though they are older then they truly are. 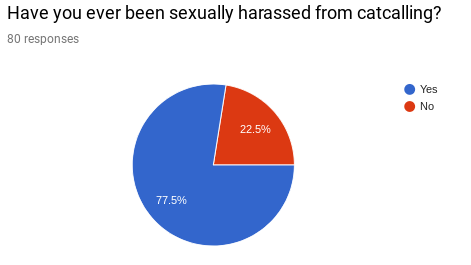 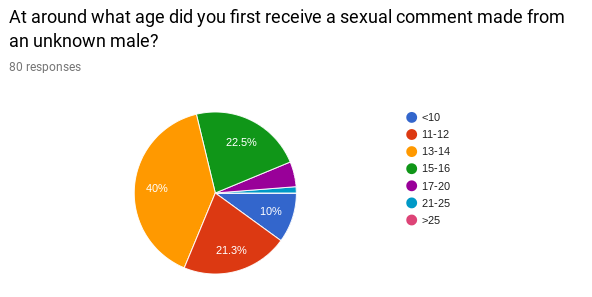 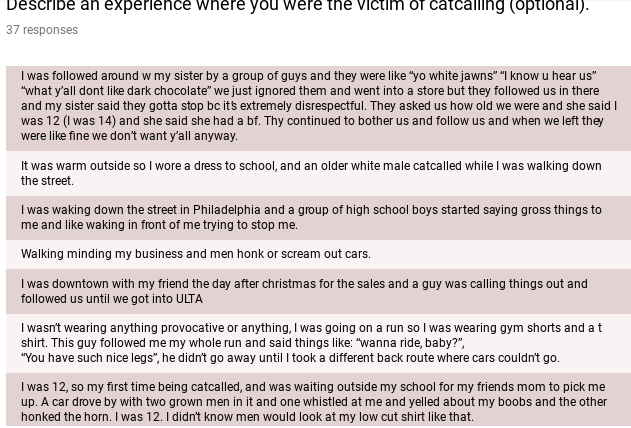 Now here is my third and fourth question: At around what age did you first receive a sexual comment made from an unknown male? And describe a time where you were the victim of Catcalling. This is when information received changed the way things were seen. When you look at the  the graph is is showing about what age did each women receive their first catcall. Majority of the people said they received their first catcall between the ages of 11-16. These were the 3 top age range that had gotten any type of sexual comment made to them. Then their is personal experiences given by 37 of our survey takers. Each of them gave a personal story they felt they would share for this project. This was the exact part that made me say wow. How can so many people have so many experiences with catcalling that could of lead to so many more serious problems; mental issues, low self esteem, and much more. 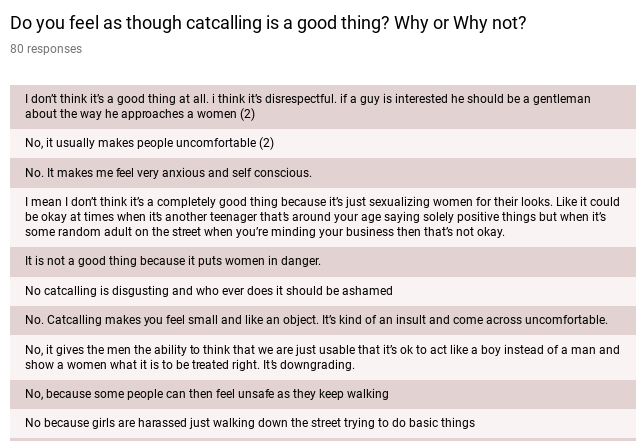 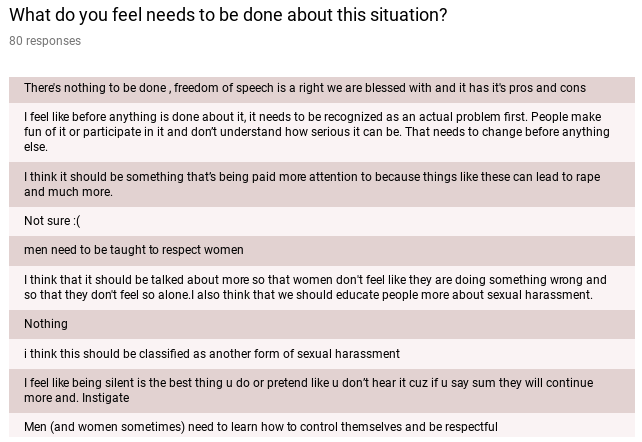 While looking at these two answer charts that I received from my survey made me realize that majority of the women feel as though catcalling is not a good thing and they really do not know exactly what to do to stop this situation because of the comments making women feel unsafe around their surroundings but also make them feels as though they are objects and not human beings and this is something that has been going on for so long that they feel as though that nothing that maybe thought of will change the mindset of a man to stop from making these degrading comments to women.

When looking at all this information I received It made me realize how many women go through catcalling on a daily. Also some of their stories showing how rude men or if you may want to call them boys degrade women with harsh comments that they feel as though will do no harm.This all adds to my research because I was able to see this for myself and not get this information online where I wouldn’t know if some of these stories were false, but when i had read some of my survey takers experiences it showed me that this is something that needs to change even if it isn’t a immediate change something need to give.

At the end of this all I am still left wondering what I could do for my Agent of Change because there are so many things that I could do to bring awareness. I feel as though if i put something together I can make a short film having women speak about catcalling and post it and see where it leads from there. Obviously this is one idea I hope to think of something more thoroughly.

I like your idea for your Agent of Change, I think that maybe you could post it on youtube and maybe put a small portion of it on social media so that people see it