If you have been following my recent posts about Transphobia you can tell that I have a strong passion against hate crimes and the rate that hate crimes occur against transgender people. Hate crimes towards transgender individuals has gone up by 300 since January of 2016. There have been 24 transgender people killed since the beginning of 2017. In the process of learning about Transgender hate crimes and experiences, I decided to go out and interview two people. One, who deals with transgender patients when teaching them about safe sex. The second person is a transgender male who came out at an older age. I interviewed him about his life and struggles as a trans person. He then proceeded to tell me about the hate he received from his own family after coming out and how isolated he was for years.

For privacy reasons we will call this trans individual John. John then told me he was kicked out of his home at the age of 16 and lost all communication with his parents for years. The only person he had contact with was his sister.

He was homeless for several years and had to provide for himself. In my latest research 40% of LGBTQ youth are homelss and John was apart of the 40%. Throughout my years of knowing John I would have never expected such a painful story from him because of the way he presents himself. This is a first hand experience showing to never assume things about people and their story.

To further my research I interviewed a worker at Children’s Hospital Of Philadelphia, Yexsy Alicea . His job is to educate trans youth on safe sex. He deals with a lot of patients whose parents are unsupportive and leave them to educate themselves on how to support their lifestyle. He talked about the amount of stress his transgender patients have in using public restrooms. All the hype in the media about what restrooms trans people can use has caused a restraint on them actually using the bathroom. 59% of transgender people avoid using public bathroom and there is approximately 1.4 million transgender people in the United States. In 2016 a survey in New York went around that 27,715 people answered. 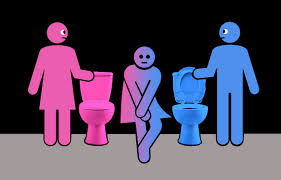 It founded that 12% of transgender people have been verbally abused, 1% physically attacked and 1% were sexually assaulted in the restroom. After this survey was taken North Carolina passed a Bill which forces transgender individuals to use the bathroom that corresponds with their gender at birth. North Carolina Governor Pat McCrory said this Bill was necessary to “protect our children” and “preserve traditional values.”

This post is great! It's very informative and provides a lot of knowledge about the topic. The people you interviewed seemed to help you a lot with understanding.

Great job on your original research! Your choice of interviews were wonderful. And I really enjoyed your writing. There were some punctuation errors but nothing major.

Great job with this piece Ashton! This really shows how you want these hate crimes to stop

Trans oppression is a huge issue in the US, especially under our current presidency. I'm glad somebody's taking this topic on let alone a strong speaker with a strong opinion and a good deal of experience.

I really like your post you added facts I never knew about and it is good that this is something you are passionate about.