Posted by Melissa Alvarez in English 1 - Dunn on Wednesday, April 10, 2013 at 11:43 am
My Benchmark about Macbeth revolves around the thesis:"With her desires as the motivation and her husband as the armor, Lady Macbeth sets out as a power hungry wife who will soon dissipate into a regretful pit of emptiness". I wrote a thesis essay discussing the downfall of Lady Macbeth throughout the play and represented the same thing with my creative portion. For the creative portion of my benchmark, I made a sculpture out of air-dry clay. My sculpture was of a tree. Half of the tree has strong growing branches covered completely with leaves and the other half contains bent, empty and bare branches. The tree was made to represent Lady Macbeth's journey through the play. She began as an ambitious woman who knew what she wanted and how to get there (the leafy half), and then starts to lose sight of who she is and eventually kills herself in the finish (the empty half).  My quotes tie in with objects. I have a golden crown at the top branch to represent her desire for the Queen title and riches. For my second quote I have a bloody hand holding a white heart to represent her equal guiltiness to Macbeth's killing and the fact that he's the only one being a coward.For my third quote I have a stool under the tree to add a humorous touch, the quote being: "Why do you make such faces? When all's done, You look but on a stool"(Act 3, Scene 4, Pg.52, Lines: 62-69)".For my fourth quote I drew foot prints under the tree to represent Lady Macbeth's sleep walking. For my final quote I have a pink noose hanging off one of the branches to represent Lady Macbeth's suicide.
My process took  total of 8 hours. I had to go out and find the right type of clay, find the right tools and then figure out how to make a tree out of clay pretty much. It was very slow because I had to carve indents to make the bark look realistic. I had to paint the tree brown all over, then I cut out every leaf one by one and glued them on one by one. Shaping the clay was a little difficult but I got the hang of it. I'm most proud of the objects I chose to represent every quote and being able to explain them pretty well. I don't think I would change much besides finding a better looking box and to write the quotes on it. From my colleagues I learned about their artistic representations of their chosen character. People had poems, movies, drawings, games, etc. And from myself, I learned that hard work does really pay off. I spent 8 hours on something I'm kind of proud of to show the class. 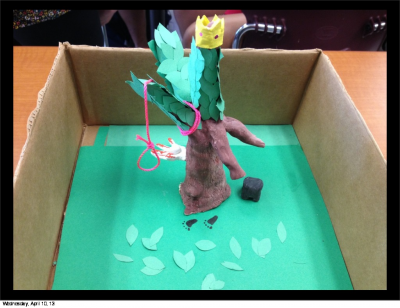