Posted by Dakota Foster in English 2 - Block on Thursday, January 5, 2012 at 8:19 pm
Introduction & Reflection
I never seen myself as a person that could have a language identity. I thought I spoke like everybody else. I thought that people who only spoke more than one language could have a language identity. Kids that translated for their parents or people that had to learn a new language for their public life vs. their home life. I thought I was just any ordinary Philadelphian with an Philadelphian accent. I didn't think I was judged for the way I spoke, but then I took the time to look back at my life. I remember the different schools I went to and the events that happen there. *BING* An idea came to me, I do have a language identity. The fact that I use different slangs that aren't stereotypical with my ethnicity and I found out that was something amazing to write about. Other people were writing about home language vs. public language, when I can talk about a more unique topic. The idea of slang for different races.

When, I started writing this paper, the words and scenes came with ease. I just remembered everything that had to do with the different slangs. I was amazed by the fact that I could remember everything. After writing and rewriting, I finally got my final product that I am proud. I hope you enjoy it too. (:

I always thought that language was just something that people used to communicate. I didn’t know that there were different accents until I got older and on top of that; I didn’t know there were different kinds of languages. Then I found out there were slang for different races and I wasn't speaking the right slang. I remember when I was little I didn't know the difference between white and black, I thought we were all the same. However then, I went to an all white school, everything changed there.

On one hand, I hung out with all the white kids most of the time because there weren’t a lot of black kids in my class. On the other hand, I would hang out with all of black people when I went home. I started to realize that I wasn't really using the words that the other black kids used. I didn't know all the slang words. For example, 'joe' or 'outtapocket' was used by black people, it meant someone was being stupid or unfair. While on the other hand, 'rad' or 'gnarly' was used by white people, which means awesome. They are many other words like 'jawn' which is a noun for black people. Another one is 'stoked' which means excited about something for white people. I used the words that would be used by white people more often, so people said when I talked I sounded white. It reminds me of my mom, because people would always tell her that she sounds 'white'. I didn't really understand what that meant. Then, her friends started to say that I sound 'white' too. "Cheryl, your daughter sounds just like you. Hahahahaha," my mom's friend Arnita would always say.

"What are you talking about girl,” my mom asked confused.
"She sounds like one of those little white girls, just like you."
"I think she sounds normal, Arnita. Don't be crazy."
"I just think you need to blacken her up a bit."

I went back and forth from the white slang and Black English, as I got older. My friends always told me that I sounded different. When I was with my black friends, they would say that I sound too white. When, I was with my white friends, they would say that I sound black and they love having me around. I always thought the way I sound was just like anybody else. One day, it finally came to me; I realized that I don’t really use Black English at all. I was texting my friend Fareed and he was just using words that I couldn’t even understand. The next day, he came up and talked to me about it. “Dakota, why do you spell out all the words when you text,” he asked.

“Why do you shorten so many words? I can barely understand what you are saying!”

“That’s how everybody texts, you are the only oddball. You text like a white person, using ‘dude’, ‘bro’, and spelling out everything.”

“I don’t think you are right, my white friends say I text like a black person.”
“Then, you are just an oddball.”

I was stuck between a rock and a hard place. I was either too white or too black. I felt like I was being judged everyday by my friends. What kind of friends judge because of the way someone speaks? I strongly believe that is wrong. I was just black enough to fit in with the black people, but just white enough to fit in with the white kids. While they could still be respected because they had a black friend, I felt like I was being taken advantage of by my white friends. On the other hand, I felt like I wasn't appreciated by my black friends.  I could never just be enough for anybody, expect for my mom. When, my mom was younger, she had the same problem. People would tell her that she sounded like a white person.  I was surprised that I was having the same problem as her. Even though, she was there to tell me what to do, I still couldn’t help but feel horrible. I couldn’t fit in with my friends and they always manage to bring it up.

“That movie was bangin’! We should go see that jawn a second time!”
“Yeah guys, that movie was gnarly,” I squealed.

"What? Dakota. What are you even saying?"

"Hahaha! Gnarly means awesome? That is some serious white language. How about you just grab a skateboard and ride off with a white boy? Hahahahahahahaha," they said and all laughed in unison.

"Dakota, we love you to death. It is just the things you say sometimes are just not the blackest things. We are going to have to blacken you up a bit. Good thing, you go to an all black school."

"Whatever, guys,” I said unhappily.

“You have to speak the slang words like us, Dakota,” my friend insisted.

“I don’t want to use slang, I like sounding intelligent and being proper.

“So you are saying, cause we black and speak slang, that we are stupid?”

“No, I am saying that since you use slang, you sound stupid.”

“Well, all black people use slang.”

“Well, I guess I am not going to use slang.”

I had no idea that a person could be 'blackened'. I thought the fact that I was black meant I was 'blackened'. I started to find out as I got older that it doesn't mean the same thing. People started being rude to me because the words I was using weren't the words that I was stereotypical suppose to say. Then on top of that, they are basically calling themselves stupid because they are using slang. I am not going to be called stupid because of the way I talk when I can control it. I am not going to be a stereotypical black person. Some races think that African Americans speak the language of the poor, which reminds of a quote from the story How to Tame a Wild Tongue by Gloria Anzaldua. “Chicanas who grew up speaking Chicano Spanish have internalized the belief that we speak poor Spanish. It is illegitimate, a bastard language.” Black people may not think they are speaking the language of the poor, but it is a known fact that black people don't get jobs because of the way they speak. I am not going to downgrade myself because I dream big and my dreams are going to become reality. So, my friends are just going to have to deal with the fact that I talk like 'white person', or they were never real friends. 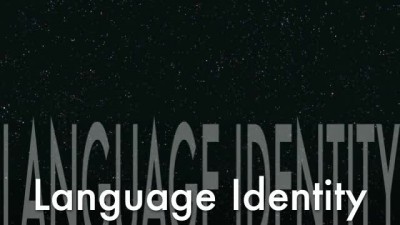