In The Taming of the Shrew one can see how Baptista, the father of Katherine (also known as Kate) and Bianca, has a certain standards for the men his daughters would marry. Katherine being lucky even to just get married, due to her bad attitude. While his second daughter, Bianca is to marry a man that fits his requirements or at least approaches his requirements. In the year of 2002, during My Big Fat Greek Wedding, a woman falls in love with a non- Greek man. Which does not fit her father’s requirement, for he wants a Greek husband for his daughter.   This makes her love life more complicated than she wanted. The Taming of the Shrew and My Big Fat Greek Wedding both have characters in which are not giving up till they get their wanted spouse.

While taking in account their thoughts and requirements of family members, Bianca’s and Toula’s fathers both have requirements for their daughter's spouse. There is a difference in what the expectations are while one is looking for the wealth (Baptista), the other father Gus is looking for the right ethnicity. This shows how parents still have high expectations and requirements for their child's spouse. Even though in modern era people have more freedom to love and marry who they want. Diminishing the power of parents, for today the younger generation is not frowned upon (as much) if they don’t listen to their parents.  Yet still parents have their say and expectations in their child’s marriage. Toula’s father, Gus from My Big Fat Greek Wedding shows how proud of a Greek he is. In the scene below, Gus states: 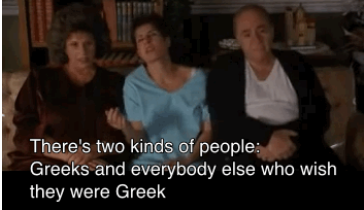 This quote shows just how stuck up Gus is about being Greek. Always telling his family and especially his unmarried daughter about how Greeks are the best and that no one else can be like them; meaning that ‘you can only marry a Greek boy for he is the best.’

In The Taming of the Shrew Baptista has different expectations for each daughter for the attitudes they have. For Katherine his eldest daughter Baptista just wants her to get married. But due to her sour attitude towards all especially men, it is hard to find a suitor for her. With saying such, he also wants Katherine to get married before Bianca. Bianca is known to be much more fair, sweet, and kind. Meaning that everyone wants to marry Bianca while they are all being held back by the older sister which cannot find a spouse to marry her.  In act 2, scene 1, lines 361-364

‘Tis deeds must win the prize, and he of both

That can assure my daughter greatest dower

Shall have my Bianca's love.“

Here Baptista tells suitors of Bianca, that are fighting over who will marry Bianca; Baptista responds to both of them saying that whoever has more to offer (Deeds), wins and gets to marry his daughter. Deeds meaning wealth. Who ever has more, wins the ‘prize.’  In My Big Fat Greek Wedding the father of Toula, has the key requirement of her spouse being a greek boy. In the scene below, Toula is in the car with her father and narrates listing the three things nice Greek girl are supposed to do in level

“Because nice Greek girls, are supposed to do three things in life. Marry Greek boys, make Greek babies, and feed everyone till the day we die. “

It seems that there is one mission for Greek girls and then after that there is nothing else. Just to meet the required spouse and then make children and keep being the housewife. In The Taming Of The Shrew Kate and Bianca have been given a mission to get married and to take good care of their spouse.

My husband and my lord, my lord and husband,

I am your wife in all obedience.

Here in the induction Sly has no doubt understanding that he is the dominate one in this relationship. Giving him a raise in thought and control. Showing how in a relationship how love it not only counted for but how the control in the relationship; changes many keys. 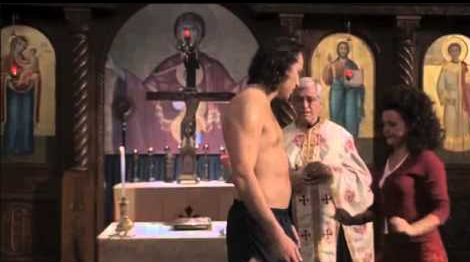 “It is your lucky day to be baptised into the Greek Orthodox Church!”

Later on his friend, Mike states how Toula’s family has Ian wrapped around her little finger. Ian tells Mike that he loves her and will do anything in order to be with her. Here there is a different definition of love; that you will do anything in order to keep your spouse happy and to be with them. Yet the control is used in different ways. In The Taming of the Shrew control is used in order to tame others and for that person to only get what they want. Toula’s family may be doing the same thing; just the other person in the relationship has to pay the toll. Ian does it for love, as Katherine coops with some of the things Petruchio says in order to just get to what she wants. Like a bribe ‘I will take you to your father if you prove my control on you.’

Petruchio:  I say it is the moon.

Katherina:  I know it is the moon.

Petruchio: Nay, then you lie; it is the blessed sun.

Katherina: Then, God be bless'd, it is the blessed sun;

But sun it is not, when you say it is not;

And the moon changes even as your mind.

What you will have it nam'd, even that it is,

And so it shall be so for Katherine(Act IV, Scene 5 ).

Love has many tolls in which it’s romance may not last forever. Yet the control is something that most try at in order to show the love in the relationship. That control can also be used when trying to make the spouse meet up with the requirements. Parents have always had a huge say in their children’s spouse. With the requirements they made in order to have a good spouse for their child in order to set them for a ‘good’ future. The child’s say today is what has really changed. For when Kate got married to Petruchio she did not agree, and never tried to marry him. She was just put into that spot where she had too. While Toula had much more say and actually got what she wanted; to marry Ian. In this era the child has more say yet as requirements may differ at points in the end the one with more control, makes the other partner change in order to fit certain requirements.

I really liked your topic. Your comparison between Baptista's desire for a rich son-in-law and Gus' desire for a greek son-in-law was really interesting. Overall good work.