Posted by Fatu Castillo in Capstone on Thursday, May 18, 2017 at 2:42 pm
​    For my Capstone Project, I decided that I wanted to pursue three things.
The First, crochet baby blankets and donate them to The Children's Hospital Of Philadelphia on Mother’s Day. The second, organize a crochet club to help interested students learn to take up the craft. And third, enhance my personal skills as a sewer and a knitter by taking up projects that expanded those skills
None of which were exactly challenging; more so, they were all time-consuming.
The first one, making and donating baby blankets, was the most complicated of the three. I had to work with limited time and finances, so I settled on making two blankets a week until I reached twenty-five blankets. To save on supplies, I decided to make all the the blankets triangular with slight variations to add a personal touch to each of them. Even with this though, I only was able to make ten, due to lack of finances and time. Personal labels bearing my name were added to each blankets to help compensate for the lack of quantity.
Crochet Club was easy enough to organize, advertise, and find a teacher sponsor with. I never wanted to assign a group project, so I helped individual members pursue projects that interested them.
Though most of my time was consumed by managing Crochet Club and making blankets, I did take up knitting and sewing projects. Including my mentor and I doing a joint knitting gproject together with regular check-ins, and repurposing clothes. 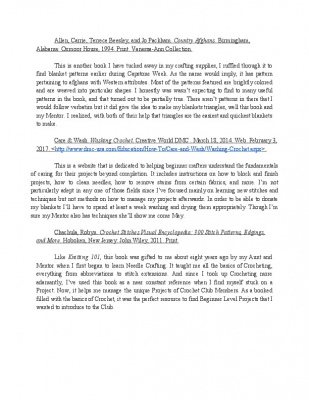