Kick-Ass is about Dave, a 16 year old kid that fights for the good. He ends up killing a villains father for justice. Afterwards the villain wants revenge for what he did. He walks around NYC to defend and protect people, with the help of his friends. Eventually he takes out the supervillain and saves NYC.

This movie passes the bechdel test. How you may ask? Well in the movie there a scene where there is a group of girls in the lunchroom talking about popularity, clothes, and well feminine things. One of the main characters Mindy aka Hit Girl usually dresses as a “regular female” no makeup, no dress, no ordinary life style. During this scene in the beginning Mindy decides to put on nail polish, lip gloss, heels, and a nice dress. She walks up to a group of girls that are “popular”, they eventually start saying she can’t be like them just because of what she wears. 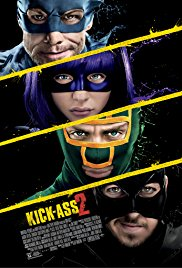 The Pursuit of Happyness is about  a man that goes broke and tries to support his family. Going through all the struggle the only motivation he has is his son, his only child, his only family member left.

This film passes the test that I made up.  At least two black males that talk to each other about motivation. In the film there is a certain scene that shows Chris Gardner and his son playing basketball. Chris tells his child, “You got a dream you gotta protect it .”