Since about 7th or 8th grade thereabouts, I have taken an interest in the concept of public transportation, for various reasons. From the various ways in which it can make for so much more efficiency, to how it moves through cities  and what parts of the cities, to the various different types of it, there is really a lot more to it than we think about. We take for granted a lot of these systems. People don’t know, or really think about this for that matter, but there is a lot to deal with, and a lot of planning and maintenance that goes into these “major arteries and veins” of sorts.

For my project, I came up with and designed a fictional SEPTA metro rail line that would connect some of the major inner suburbs, such as Upper Darby, to South Philadelphia and Penn’s Landing and the Delaware waterfront of Center City. The line was created with the goal of connecting areas that are not well connected at all by the current public transit system. These newly connected areas, of course, include rather important locations, notably the stadiums. This line is the Suburban Hook Line. 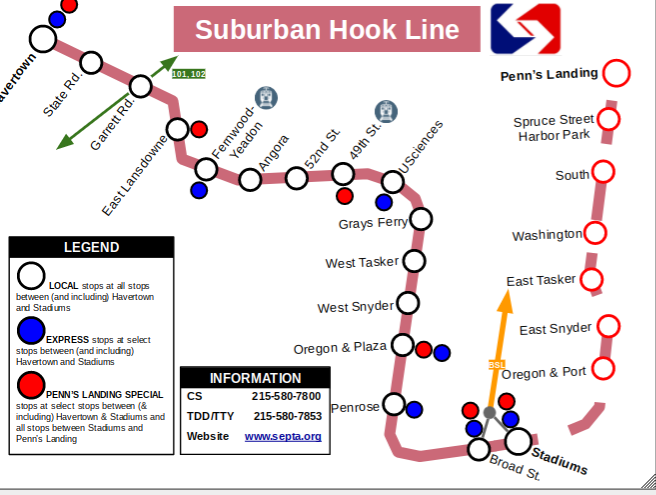 The Line follows a “hook” shape, giving it its name. Looking at the map, the line has three services. The First one is the local, which stops at every stop between Upper Darby and the Stadiums. The Second, is the express which stops at a few stops between Upper Darby and the Stadiums. The third is the Penn’s Landing Special, which stops at a few stops between UD and the Stadiums and then goes local to Penn’s Landing. I had decided that this would be the best schematic when creating this. To determine all of this, I did a lot of research. I did research on where the tracks would be, what kind of vehicle would be best, and how the system could run the best.

For what I learned, well, I’m really not quite sure what to say. I learned about old train right-of-ways that I did not previously know existed. When I went in to this though, I already kind of knew a lot of this stuff. I suppose you could say I learned more about certain transportation connections and suburban areas that I previously did not know much about. I also learned about a few new SEPTA plans and projects, including the “Direct” BRT (Bus Rapid Transit) Line.

I am honestly, as of now, not sure what the future holds for this idea. I may drop it due to coming up with an even more efficient improvement on it. Or, I may go big with it and one day take it to SEPTA as a legitimate proposal, who knows. Where I stand now though, I am not sure what I am going to do in the future with this idea, but I will likely still hold onto it.

Bibliography/Sources can be found here.