Posted by Gina Sorgentoni in Capstone - Pahomov - Wed on Thursday, May 19, 2016 at 9:21 am
​Students today have extremely high stress levels, especially at SLA. During benchmark season, there isn’t a relaxed student in the building. That is what inspired my capstone, I wanted to find a way to help lower student and staff stress levels. After doing some research I discovered that many universities and colleges bring dogs on campus during finals to help lower their student’s stress levels. I started by doing research on studies that showed owning pets help lower stress levels. I decided to bring cats and dogs to the building and have the SLA community become engulfed in the joy that is kittens and puppies, with the hope that it will bring stress-levels down. I reached out to Morris Animal Refuge and together we organized the Pet de-stress day; for one afternoon we had one dog, four kittens, two guinea pigs, and one rabbit. Students and staff were able to interact with the animals, the best part being that most of the animals were adoptable. Not only were students able to relax, but the interaction with people was therapeutic to the animals. The event was a huge success, and it was easy to see that students went into the event stressed and came out relaxed and happy. It was great being able to see the reaction the students had and hearing their feedback on the event.
The video below shows highlights from my capstone. 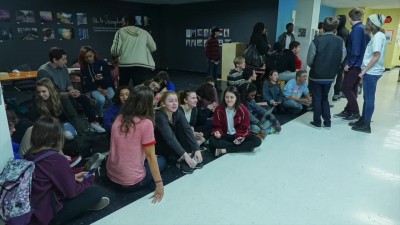 Aleccia, Jonel. "Teens More Stressed-Out Than Adults, Survey Shows - NBC News." NBC News. NBC News, 11 Feb. 2014. Web. 05 Feb. 2016. <http://www.nbcnews.com/health/kids-health/teens-more-stressed-out-adults-survey-shows-n26921>. This source shows that students are just as stressed if not more so than than the adults around them. The article also stresses the importance of breaking the cycle of stress for students, stressing the importance of students receiving better support in their school and home environments. The article also talks about the idea that social media bring students more stress, since that follows students around everywhere relentlessly. Many students also have the stress of performing well in their classes and extracurriculars, the combination of all the pressure put on students leads to depression and anxiety. A large issue with this is that student are not taught how to properly manage and control their stress levels.

Benedictus, Leo. "Sick Cities: Why Urban Living Can Be Bad for Your Mental Health." The Guardian. Guardian News and Media, 25 Feb. 2014. Web. 05 Feb. 2016. <http://www.theguardian.com/cities/2014/feb/25/city-stress-mental-health-rural-kind>. This source compares stress levels between people who live in the city and those who live in the country. A group of people were put into stressful situations -solving difficult math problems, rude instructors- and their brains were scanned for their levels of stress. The two sections of the brain that deal with stress were shown in the scan. Compared to country dwellers people living in the city had considerably higher stress levels. Even compared to those living in a small town, city dwellers had the highest level of stress by far. I wanted to use this source to highlight how utterly stress people living in the city are, even if we do not realize it.

Borchard, Therese J. "6 Ways Pets Relieve Depression." World of Psychology. Psych Central, 19 May 2013. Web. 05 Feb. 2016. <http://psychcentral.com/blog/archives/2013/05/19/6-ways-pets-relieve-depression/>. This source gives the detailed run down about how dogs and cats help with depression. Though it only gives six reasons, they are all valid. The source gives reasons as to why owning a pet is a positive thing. It highlights what I want people to know about having a pet, and brings in a lot of the physiological reasons that have been left out in previous articles. It gives the physiological benefits of each category. Things like unconditional love and acceptance and giving the owner responsibility all have positive impacts. I feel that if more people knew how beneficial it is to own a pet, there would be fewer animals in shelters and more in loving homes.

Falcone, Alissa. "Drexel Becomes First University to Host a Permanent Therapy Dog in a Recreation Center." Drexel Edu. Drexel, 25 Sept. 2014. Web. 5 Feb. 2016. <http://drexel.edu/now/archive/2014/September/Drexel-Therapy-Dog/>.I chose this source because it shows the direct benefits of a therapy dog with students. Even though my event will be held outside of Science Leadership Academy, students will have access to the event. Also, since it will be held in a public place there will be a more diverse group of people than just students. The article talks about the long term plans they have for the dog and how students will be able to access him. Though this source does not talk directly about the benefits of having a therapy pet on campus, it shows how more schools are moving forward with the idea of using pets to lower stress.

Jayson, Sharon. "Teens Feeling Stressed, and Many Not Managing It Well."USA Today. Gannett, 11 Feb. 2014. Web. 05 Feb. 2016. <http://www.usatoday.com/story/news/nation/2014/02/11/stress-teens-psychological/5266739/>. This article goes into teen stress statistics. The source goes in depth of people being extremely stress at a young age and how it carries over into adulthood. The article states that teens with high levels of stress are more likely to have a shorter lifespan. It goes into the reality of what it is like being a teenager trying to balance everything. I wanted to have this article as a source to show the reality of teenage stress and how negatively it impacts us. It shows how stress is directly linked to depression and anxiety among teens. It highlight the fact that teenagers under severe stress now are more likely to have severe illnesses later in life.

Kahler, Susan C. " Unmasking the Shelter Dog." Unmasking the Shelter Dog. Journal of American Veterinary Medical Association, 18 Mar. 2015. Web. 05 Feb. 2016. <https://www.avma.org/News/JAVMANews/Pages/150401a.aspx>. This source talks about the stigmatism surrounded by shelter animals. A large part of the article is spent dispelling various myths about shelter animals. Animal behaviorists are working to dispel the remaining myths about shelter animals. Studies are being done on animal aggression and food guarding. I wanted to use this article in my sources to show that there is a stigmatism of aggression in shelter animals. Since that myth is a reason many shelter animals are left unadopted. The article also shows that the new owner’s interacts with their pet has an impact on the animal’s behavior. The article also talks about euthanasia versus putting an animal in a shelter.

This first source was my initial inspiration for the project. Though I know my project will not look exactly like this, it is the general outline of what I want it to look like. Originally I just wanted to have an adoption even to get animals adopted, but through this video I decided to try and gauge other’s stress levels. This gave my capstone the goal to try and help lower stress levels of others. Because of this video I will now gage with the participants asking them about their stress levels before and after the event. Perhaps, if there is a nice turn out, I will film it and make a small video.

Rovner, Julie. "Pet Therapy: How Animals And Humans Heal Each Other."NPR. NPR, 5 Feb. 2012. Web. 05 Feb. 2016. <http://www.npr.org/sections/health-shots/2012/03/09/146583986/pet-therapy-how-animals-and-humans-heal-each-other>. The article shows that there is a mutual benefit between humans and their pets. Not only would the even help people in the short term, but it may also get some people to adopt. That would help both parties in the long term. It helps us distress, and lower our blood pressure, and it puts animals in a more social situation. Playing with pets has the health benefits of exercise for both parties. With this event I would like to highlight the mutual benefits of having a pet, and adopting. I selected this source because of how well it highlights the benefits shared between people and pets.

Weaver, Jane. "Puppy Love- It's Better than You Think." Msnbc.com. NBC, 08 Apr. 2004. Web. 05 Feb. 2016. <http://www.nbcnews.com/id/4625213/ns/health-pet_health/t/puppy-love----its-better-you-think/>. This article goes into depth about dogs help with our mental health. It goes into specifics highlighting the fact that saying your own dog will lower your blood pressure. The benefits are seen clearly in owning a dog versus an unfamiliar dog or even a robotic dog. It shows that after about a half an hour both your and the animal’s blood pressure will drop considerably. The writer of the article compares it to the benefits of eating chocolate. It is also noted that this behavior is wired into how humans work, it is not something we learn over time. Exposing children to pets at a young age also helps lower their chances of having allergies and asthma.