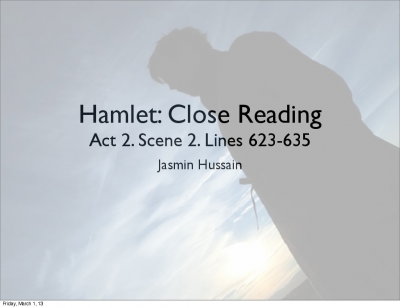 For murder, though it have no tongue, will speak

With most miraculous organ. I’ll have these players

I’ll tent him to the quick. If he do blench,

I know my course. The spirit that I have seen

May be the devil, and the devil hath power

As he is very potent with such spirits,

Abuses me to damn me. I’ll have grounds

More relative than this. The play’s the thing

Wherein I’ll catch the conscience of the king.

Shakespeare, I realized often likes to use exaggeration and he restates his thoughts for the play mainly throughout Hamlet’s soliloquies. This is a sophisticated and difficult strategy because Hamlet’s character throughout the play is not constant. His emotions and inner feelings for other characters change from scene to scene, however this is Shakespeare’s area of expertise and as always he succeeds in making the puzzle pieces fit together with skill and deftness.

The theme behind Shakespeare's play’s are always a topic of discussion and question. After reading the first few Acts in Hamlet it can be strongly stated that the theme behind Hamlet is language and what the human eye should believe. Who should Hamlet trust? Can he trust anyone? Will he be betrayed by those who are the closest to him? Throughout Act 2, scene 2 these questions come up in Hamlet’s path multiple times. Hamlet feels extremely joyous after reuniting with his two best friends from childhood, Guildenstern and Rosencrantz. He feels he can finally enjoy the presence of others and that it will be refreshing to see some new faces. However he starts to doubt his wishes when it comes to his realization that his friends are spying on him, as it is their duty to the new king. Nonetheless, the young prince of Elsinore believes he can use his friends by taking advantage of their presence when Guildenstern and Rosencrantz suggest Hamlet see a play performed by come players they met on the way to Elsinore, Denmark.


Hamlet still distraught over his fathers death, desperately wants to find the culprit behind his murder. Hamlet believing that his uncle Claudius, is the murderer wants to verify his suspicions. “For murder, though it have no tongue, will speak” (622). Because murder is an action that can not speak for itself, it can never be vocally expressed and Hamlet knows that Claudius will never admit through words that he killed the king,  therefore murder can only be seen. Either the action being committed itself or the admitting of the crime. At this part in the story Hamlet wants to find a way to test his uncle and see the face of the murderer. He believes that his suspicions will confirm the moment the crime speaks through his face expressions.

Hamlet then formulates a plan to reveal his uncle’s crime. Shakespeare does a very exceptional job as he stirs up a really creative nature into Hamlet’s character in this scene of the play. Hamlet wants to lure his uncle into a trap without giving away his suspicions so he organizes the play. “With most miraculous organ. I’ll have these players / Play something like the murder of my father / Before mine uncle.” (623-625). Again the language theme rises again as Shakespeare orchestrates a play with in a play. He fiddles with the idea that something very unexpected can happen very soon, thus building up the suspense as the audience craves for more knowledge.

Hamlet knows that Claudius can not gain any information about the specifics behind the play. Because as a king of Denmark a minor play is very insignificant and is not of importance. At the end of Act 2, Guildenstern and Rosencrantz report back to Claudius, and they mention how their will be an extraordinary play being performed later by some players that were roaming around Denmark. Claudius is completely oblivious to the fact that Hamlet has an entire scheme in place behind this play. He thinks that the play is simply entertainment and it will get Hamlet’s mind off of other things such as his fathers death.

The following lines of Hamlet’s soliloquy is “I’ll observe his looks; / I’ll tent him to the quick. If he do blench, / I know my course.” (625-627). Shakespeare continues to make sure the young prince proves himself to be more brilliant as the scene progresses. Hamlet knows that the contents of the play will come as a big shock to the new King. So as stated in the line “I’ll tent him to the quick.” (626) Tent, means to investigate by drawing one into a trap. This is exactly what Hamlet believes his plan will do. Claudius does not expect the play to be about the King’s foul death. Claudius also is not aware of the fact that Hamlet will be keeping an eye on him during the performance, therefore he will not be able to compose his face of any emotions. So Hamlet decides to observe his uncle’s face throughout the performance. If Claudius flinches or make a sudden movement during the killing of the king then Hamlet will know if his plan was a success and if his suspicions about Clausius were accurate. Thus creating a new path for Hamlet to follow.

Later in the soliloquy Shakespeare meddles with his use of words and allows the readers and audience to come up with their own predictions on what will happen and where Hamlet’s thoughts are leading to. “The spirit that I have seen / May be the devil, and the devil hath power / T' assume a pleasing shape.” (627-629). After looking at the kings face Hamlets will know if his uncle was the murderer or actually innocent for the death of the king. If he is innocent it will mean that the ghost of the king was actually the devil. Hamlet strongly states that The devil knows how to trick people by turning into someone that one loves and misses dearly just like Hamlet does his father. “Yea, and perhaps / Out of my weakness and my melancholy, / As he is very potent with such spirits, / Abuses me to damn me.” (629-632). At this point it comes to the attention of the readers and the audience that Hamlet may be going mad. He starts to doubt he ever saw the ghost of his father and that he mistook the devil for his father. Hamlet however admits that he is weak and depressed and it was his state of instability that lead the devil to take advantage of him.

Hamlet ends his speech with the words “I’ll have grounds / More relative than this. The play’s the thing / Wherein I’ll catch the conscience of the king.” (632-634). The tone of the young prince suggests that play will give him more to work off of. He will have more proof and knowledge on whether to trust Claudius or not. At this point in his life all he cares about is the play. He feels it is crucial that he know more about Claudius’s thoughts.

Throughout this entire speech Shakespeare toys with language as he brings in a new setting to the story. The questions about trust and doubt come up as Hamlet devises his magnificent plan. Shakespeare switches gears to the prince confirming his suspicions instead of going along with fully trusting his ghost father’s words that Claudius killed the King.