Hamlet or The Tradegy of Hamlet: Prince of Denmark is a play written by WIlliam Shakespeare back in the late-1500s. Shakespeare had written many plays and acts while he was alive, but the most famous and well-known one is Hamlet. There are many different parts of the play that are very well known like “To be or not to be” soliloquy by Hamlet. Some cases it can be very hard to understand his writing when first glanced at, in the following paragraphs we will be analyzing one of the soliloquies/monologues in Hamlet.In Shakespeare's plays, he very often uses exaggeration to get his thoughts across through his characters. Also, he likes to show how sophisticated he can by using very elaborate sentences that have to be interpreted. Sentences that have to be searched through, read over and over again to get the full meaning of the passage. These traits of Shakespeare’s writing can be identified in this scene.

The following monologues takes place in Act 1, Scene 3 from lines 65 to 80.  Polonius is talking with his children, Ophelia and Laertes. These few lines are directed to Laertes. Laertes is the oldest and he is going to college. Laertes has a sort of reputation where could people would consider him a ‘manwhore’. Polonius is warned Laertes about what he should do with himself as he goes along on this journey of life.

Give thy thoughts no tongue,

Nor any unproportioned act of his own

Be thou familiar, but by no means vulgar.

Those friends thou hast, and their adoption tried,

Grapple them to thy soul with hoops of steel;”

Polonius is telling his son that he should that he see what he can learn and be from other people. He shouldn’t pay attention to other people and be friendly to other people. Not to be mean to others and hold onto the friends that you find that are trustworthy. Shakespeare is using his knowledge that he found when he was growing up by putting him into Polonius. This is a thing that carries on to the people of today. These lessons and advice can be overheard from a parent to a child of today, sometimes the advice can sound different for what goes on today.

“But do not dull thy palm with entertainment

Of each new-hatch'd, unfledged comrade. Beware

Of entrance to a quarrel, but being in,

Bear't that the opposed may beware of thee.

Give every man thy ear, but few thy voice;”

Polonius continues to tell his son Laertes about don’t waste your time with every new guy that meets your path, but also don’t start fights. He says that if you do get into a fight that you should stand you ground and finish the fight. Then, he says listen to many different people but only give your voice to a few people. This advice can be really helpful to Laertes because since he is considered a ‘manwhore’, a lot of different people could try to pick fights with him. Polonius could also be saying this to Laertes because at this time his daughter Ophelia is with a person that Polonius doesn’t trust entirely. The person that Ophelia is with is known as Hamlet, the star of the play. Polonius doesn’t believe that Hamlet actually loves Ophelia, he thinks that Hamlet is just playing her for a fool. Polonius wants Ophelia to stop seeing Hamlet. Polonius is trying to avoid Laertes from getting into the same situation as Ophelia.

“Take each man's censure, but reserve thy judgment.

Costly thy habit as thy purse can buy,

But not express'd in fancy; rich, not gaudy;

For the apparel oft proclaims the man,

And they in France of the best rank and station

Are of a most select and generous chief in that.”

The last part of some of the dialogue from Polonius can be translated to listen to everyone’s opinion but hold back your judgmental thoughts. Spend as much money as you have on clothing, but make sure they aren’t clothing that are to showy or gaudy because clothes make the man. France is basically the capital of where people are judged on their clothing and where they find a person is made by the clothes that they wear.

In the end, Shakespeare had taken a regular conversation that happens in most families. This advice can be given to a daughter or a son when they are going anywhere way from home. The children could be going to college or just moving away. Shakespeare used his very kind and intelligent words to communicate a very simple idea in an elegant way, a thing that Shakespeare is known very well for. 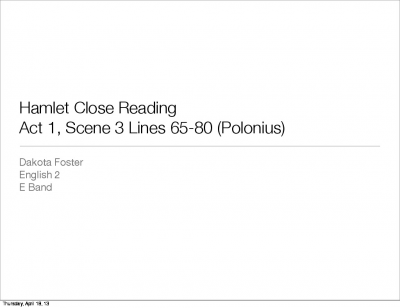