One of the scene from the book to connect is when one of the character name Laertes talks to his sister Ophelia about her boyfriend Hamlet. He wanted to let her know about the type of person Hamlet was and he wanted her to be careful with him. A quote from it is “For Hamlet and the trifling of his favor, Hold it a fashion and a toy in blood, A violet in the youth of primary nature, Forward, not permanent, sweet, not lasting, The perfume and suppliance of a minute. No more.” This scene is from Act 1 Scene 3 Line 9-11.  To translate exactly what Laertes was telling his sister was “For Hamlet and his attentions to you, just consider it a big flirtation, the temporary phase of a hot-blooded youth. It won’t last. It’s sweet, but his affection will fade after a minute. Not a second more.” So the whole point of this line was just a heads up for his sister Ophelia. He didn’t want his sister to be hurt or make wrong descions and soon would be hurt at the end.

Shakespeare written most of his plays in an old fashion english. So it is more difficult for people in the modern days to read and understand what the play mean, and or what the character is trying to say. For example in the play Hamlet the entire play is written in old english and when we read it we would have to analyze what the character are saying, an example to prove is from one of the scene in Act 1 Scene 3 Line 15-19 when Laertes tells his sister Ophelia “Think it no more. For nature, crescent, does not grow alone In thews and bulk, but, as this temple waxes, The inward service of the mind and soul Grows wide withal. Perhaps he loves you now, And now no soil nor cautel doth besmirch The virtue of his will, but you must fear.” What this quote is saying  is Laertes is telling his sister Ophelia to think bigger. The translation is “Try to think of it like that, anyway. When a youth grows into a man, he doesn’t just get bigger in his body—his responsibilities grow too. He may love you now, and may have only the best intentions, but you have to be on your guard.” So basically what Laertes is telling his sister is to beware of Hamlet. For her to watch what she does and for her to have her guard up with him.

Another part to the line that connects to the scene is when Laertes tells his sister Hamlet back round. Like how he came from a royal family, what he already had plan for him self in the future. For example in Act 1 Scene 3 Line 20-28 “His greatness weighed, his will is not his own, For he himself is subject to his birth. He may not, as unvalued persons do, Carve for himself, for on his choice depends The safety and health of this whole state. And therefore must his choice be circumscribed Unto the voice and yielding of that body Whereof he is the head. Then if he says he loves you,” What this quote discribe is Laertes telling Ophelia where Hamlet came from like his life back round. For example Hamlet came from a rich family, and his attention for her may not be as important then what he has to do with his family. And to make the people that support him happy. So to turn the quote into a modern version Laertes tells Ophelia this  “Remember that he belongs to the royal family, and his intentions don’t matter that much—he’s a slave to his family obligations. He can’t simply make personal choices for himself the way common people can, since the whole country depends on what he does. His choice has to agree with what the nation wants.” So this explain what Laertes was telling his sister.


In Shakespeare his writing are really great. This is because i believe when he writes his plays he makes it very interesting. I believe he wants people to see his plays as something exciting, something for someone to think about. Like for example how his old fashion english makes us think about what he is trying to say because now its modern english. in his play writes it shows a lot of details and emotion so that people who don’t understand ca understand by watching. Shakespeare is one of the great play write, that has pass on from years into todays worlds where we analyze his plays and also act it out our selves. 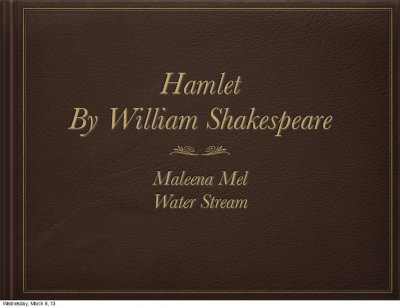