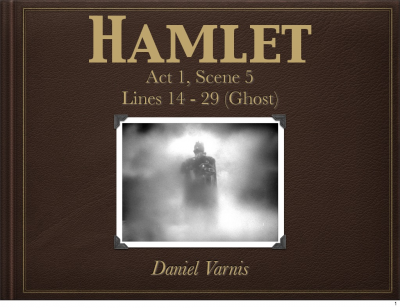 Hamlet, or The Tragedy of Hamlet: Prince of Denmark is a play written by William Shakespeare back in the later-1500s.  Out of all of the plays and acts that were written and directed by William Shakespeare, Hamlet has been one of Shakespeare’s best and most highly acclaimed play he ever created. Also, other than it being his most highly acclaimed play, it’s also his lengthiest player ever written. Hamlet came in with a total word count of 29,551, covering an extensively long amount of 4,402 lines. Further on, we will go into and present the scene that is to be analyzed.

The following scene takes place in Act 1, Scene 5 on lines 14 through 29, the position being played is the Ghost of Hamlet’s father, Claudius:

I am thy father’s spirit,
Doomed for a certain term to walk the night
And for the day confined to fast in fires
Till the foul crimes done in my days of nature
Are burnt and purged away but that I am forbid
To tell the secrets of my prison house,
I could a tale unfold whose lightest word
Would hallow up thy soul, freeze thy young blood,
Make the two eyes, like stars, start from their spheres
thy knotted and combinéd locks to part
And each particular hair to stand an end,
Like quills upon the fearful porpentine.
But this eternal blazon must not be
To ears of flesh and blood. List, list, O list!
If though didst ever thy dear father love–

Starting off from the beginning of this scene, this is when the ghost comes out to Hamlet, proposing the fact that he is the ghost of Hamlet’s father, who was killed by Claudius. Pause, let’s take a few steps... well, a few scene-steps back. Back in Act 1 Scene 1, in the beginning of Hamlet, the two watchmen Bernardo and Marcellus are watching over the castle as they begin to realize that a strange apparition was appearing in the darkness. They almost immediately thought that the ghost was the ghost of dead King Hamlet. After noticing that shakespeare inputted those various appearance of the ghost into the play, a few questions came rolling through my head. First a foremost, I pondered why Shakespeare thought it was necessary to make the ghost come into play a few times before even encountering itself to Hamlet. Personally, I thought this was Shakespeare’s monotonic and indirect way of hinting to the readers that the ghost was certainly Hamlet’s father. Using this method of writing, Shakespeare was able to successfully capture the readers attention, throw the reader off, while also hinting towards the reader what could possibly happen, such as Hamlet eventually coming around to confront the ghost.

Continuing onto this line from the soliloquy:

“Till the foul crimes done in my days of nature

Are burnt and purged away...”

These lines are somewhat towards the beginning of the soliloquy. At this point, Hamlet’s father’s ghost is explaining that he wants everything that caused his dead to be gone from the face of the earth. William Shakespeare added this part because it’s there to explain the father’s infuriation from being dead and no longer having the ability to roam the Earth a free human being.

“I could a tale unfold whose lightest word

Would hallow up thy soul, freeze thy young blood,

Make the two eyes, like stars, start from their spheres...–”

From here, the ghost is explaining that there are things on the dead side of the world that are not meant to be seen. From here, Hamlet is very curious to hear what is father has to say about being dead, but the ghost begins to explain that if he did begin to extrapolate the truth, Hamlet may not be able to bare listening to the rest, considering how frightening and inhumane it is.

All of that could also be connected with...
“–...Thy knotted and combinéd locks to part

And each particular hair to stand an end,

These lines are just a continuation from what the ghost was just explaining, how the dead world is too exhilarating to listen to.

In conclusion, this main quote from Act 1, Scene 5 mainly summarizes the debut of Hamlet and his fathers reconnection as Shakespeare includes various types of tone and “secret messages” that depict the possibilities of different reasons why the ghosts various appearances occurred early on in the play.