There are more than 500,000 homeless people living in America today. About two thirds of those are living in homeless shelters. What you may not know about these shelters is that they could be even worse for their inhabitants than the outdoors. To hear the testimonies of many people who formerly resided in these shelters is jarring. Many tell stories of how they had been raped, had their belongings stolen, were forced to sleep in the cold with no blankets, and more.

As a citizen of Philadelphia, I see and interact with the homeless on an almost daily basis. While they need money and shelter, sometimes you run into someone who just wants a hello, or to listen to some music. I think that many find it easy to forget that the homeless are people, and when they’re not being ignored and exposed to the harsh outdoors, they go to homeless shelters which can be shockingly even more dangerous. The evidence is everywhere. After only ten minutes of sifting through Google reviews I found complaint after complaint of theft and neglect by employees and inhumane sleeping conditions. Of course some of these locations have close to no bad reviews but others are almost unbelievable. One location, “Gaudenzia House of Passage”  had multiple reviews saying that the people staying there had to “sleep in a chair in a cold room” for three weeks before being admitted a cot.

As bad as these shelters may seem, things only get worse for minorities. Especially for transgender women.  This can be shown in the pie chart below.

While LGBT identifying people make up about 11% of the total population, estimates of how many homeless people are LGBT range from 20% to upwards of 40%. In an equal society this would not be true. Many queer people are forced out of their own homes because of their sexual or gender identity, most notably trans women and gay men. Let’s talk about race. As seen in the following pie chart, black and African-American people make up the vast majority of the homeless population. Black people only make up 13% of the total American population. That’s a percent increase of over 6 times. 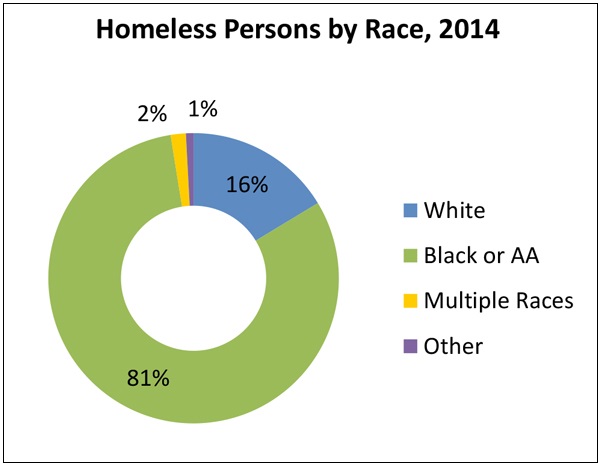 Clearly our problem, as a nation, is not only with the state of homeless shelters or with xenophobia creating poverty inequalities but both; they intersect. To make homeless shelters more hospitable we need to somehow terminate the fact that there are these systematic inequalities and vice versa. From here I would like to personally interview some of the people affected by the homeless shelter system in America and more personally, in Philadelphia. The research I have done so far has been eye-opening to say the least and has only pushed me to continue studying and to try to make a difference in this issue.

I think how your post is like not just talking about the amount of people that are homeless, but actually talking about race and gender too. I like how you included how people act towards people that are homeless. For your original research, I think you can help people that are homeless around, like buying them food or observing how people act towards homeless people and interview them about how they feel about homeless people or their react towards them. I also suggest probably interview someone that is homeless and how they feel about being ignored by people or questions that aren't too personal. Another idea for your original research is contacting an organization and interviewing one of the members or the head of the organization about how they helped homeless people and etc.