The project that will be focused on is the concept of whether Affirmative Action, an act that is committed throughout the United States, should be used in the selection process of higher level education. For those that are unaware of the issue, it’s the process in which people are selected predominantly based on both their race and geographical background, and in many cases the sum of yearly income that enters their household. It’s basically what allows the higher power to choose which of those can live their lifetime goals of achieving the dream college, but putting a huge racial stamp on the envelope. I know that at the ripe old age of fourteen that this has nothing to do with me, but in just a few short years myself as well as my fellow peers may fall victim to this flamboyant secret that is meant to be a figure of imagination that has since grown to national recognition. This matter that is often swept under the rug, should in fact be brought to the light as it does not clearly benefit the masses.

Perhaps one of the most principal problems facing young men and women every year is that of where they will go after they receive their high school education. For many that have made a clear choice to reach for the colleges of their dream thinking that it would be the most ideal place to nurture them through the beginning stages of adulthood, while constructing the foundation of an illustrious career in the making. But it is the broken spirits of those who are more than qualified that can’t draw their bulging eyes from the big REJECTION on the top of their letter simply because their not a poor black child from the mean streets of Compton, or a talented hispanic singer who’s mother worked hard to support multiple kids. What might seem to be ridiculous on paper is true for many all across the country. Something that is absent from many people minds is continuously being brought into the life due to working a modern use of racism. By striving for a look of diversity amongst its students, many campuses are using race to forge an image that does not deal with the quality of education that is being offered. Studies have shown that over the past twenty years, while trying to make a supposedly diverse campus many colleges are accepting more and more black and hispanics while limiting the amount of white and asians. 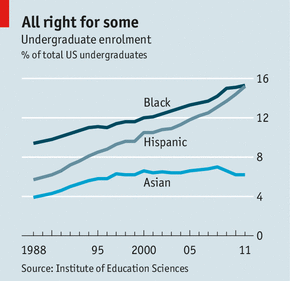 ( This image illustrates the averaged enrollment of African Americans, Hispanics, and Asians in college.)

It is seen that despite your abilities, if your color is not what they want in their crayon boxed your don’t become a member. People have the right to know that their futures are depending on if they’re either black or poor enough. Darker or can be spared more pity. Minority is what can get you to a major. The dangerous part of this is that many who are accepted into these high level institutions are not at all ready for what comes with the acceptance letter. Law school as proven to be a case in which this is evident as African Americans have shown to generally do poorer both in school and on the LSAT exam.

( The image illustrates the performance of African Americans, Whites, Asians, and Hispanics on the LSAT exam, percentage of getting into the law school, and grade point average. )

It should also be noted that African Americans students generally make up the bottom twenty percent of for those in law school. Probably the most shocking is that this idea is being approved by some of the public. A recent study showed that there are those who believe that Blacks and Hispanics deserve a little extra help compared to that of their Asian and Whites peers. Others also believed that they deserve special treatment as a result of inequalities faced in the path. Neither having to deal with whether an applicant is qualified enough. Interesting. For college the work doesn’t matter. 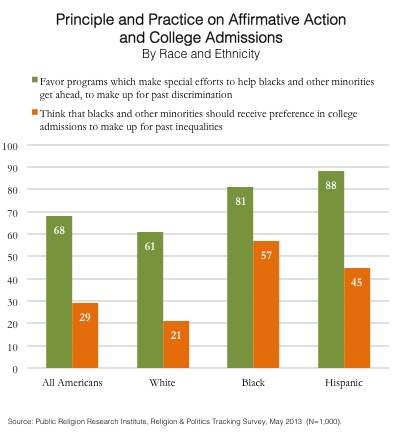 Affirmative Action was used to give African Americans equal opportunities, and in many ways it has, but on the other hand it is setting up many young black students for failure as their futures are being tampered with to make the cover of a brochure more...colorful. If the idea was to make blacks more apart of the grand scheme of things, it has worked but at the expense of many white and asians students who now seem to be thought of as to privileged for college, or not struggling to the capacity of gaining a quality education. I don’t understand why colleges continue to use the idea of affirmative action to only benefit themselves, when the whole point of college is to mold the new generation to be the best that they can be. I also want to know how can something that has severe origin in a dark time in history that was used to help those in need, do almost the same exact thing as those from its original time period but to a different set of people. More importantly why is this still being allowed to happen. As I continue, I want to center more on the individual effects that affirmative action has had on people. Affirmative Action is the secret that both makes and breaks dreams without a logical purpose, and from what I’ve come across is not needed in the modern society.

Great job researching such an important issue! Have you considered interviewing someone who works in Admissions at an educational institution? It'd be interesting to hear their thinking on this.