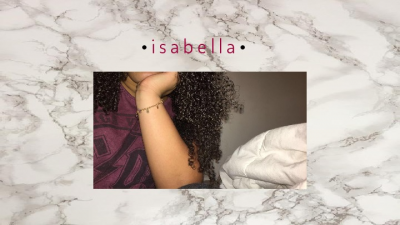 When I first  showed my slide to my group, the really enjoyed it. They liked how it was “tumblr vibes,” which was my goal for the aesthetic of the slide. They liked the layout because it was easy to see and you eyes could move around the page easily. They said the slide was straightforward and flowed well together. They also mentioned there were some minor issues with how it looked. My name “isabella” was black, and the background was black and white marble, so it was a little hard to see. They recommended to change the color for it to “pop.” The other small issue was the top picture. They said it didn’t exactly go with the other picture, so I got rid of it as a whole.

I then centered my now colored name in the center and I put the bottom picture directly under it. I read somewhere that if there are similar colors or the same color in a picture, there would be some type of cohesion all around. I knew I needed to change the color of my name to make it pop and I changed it to the color of my shirt in the picture I kept. I centered my name so your eye would easily see the point of the slide and the photo under it was centered also.

Other research I read was that open space isn’t a bad thing. I didn’t fill up the whole slide because it could get distracting and annoying looking at all the different things. I kept it simple and easy to see. I also based my design off of the ikea sign article. They said to hang a big picture or image of something and very little words. I did just that. I followed these articles because I wanted my slide to be simple and easy to understand. I personally think I did a good job on this project and I learned a lot from what I read.