Over the last few months, I have learned a lot about homelessness. Yet it’s still hard to say whether  I am satisfied or not with what I have accomplished. Sure I am proud of all the knowledge I have picked up on the road of knowing more about the situation of the homeless, but for my agent of change I couldn’t really accomplish what I had envisioned. It’s not over yet though because this was my first shot of taking action to better make the situation for the homeless. Only because the project ends here doesn’t mean I will stop trying to make a change. I have grown not only in knowledge but as a person as well. I remember back in my first slate blog post mostly focused on the misconceptions about homeless people. How they are seen as lazy, drug addicts, and people who take advantage of their situation. I focused only on how they were viewed, treated, and reasons why they were in the situation they were in. In my second blog post I worked on researching more about the truth of why people go homeless, why homeless people don’t go to shelters, and with this information I was able to come up with my own definition of what being homeless truly is. For this blog post I focused more on what has been done or is currently being done to end homelessness and what I did to make a change about the homeless situation.

I am not the only one who wants to make change for the homeless people. Other groups of people have been working on better making the situation so that the situation of being homeless can end. In 2004, a group of homeless advocates in San Francisco tried to test out something that could possibly help homeless people with most of their needs. They rented a local convention hall and made social services provide tables and they would have shoes, clothes, free food, medical treatment of any kind (including mental illnesses), information about short and long term housing programs in the city, free phone calls, etc. for the homeless people. This program also made homeless people feel safe because the people volunteering would protect their belongings. This act helped homeless people have an opportunity to change their life because they now have the most important things they need and with the short and long housing info, you should be able to come to an agreement to a housing fund with the government. These events bring people from the community in because a lot of people donate clothes they don’t need and donate money.

In my opinion I think this is a great way to make change but 25% of the homeless population have severe mental illnesses and because of this it is hard to get these people to join these organizations because they need help to navigate around to find them. Also 40% of the homeless population have disabilities and because of this, it will almost be impossible to get these events because they wouldn’t be able to get there because of how far the location is. Or because they aren’t able to move and need assistance to get there. There is also a system that helps prevent homelessness. This is the Federal Housing Assistance, this helps low-income families but having the government support them by renting them a home until they are able to once again take care of themselves and their families. Thanks to this, family homelessness is decreasing. My opinion on these ways of change is that this is great because not letting families being homeless makes the situation better for everyone. The reason is because if the children grow up to be homeless, then the homeless population will increase and we don’t know if they have a mental illness. Another solution that I read about was increasing the welfare rates because in 2004 the rent for an apartment was $678 per month and back in 1991 it was just $325 a month. Welfare still pays $510 even if the apartment rent increased. Before, you would use $325 a month for rent, $185 for other necessities. If rent cost more than what welfare is giving you, then you obviously can’t keep up with everything and what happens is that you get evicted out your house or apartment. In  my opinion an increase in welfare will definitely have a huge impact on keeping people stabilized and will keep people from living in the streets.

For my agent of change I had trouble trying to do what I had envisioned. At first I had planned to volunteer at a shelter. I was positive that the shelter would email me back because I had an interview with them but they didn’t. After I realized that wasn’t going to happen I planned on contacting my uncle so that he could give out food he doesn’t use to a homeless shelter. It turns out my uncle was already giving his leftover food to shelter named New Visions Homeless day shelter. So at the end I decided to give back to the people that needed help. I gave food and money. Other people joined me when I told them about what I wanted to prove and they came to realize that it’s not fair to judge someone when you don’t know their story.

I decided to go on with this because since I ran out of options, helping the people who need it would be the best choice for me at this point, also I wanted to inform others of the truth behind the homeless. When I was helping people and saw my friends helping people I had this feeling of happiness that filled my heart. I felt like there was hope in making people’s eyes open and see reality.  I was effective in making a change because I informed others more about the truth of homeless people and I helped homeless people in the streets by giving them food money and telling them that they shouldn’t feel bad because good things will head their way if they do good things for others. I gave them positive vibes and made them feel better and that they are humans and that they don’t need to feel lower than anyone else because they are just as good as anyone else.

I don’t plan to stop here, I want to use this as a step closer to make a bigger impact. My goal is to create an event where there will be food and I will use the money raise to give to a homeless shelter so that they can help get medical care and other important necessities. The project changed the perspective of my life. It taught me to value my life more because I have what others don’t have and it proves that life could change in a matter of seconds. The people I met in my journey to find the truth behind homeless people taught me that family is the reason they were able to bring themselves back and that family and friends are the answer to end homelessness. It taught me stuff about myself that i didn’t think I had. I would always think I would be a tough guy and that I didn’t really have a soft spot. This wasn’t the case when I learned about people stories and how their relationships with family changed. Most of the stories I learned about either talked about how their family left them or how their mothers were their inspirations to bring themselves back up. I feel like I could have found a better way to get my message across about getting to know someone before you judge them. This is only a step closer to change because it won’t end until we take action. We the people need to help others by creating fundraisers to create a shelter where everyone is welcome and it would help rehabilitate those with mental illnesses. We are the start of change. 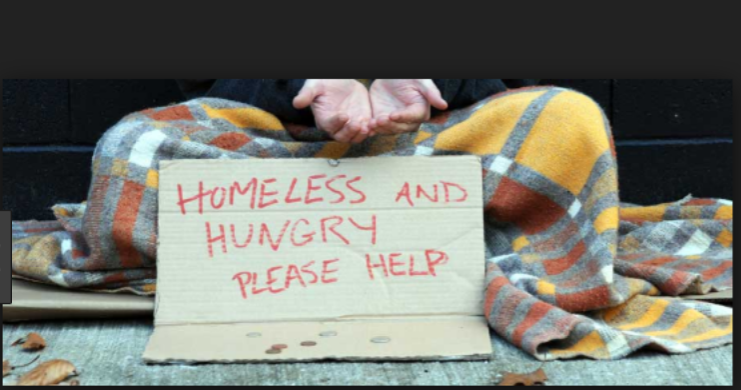