Posted by Jordan Meriwether in Technology- Freshmen - Hull on Sunday, December 9, 2012 at 5:54 pm

In technology class we discussed how to make efficient slides on PowerPoint that do not have much on them, but say a lot. The idea for this script is for me to be able to be able to explain a slide that is about myself without getting choked up.

This slide (believe it or not) was inspired by a IKEA sign, since like most they make a point by saying little to nothing. My slide can be considered “glance media”, since in only one quick glance you would get all the information you need to understand it (I am a fencer and I am the best you will ever know). “Bleeding” is when you take a photo and cut part of it out of the frame, this would not work for this in my opinion since you need to see the full picture to know I am fencing. You may also have noticed that the first thing you looked at was was ‘You Will Ever Know’ on my slide since it makes you have to look back and read the rest.

The picture I chose was not random, it is the perfect picture to get the point across about who is the best. The photo was a action shot which causes the viewer to train his eyes on to it, also it bring forth excitement. The slide portrays a bright photo which draws the attention of the readers right after they have read the statement. The only flaw is it holds no emotions, just me fencing, but other than that I is a superb slide. 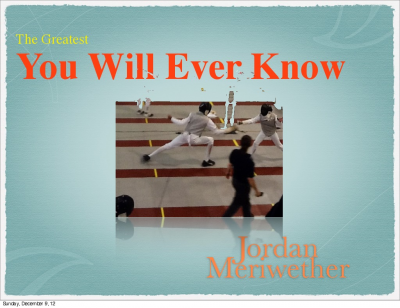