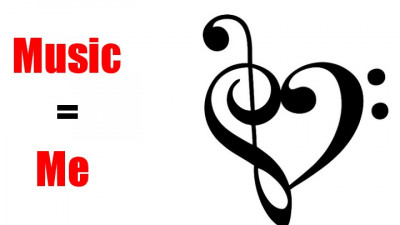 In my slide, I portrayed how music is a representation of myself.  I made the slide look this way because it is a simple and minimalistic, yet effective way of catching someone’s attention.  The elements of design were what influenced my decision making when creating this slide.  There are multiple elements of design I used in this slide.  These include contrast, bleeding, the rule of thirds, and empty space.

I used contrast in my slide by adding a pop of color, as opposed to just seeing black and white in the slide.  The “music” and “me” being red and the “equals sign” having a black font color indicates that music and me are the same.  For bleeding, I made my image slightly go off of the slide, to give the effect that there is still more to see of it.  I used the rule of thirds by making “music” go in the first third, and the equals sign divided it with “me,” which is in the second third.  Finally, I used empty space by using a “minimalistic” style, which I did my own research on.  Empty space looks more professional compared to slides with too many visuals going on. 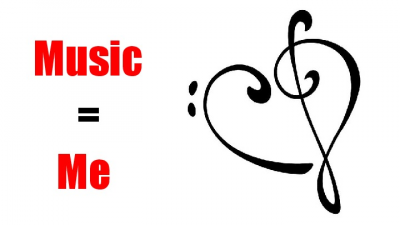 I learned a couple of different ways that I could change my media fluency slide after receiving constructive criticism from my classmates. First, I found a new image, because my previous image pixelated when it was projected. Also, I got rid of my attempt of bleeding the image off of the page, because it was more of an eyesore than the proper way of bleeding the image, which would be actually taking the whole image and placing it so that a whole side of it is bleeding off of the slide. The last thing I changed was moving my quote more towards the image. Ms. Hull set us all up for failure. She did this by not exactly telling us how we had to set up our slide. She gave us some resources, but otherwise it was all up to us. I'm very content with the final product of my work, and I feel that I learned a lot about how to properly design a slide.

I notice that you fixed the way you set up the heart made of music symbols. It looks really good.