Run down buildings in a once what was popular shopping district is now almost destitute-like.

For a country (or kingdom as it was previously called), that was once flourished with royalty and riches has now fallen to one of the most poorest countries in the world. Coming from a family who almost entirely immigrated from Cambodia, the country holds a special place in my heart and it was painful for me to see millions of people living under harsh conditions. This past summer, I myself visited the country for the 4th time in my life, and it was like day and night between America and Cambodia. My family members who live in Cambodia mostly classifies as middle class and I lived with them during my sojourn there. We often traveled and visited family members who were living in poverty in order to support them and give them some basic necessities. One day you’re in the middle of a rich and wealthy neighborhood, and the next you’re struggling to find a running faucet or toilet. It was an experience that I cannot describe having to witness firsthand of people without the normal amenities such as water or food. Some signs were scattered alongside an unmarked path which roughly translates to “DANGER: Landmines ahead. Use extreme caution.” I’ve read about thousands of landmines that are still armed from decades ago, so this did not surprise me at all.  As a child before, I didn’t really understand that much and paid no attention to what people’s social status because you know, children only see vacations as having fun! Now as a 15 year old, (14 at the time of the visit), it breaks my heart to see people live like this. My parents also told me that they had to live like this when they were little and lived in Cambodia. It just all felt surreal and hit a little too close to home. 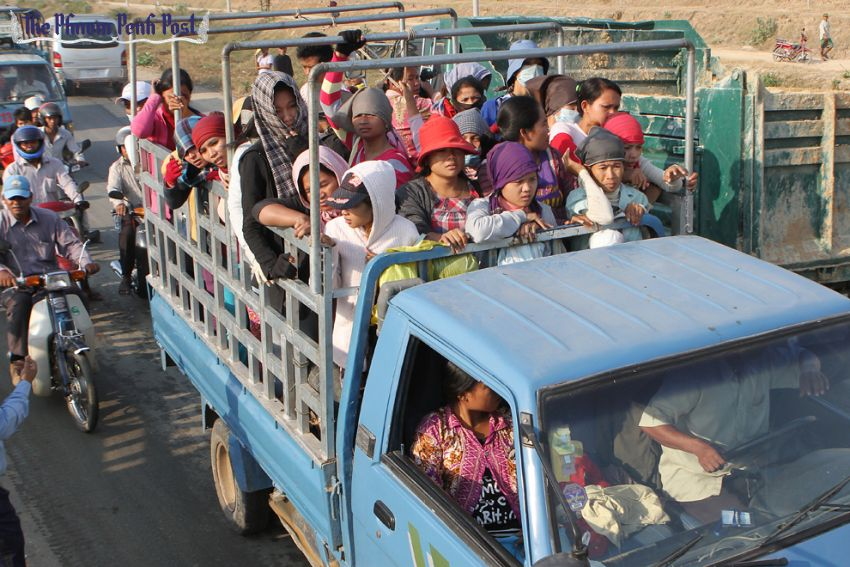 Daily, people wait alongside on the road in order to busses or pickup trucks to pick them up for work in a factory. Dozens of these trucks can be on the road at one time, and up to 50 people can be squeezed in on each one, often crowded.

Poverty in America is nothing compared to what poverty in Cambodia is like. Over 70% of the population is classified as “poor” or “near poor”. The situation is so dire that in fact if those people who are classified as “poor” or “near poor” just lost 30 cents from their daily income, then they would fall into extreme poverty. Education quality is one of the biggest reasons to why poverty exists in Cambodia. Even though private schools become more and more affordable, public schools just cannot keep up. In 2014 75% of Cambodia’s high schoolers failed their graduation exam due to inadequate teaching and funding. Another major factor was history of the country itself. It experienced a bloody massacre which killed most highly educated scholars and farmers. Once it ended, the country was left to rebuild but the only people remaining were either children or small-scale farmers. Today, the country relies on textile manufacturing and tourism as its main source of income,but even so, this is not enough to revive the economy on its own as these are two very weak compared to things such as fishing, technology manufacturing and the car industries that are present in big countries such as Australia, Japan and the United States.. There is also a source of income from foreign relief as in 2015, the country received a total of $677 million dollars from foreign aid. Compared to other Asian countries such as Japan, South Korea, Taiwan, and Singapore, Cambodia does not farewell in terms of employment and the economy itself. Let’s take a look at a poverty map for Cambodia. 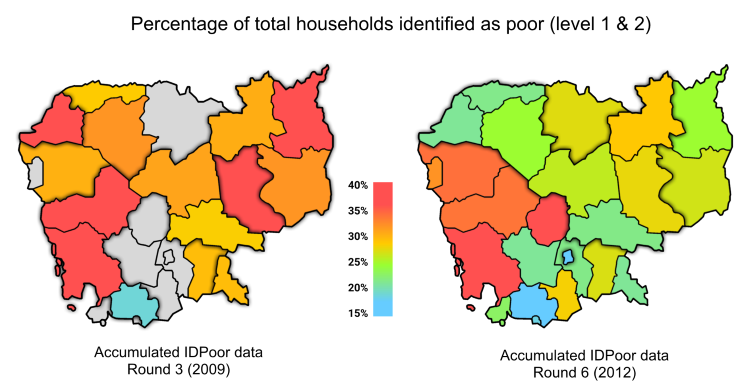 Now let’s take a look at a comparison bar graph. 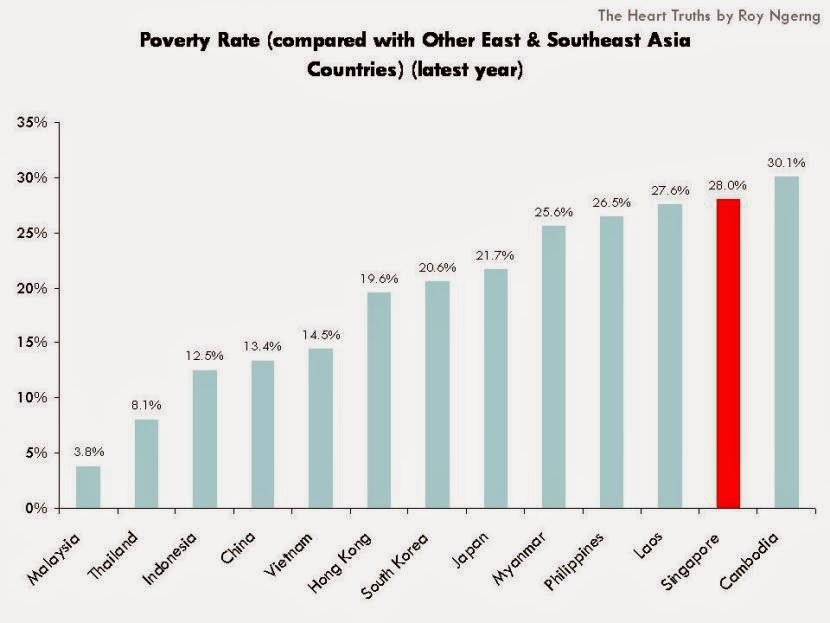 Cambodia has the highest poverty rate at 30% with Singapore and Laos coming in 2nd and 3rd respectively. The lowest is Malaysia with just 3.8% of the population being in poverty.

Finally, let’s take a look at where Cambodia stands in education ratings. 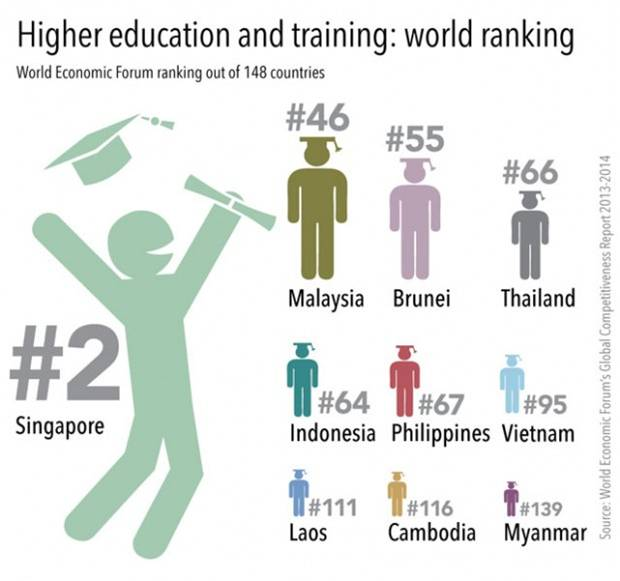 Like I said before, education plays a big part in why Cambodia has a lot of poverty. As we can see, Cambodia is ranked 116 out of 146, which is lower than average.  Compared to other SE Asia countries such as Thailand and Vietnam, they just do not fare well with them.

Every day that passes by, that could be tens, hundreds, even thousands of people suffering from the effects of poverty. A staggering 37 percent of all children under the age of 5 suffer from some form of malnutrition. The main question we are looking for here is: Can we save Cambodia from poverty? The answer is yes and no. We can support from relief aids and taking down corruption, but we are only so limited in our power to end poverty in Cambodia. That is up to the government and its people to change themselves. No one deserves to live like this. The government has turned a blind eye to its people, and that is a dangerous place to live in. Extirpating the cause of the problem will help, but won’t solve it completely. 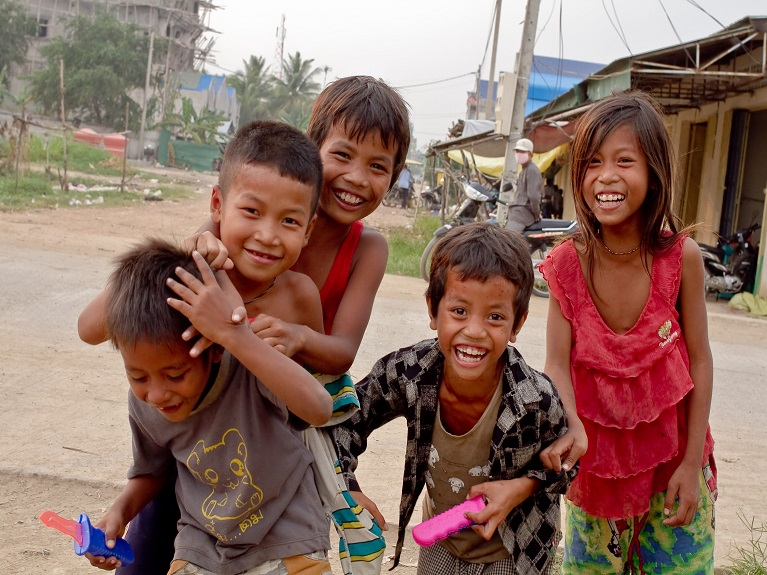 Even in their dark situations, Khmer children always finds a way to smile. One reason I can think of this is because maybe they were taught that everything will be fine or to just be happy. Either way, you can’t just help but smile looking at them.

Ever since I embarked on to that trip, it opened my eyes wider than before and burned the issue into my mind from then to now. It will always be a shadow in my vision until the day that it’s fixed. I plan to be a helping hand in the issue. For me, this IS my community. My international community of Cambodia. Educating others about this issue is something that I hope to accomplish by writing this, and I believe they will have a change in their way of thinking towards Cambodia after this. I am confident that the moment you finish reading this, you are going to do a Google search of Cambodia and learn about its history, photos, and the amazing landscape that it has to offer. Please, help save Kampuchea ( កម្ពុជា)!

What conflict are the landmines from? Why does Singapore have such a high poverty rate, but also such a high education? I feel this may disprove your point that education plays a major role. For your agent of change, you could find a way to raise money and send it to your family in Cambodia to find ways to give it to those in need.