During this project, we researched the happenings and government’s response to the Tennessee Coal Ash Spill. What went well in our group’s project was our ability to work together with one another despite some group members being absent, our ability to convey the understanding of the project in one simple sheet and in terms that were relatively easy to understand and were relatable.

While we wanted to have some more graphic-oriented information about the spill, we did not want to copy the New York Times’ infographic about the spill. As a result, the scientific explanations were explained in words rather than visually.

In the future, I would be sure that the project had more concrete data that could be visually represented on the chart. For example, a better way of explaining the amount of sludge could have been to list dots for a certain amount of sludge, followed by boxing some areas with the respective sizes of buildings.

Overall, I feel as though our group did well in the areas of being concise, transparent, accurate, attractive, gracious, and creative. The areas that could’ve been improved include being visual, different, and varied. These were the harder tips to incorporate due to the fact that very little numerical data (for the effects of the spill) were able to be found. In addition, since our team did not have access to many graphics-making software (such as OmniGraffle), we were not able to produce a graphic that was as visually appealing as we had originally planned. 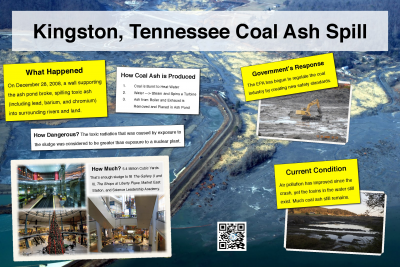