Posted by Daniel Varnis in English 2 - Block on Thursday, January 5, 2012 at 8:06 pm
Daniel Varnis​
Introduction:
For my Language Autobiography, I focused on the main idea of minorities. I talk about how people talk their own unique individual language. Of course there are going to be many different people with the same language due to the limited amount. Anyway, Language is the way of people expressing their selves and communicating with one another. From my point of view I lived in an area were people mainly spoken English. It would be very rare for people to speak a language other than English in my community. Until my life progressed and minorities began to come in, the languages spoken around me became more and more diverse. It was something that was not easy adjusting to, and it was something that I didn't see as a norm.

Language Autobiography:
In life and society in the past, present, and possibly the future racism, inequality and, segregation have been some of the main standing grounds of life. In my life I was born in a typical South Philadelphia neighborhood where 99% of my neighbors and everyone else spoke American English. But as time went on a culture diffusion has progressed, my life as it is have been filled with minorities. And this took much time getting accustomed to. I knew that there was no negating this movement, and it is something that cannot be undone.

Therefore, not only in my life have I felt that a part of my past has been replaced with something new. In my English class I read a passage called, “Hunger for Memory” from a book called, “Aria” by Richard Rodriguez. In this story, there a man who moves from his homeland into a completely different society. From his homeland everyone spoke Spanish, but to where he moved to, everyone spoke English. In the story he was called a “gringo” on page 13. That word is a slang word used in Spanish to show a foreigner that speaks English and comes into a Spanish speaking community. Also on page 13 someone says to him, “You are home now; come closer; inside with us.” Basically they were telling him that he was in an English speaking community and now he lives in a Spanish speaking community; there is no turning back and you have to stay accustomed to what you are coming into. Richard was starting to get hungry for his memory of his old living situation.

Now that the person and I in this story seem to be floating on the same boat, our problems are similar but no exactly the same. In his story, he has the problem of moving to a new area and not being accustomed to the people speaking English all around him. With my situation I accustomed to everyone speaking English around me until people started coming in speaking a completely different language.

Next, it seems like my situation and the person in the books situation seem to tie in together in a very unique way. My problem is too many outsiders coming in and changing my society. Well those people coming seem like one of the many people that are in the same situation as the person in “Hunger for Memory.” So as the people that are like the person that was in the story start to move into a English speaking society, people like me who are already here are not used to these adjustments.

Here is an example of how my family and I used to talk before we felt like society has changed,

“It all began in summer of 2006, my family and I decided to take a vacation to Wildwood, NJ for a week. In the past I was remembered as the jumpy, nonstop, overexcited child. No matter what I couldn’t sit still, and with the information that we are going to the beach, I was running around like a headless chicken. As we arrive in front of our shore house I open the door, run up the steps and wait at the door. Unfortunately I had to help my parents unload the trunk. So as we are done unloading the trunk I run around the house to call dibs on what room my mother and I are staying in. After about 30 seconds of running around we chose the room with the futon and the deck. When my mother and I are done unpacking my family and us two took a walk to the beach. When we get there I rip off the shirt like the hulk and sprint to the water. It felt so good I was running around in circles jumping in the water. From the distance I hear my family yelling at me to back up and not go to deep.

My grandfather yells, ‘Yo wippersnapper, get your ass back here before I beat it!’

When he said that I knew he meant business. I turn around without any other thoughts. When I come up to them he tells me, “Daniel you need to calm down and don’t go too deep. You forgot to put on sun block and you were too far away too fast. The rest of the day I tried to stay my calmest and not give my parents any difficulties. Being a child was a very exhilarating time of my life.” In this example from my childhood, my grandfather said, “Whippersnapper.” That word is something that was said commonly by my grandfather when I was little to emphasize my rowdiness. But as time progressed and society began to change, slowly stopped saying that word. He could have stopped saying it because I was growing up, and I would have found it to be a joke, but I feel like that if said that word today then people would look at him like he was insane.

To close I feel like a piece of my past has been taken away due to the large population of different ethnic groups coming into my life, but it something that cannot be changed and there is no going back. It is something that has to be lived with and something that will take some adjusting too. Maybe I am just under some sort of cultural shock and eventually while I have them around me long enough, I can see my life as, “back to normal.” 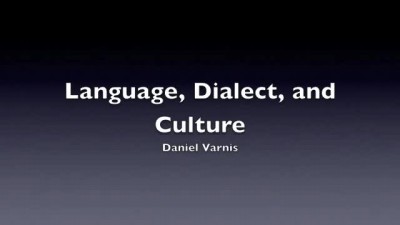