At first I didn’t think the project would be difficult to do. But as soon as I started to get into the paper I realized that it’d be harder then I thought. How was I supposed to write something about language when most people atomically assume that I’ll speak once I open my mouth? This often made me think about how when I’m at home the way I speak, but when planning for interviews I like speaking over the phone first so they can at least give me a chance to impress them without them judging me by my looks or race. But during this project I learned that if your courageous and optimistic then things might not always be the same. In other words, people will start thinking more highly of you, and depend on you more because of it. I was always kind of afraid of what people would think of me because of my race. And most times I would shun the fact of speaking “black”. But now I realized that it’s fine that I can code switch. While when I do talk “black” it isn’t a ghetto way. I’ve realized that no one will ever be able to be his or her selves because the world as one expects too much from one person to be like everyone else.

Language is a funny thing. It either helps you be accepted into a group of friends or a job, while other times it can make people deny your existence or just deny yourself. To me, language is a beautiful thing. And it’s even better when you know a lot of them. Language is like trying to perfect an old family recipe, it takes time, but it’s fun experimenting with the thing you love the most. It’s what defines you for you and not how others would group you into the same stereotype because of the way you look.

There are 6,500 languages being spoken right now as we speak.

What most people don’t know is that language is actually a beautiful song that a lot of people can sing, it’s very heard to learn for people who want to understand other languages. There are years of practice that others have to go through that’s behind the secret of singing the song of language, but not all languages take years. Some languages are just slang that can be picked up anywhere in any continent, in any state, and in any language when you’re around a certain type of dialogue for a long period of time.

When your around a language for a long time, you eventually start speaking and sounding the same way as the people you were around. In my situation, my language is slang. I don’t always speak slang, but I do understand it. As my brother likes to say, “All coons should know how to translate Ebonics.” When needed I can be as proper as the world wants me to be, but when alone, with friends, or with family I can speak freely as much as I want because I won’t be judged or looked at funny for it.  Either properly or with slang or mixed with a little bit of both. An example of this is when I was in my room trying to sketch out a design on my bed “por Español mañana” (For Spanish Tomorrow).

It was comfortable and I had my laptop right in front of me listening to music. My legs were crossed as if I were a pretzel and that’s when my brother walked in. “Can you help me with my Spanish?” he asked with confidence. I looked at him with a strange lift of my eyebrow.

“But you’re in Spanish 2 just like me. Why do you need my help?” I stated.
He protested me with jokes and small talk more and more until he finally got a “yes” out of me. He explained what his task was for the Spanish project he had to do where he stood in front of the side of my bed.

He began to ask me how I would say simple sentences in Spanish. I started to slowly tell him because I was new at it too but he quickly cut me off saying, “Look dawg, and just type it into Google so I can just get this over with.” I grew angry.

I thought “why would you ask me for help if you were only going to cheat?” Why even bother explaining things to me?  I sat there quietly while he typed his directions into Google translate and mumbled from time to time, “Oh, I should have knew that” or “I’d learned that already.” He began to try to start small talk and I just kept answering him with a couple of, “I don’t know” and “The translator is right there”.

My brother began to stopped smiling and eventually stopped trying to make attempts to cheer me up with the method he was using. He looked up at me from re-writing the Spanish translation onto his notebook and said, “Why you always gotta do me like this? You drawlin cuz, all I asked was to help me and you want to make it all complicated. You’re a kill joy yo.” I stared at him for a minute before I said, “I tried to help you and you denied my help. You went to a translator when I warned you it wasn’t going to come out right. So when you fail, don’t blame it on me.”

He finished taking his cheated notes and left angrily because he knew he was wrong and because I was angry with him. After a little while I heard my mom scream, “YO! Done or raw.” And I quickly got up quickly and told my angry brother that it was time to eat. He then seemed to have settled down because he was using my Spanish dictionary and playing NFL on Xbox 360 sitting in his big spiney chair that has 2 arms and feels like fluffy clouds. I waited until he turned around and told him again. He looked at me with calm eyes and said: “okay.”

During this time in life, “YO”, “DAWG”, and other phrases that could be seen as a “code”, was mostly understood by Black people. I’ve notice that as a black culture there is always a new word or an update on a previous slang going around. “Bye Qurl” means in today’s world “End of discussion” or a more known word “Period”, after something important has just been stated. These words are a special connection between blacks since we don’t really have our own language. It represent us. But Blacks don’t have their own language because we were forced to speak, some what “Standard English” during slavery time because Whites wanted to understand what Blacks were saying.

Even though others don’t understand Blacks all the time, we can instantly switch from “hood” talk to proper English when we need to. But because most people stereotype Blacks as “Ghetto” it’s a little hard to be taken seriously by some people. Not all black people are rude,  ghetto, or can’t speak “correctly”. And if there are, then maybe they just can’t receive the same education as other races can. There are a whole bunch of blacks that can speak well and speak in “our” code without a second thought and can still be a business man, a writer, or even an artist. Just because Blacks pronounce or use a different word to describe something doesn’t mean they’re not “well educated”. Blacks are perceived of this because Black slang is not the easiest thing to catch onto or understand quickly.

Also, a lot of people who speak “hard” Black slang are usually from the projects and those people are usually uneducated as well. But it doesn’t go that way all the time. You can be from the projects and still become something better and more. So because of this, it’s hard for other races to understand Black slang terms that a majority of Blacks do speak because it’s shorter and easier for Blacks. It matters for Blacks more because there is still some racism going on, and because of that Blacks are getting shot down jobs and being accused of other things because of their accents, or the way they speak.

And because of that, a majority of Blacks are stereotyped of speaking the exact way.

For example, my brother has amazing writing skills, though if you’re talking to him and your a close friend it wouldn’t seem like he would know great grammar. However, he gets A’s in English all the time and recently received an amazing score on his PSAT’s in writing. This shows you that we as black people speak a certain way to describe how we feel or to describe ourselves in our a chill, comfortable way. It’s apart of us. But because of the stereotypes most blacks just threw away the whole “code” to begin with to fit in. In a short story called, “Tongue Tied” by Maxine Hong Kingston her mother cut her daughter’s frenum which is under her tongue so she would be able to speak any language. At first, she was afraid to speak in class because no one else had their tongue like that from her family and she thought others would view her differently. But later on in the story, she learns to build her confidence and starts to talk in class more because she realized that even her sister was afraid to talk and she didn’t even have hers cut.

It has come to a point that more and more blacks have been acting ghetto, which I dislike to the fullest extent. Trying to show how rude or disrespectful they can be by following the stereotype gives other races reasons to think that a lot of Blacks aren’t educated. Even I have stopped using a lot Black slang. But, I can still fully understand new terms and black dialogue. I guess you can say I’m taking a break from the “Black Code” and learning more of a Japanese one. It’s always good to learn something new I suppose after so many years of the same thing. It’s the way of language to absorb, and migrate once you’ve learned everything there is to be learned. 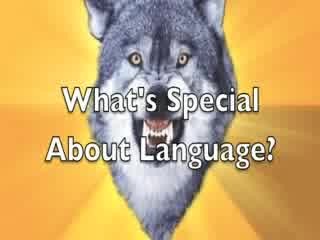