What are you looking at? This is my mindset, my thoughts, my whole life. Evere since I went to school, I became a teacher, translator, and interpreter to my family. This autobiography shows it perfectly because it shows bits of what I grew up into. It shows how I didn't care about translating for my family but I grew into it and now I love every time they call me over to translate.

I have to say that this was the best work I've done this year because it was not only about my life but I got this adrenaline to show people what I am capable of, that I have another life outside of school, and that I know more then you think. I would think that my strong areas are my scenes and how I started my language autobiography. I had fun writing my scenes because I love talking about how I help my family because I am proud of myself and my family. The beginning was easy due to the first benchmark project we did: descriptive essay. I learned to not start of my paper with a cheesy introduction. I started off with a scene and then added it to the introduction below it. I struggled with my reflection because I had so much to say but there are so few words to describe it with. This is a feeling hat I can never describe. That's how amazing it is. I've learned that what I do is not necessarily a common thing and that putting it on paper makes me feel proud and happy of what I can do. Writing this autobiography was a blast.

“Yes. That’s all. Is the card set up and everything?”

“Yes, all you have to do is remove the sticker, sign the back, and… well have a nice day, Mrs. To.”

Turns over to mommy. “Everything is done. Just sign the back and you can use it.

You heard right, the lady on the phone called me, “Hong Tran”, my mom’s name, but that’s no big deal because I am also: Duc To, the Parents/Guardian of Cynthia To, Kevin To, and Tina To, Care takers of my grandparents and my aunt, and lastly the translator for mostly everyone in my family. But like I said, it’s no big deal. I teach pronunciations, new words, translated words, formal words in Cantonese, Di-jew, English, Vietnamese, Hak-ka, and a little bit of Mandarin.

Have you ever seen a fifteen-year-old Chinese/Vietnamese/ Cantonese/Di-jew/Hak-ka to English translator? You probably haven’t. There are a lot of people like me out there but they probably haven’t realized the things I realized. They probably take advantage of how much they actually can help them. I used to hate translating for my family but there’s one thing, the most important thing, I’ve realized. Besides giving my family all of the love I possibly can, I can use my knowledge and languages to help them translate.

Ever since I could talk, I was assigned the role of translator in my family. Every time I go over to my grandparent’s house, I am a Di-jew to Cantonese translator for my grandma and grandpa. I always thought this was a tedious job because of all of the exercise and out-of-breath moments I got. And…well, I was watching TV whenever they needed me and I didn’t want to miss anything; but it’s my grandparents and what they say rules out anything you need and have to do.

“San ma, buh see me? [Respectfully: Grandma, what is it that you need?]” I say as I approach her on the kitchen floor chopping herbs.

“Awh [Okay]” As I run to the basement to where my grandpa is.

“Awh [Okay]” he says as he puts away his tailoring items.

I swiftly make my way back upstairs to the second floor to my TV.

A few years later I was given the honor of another TV interruption and an excuse to be yelled at! I became my family’s credit card/letter/phone call translator. The first couple of times, I was the most formal 8 years old you could talk too. Now, as seen in the beginning I’ve lost some of my formal touch because of the aging and because I’ve heard the same thing over and over again. Its starts with the last four digits of the social security number, then back of the credit card, then an annoying questionnaire from a person in another state a bazillion miles away, then the end of the phone call, hopefully. If not, then there are more advertisements from protecting your card to the wondrous terms and conditions.

As I got older, my parents thought of me as their Vietnamese/Cantonese/Di-jew dictionary. They would give me one word and then spell it of told them what it meant. I thought this was the reason for why I thought I knew almost everything. But it’s not because I’m still learning every day. Nevertheless if my parents can’t say the easiest words right, they go to me or I’ll just correct them. One word…well letter is “H”. That darned letter has made people have giggly faces as my parents tried to spell words with the cursed letter. It’s not only the letter “H”, it’s words that they’ve only heard and never used without running it through to me. My dad brought up a good point. A point so good that it kept me thinking for a while where all of the other weird words my family says like: hay-ch for the letter h, im-pol-lie for impolite, gar-rahe for garage and so much more. I’ve grown into these words thinking they were real and usable but they weren’t. They were only to the “fresh off the boat” people because that’s the slang they spoke. I remember then one time in the car when I was singing to my sister while we were getting gas and this is what happen…our belly busting laughs as a family…
“Yellow diamonds in the light, now we’re standing side by sideeeeeee, as your shadow crosses mines, what it takes to come a aliveeee-uhh-iveeeeee-ee” And right when I was trying to start the second verse, my dad says to the gas station guy as he handing us the receipt and credit card: “Thank you, I a-per-shit-tated it.”
In that moment, the whole car sent out laughs of every one but my dad. He didn’t get it. He just sat there with a confused face looking the passenger seat and myself to explain to him what he did wrong. He quickly asked in Cantonese:
“What’s the matter with you guys? All I said was I a-per-shit-tated it!”

“Pee” (This is where that little crease between his eye brows starts to form and he starts to      yell…well talk loudly.)

Usually when teaching my parents a new word, they get excited and verse each other in the amount of English words they know but this time my mom seemed to be winning this fight. My dad, unhappy with this loss started saying how he tells people at his job all the time that he “a-per-shit-tates” them and they understand it. What’s so hard with hearing it a little differently?

There was this one time that didn’t happen too long ago or is it that my memory is getting better? It was the day that I realized my dad and mom work so hard for the money they earn and I just use it like it’s nothing.

It was a cold winter morning when I woke up before the sun with my dad. We left the house while it was still pitch black out. We talked about how he always had to wake up so early and go to work every Sunday. I went with him on this Sunday because I was volunteering at the marathon but that’s not important. What was important happened after the marathon when I walked to the Wholes Food: Sushi Department. When I got there, I greeted every one of my co-workers and stood at the entrance watching my dad work and shred through the salmon, seaweed, and rice with his hands and a sushi blade. While he is doing that a customer walks up to the counter and starts asking my dad questions. PANIC MODE.

“Excuse me? What’s the difference in these two rolls?” She says as she gestures to the Dragon roll and the Spider roll.

“Daddy, kueh yew gee gaw long gah roll yow meh yeah yup been ah…[Daddy, she wants to know what it in each roll.] I say quickly and quietly as he walks towards her.

“I know, noi noi.” He said all confidently.

“Oh…okay daddy” That’s when I realized that my parents are in their everyday job and they don’t need me to defend them here.

“The dragon roll inside eel, cucumber. Outside is avocado. On top avocado. And spider roll outside have masago. Inside has soft-shell crab, snow crab, and avocado.” He says with an accent.

Then my dad walks back with a satisfied face and says: “Gnaw sick gnaw jogan meh yeah! A yah noi noi.[I know what I am doing and saying, daughter. Oh gosh daughter.”

Nevertheless, that’s one memory that I will most likely have me questioning the fact that my parents don’t need me as a translator as much as I thought they do as the years pass by. It’s a saddening thought that keeps getting bigger and bigger but I guess I’ll get easier as I write it on paper? I hope so. Just the thought of losing the one thing that I have done to help them so much is heart breaking because they’ve done so much for me and for me to lose that role is like losing a lifetime job.

It’s a relationship I’ve built with arguments, laughs, disappointments, happiness, and father-mother-daughter-little sister moments. Something I don’t want to lose. That is the biggest role and thing I can give back to my family. They raised me to who I am today and I wouldn’t want it any different. I just wish I could go back to the several months and take the disrespect I gave them back. This role in my life gives me the power to show my parents that they raised some one who they can depend on for anything. I want my parents to be proud of me and tell people that I do so much for them as I do for them. I brag about my parents all of the time because they are the best people you could ever ave in your life. The people, memories, and family in my life are irreplaceable. These memories will forever stay in my mind and will keep growing as long as I know who I am. I am the translator, dictionary, and Ellen Vi To of the family. 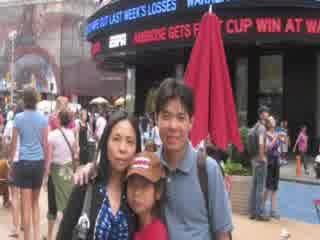