Why, then, ‘tis none to you, for there is
Nothing either good or bad but thinking makes it
So. To me, it is a prison.

Shakespeare is often forgotten or neglected by many people in today’s world. Though Shakespeare is dead, his words are still alive. A lot of people use Shakespeare’s most famous lines without even knowing it. Most people don’t even recognize that the quotes they may be using are Shakespeare’s. Not only does Shakespeare’s words teach people things about life, but they also have a deeper meaning to them.

In one of Shakespeare’s books, Hamlet, he himself is speaking with friends about Denmark and states, “Why, then, ‘tis none to you, for there is”. (II.ii.) While still being upset about his father’s death and having an intuition on who killed him, Hamlet is having a hard time trying to come to terms with the true Denmark. When Hamlet says, “’tis none to you” He means that to his friends, Denmark is the same wonderful place they grew up in. In a way, Hamlet thinks he’s the only one who can see Denmark for what it is since his dad is gone.

Hamlet feels like everyone is in some type of delusional state of mind where they can’t see what he’s seeing. Hamlet’s father death took such a toll on him that he has to go crazy in order to stay sane. He has to keep on living without having to go through all of the pain he’s experiencing being in Denmark with his mother being remarried to his uncle. By doing so, Hamlet can drive himself to the point where he has to be the one to clean up Denmark because it’s not the same place it once was. It’s “dirty” and he feels as though it’s his duty to keep it clean, the way it was without all the unjustified acts.

Hamlet feels as though he’s supposed to take care of all the wrong that’s being done in Denmark because his father is dead. Denmark is Hamlet’s home and he doesn’t want anyone messing it up. It’s almost like policemen needing to clean the streets of criminals because they are messing up the good that once used to live there. “Nothing either good or bad but thinking makes it” (II.ii.). For criminals, they don’t think what they’re doing is wrong, they think it’s right in their mind sets just as much as we think what they are doing is wrong in our mind sets. These two quotes compliment each other so well that it helps people realize that we all have our different reasons on why we think our opinions are right.

In Hamlet, he states the line, “Nothing either good or bad but thinking makes it” because he realizes that arguing with his friends on whether Denmark is good or bad would get him nowhere. For Hamlet, Denmark was hell and for his friends, they thought Denmark was fine as it always has been. Even today people judge things based on if it’s good or bad. It’s what makes people for who they are. In reality, nothing is really bad nor is it good. Being able to tell the two apart is something, as humans the hardest thing to agree on, so it’s good to have opinion even if they’re not the best ones. Humans will never do anything good or bad because as long as they don’t think what they’re doing is good or bad, it won’t ever truly be.

“So. To me, it is a prison.“ (II.ii) The fact that Hamlet has no one to rely on anymore makes Denmark hell for him. Since his friends don’t see what’s wrong and since Hamlet thinks they’re delusional, Denmark is a prison to him. When Hamlet’s father was still alive he felt as though he was open and that Denmark was a place where he could be free. In a way his dad was his own personal sanctuary and with him gone, his sanctuary would be gone too.

This made Hamlet’s world slowly crash. The thought of him always having someone to go to was gone and so was reason. Having someone so close to you for so long just to leave you alone changes a person. Some people can handle the lost, while others can’t seem to shake it. 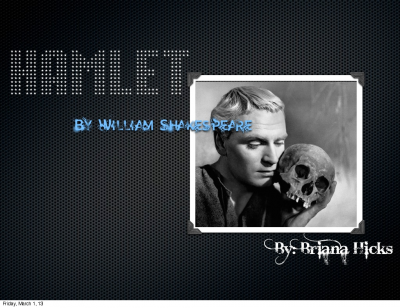