To understand the book Little Brother, one must first understand Cory Doctorow. Doctorow is a member of a group of minds who are of the opinion that all digital media should be shareable. He is against copyrighting, and most of his works are viewable for free online under creative commons licensing. Doctorow believes the creators of the media should have the copyright, and that said media should be free to be used as the creator pleases. These ideas come out strongly in Little Brother.

Little Brother is the story of Marcus, a teenager/gamer/self-made genius. He and his group of friends start out innocent enough, skipping school to play a game. But when a bomb goes off in San Francisco, their homeland, they become captured by Homeland Security. From there, the story becomes a technology driven war of attrition between Marcus’s fellow teens and the government. It is a compelling and terrifying look at what could happen as the United States government goes to extremes to neutralize an internal threat.

This novel is thrilling, full of the choking thought of having your worst enemy be the group you are supposed to trust. There are many points in the early stages of the novel that make you feel the setting well. You are constantly put into situations where it feels like you, not the character, lose people or feel hopelessly lost yourself. The setting, when it isn’t on the internet or main characters’ houses, can give off a very real, close feeling. You also are given enough insight into the characters to start to feel for them, especially during the early parts of the narrative. The most realistic feeling in I felt during this narrative was a growing, infectious paranoia. I truly began to fear the walls themselves, wondering what kind of people my government’s employees really were. Which departments I could trust? Which would readily take me away to control the people around me? The story does a remarkable job turning those we have learned to trust so deeply into the bad guy.

The “trust nobody” feeling of Little Brother is what kept me into it. Cory Doctorow’s writing is at first appealing and witty, but falls short and becomes repetitive uncomfortably quickly. His style feels like an attempt at comedy, and his language is so lighthearted that I almost lose track of the serious tone that the characters situation calls for. The laughs fall too short to actually call this book a comedy. Some people refer to Doctorow’s writing as glorified blogging. The masses are correct. The novel’s focus is lacking. Doctorow fills space that could be used to write a compact, concise story with descriptions of concepts and terms that he uses in the book. This may be an attempt at pushing into the first person point of view as fully as possible, as Marcus is the kind of kid who loves to teach himself as much as he can get his hands on, but it comes off as a drag on the reader. The book is constantly sidetracked by descriptions of random things Marcus knows that range from a paragraph to, several occassions, a full page.

The language posed another issue to me. It felt like Doctorow was trying too hard to play the part of a hot headed young teen. The sound of the book felt unnatural. It felt like someone who was trying to play the character of a teenager, but a forced, stereotypical teenager. For most of the book, I wanted Marcus to stop talking, and for a third person narrator to take over. You could never get behind Marcus on an emotional level. He had four modes: Doctorow fueled blog-like rants on minor things; angry, brooding, authority hating; perverted, unrealistic teenager; and whiny, scared, forced into the spotlight mode. None of these felt like a real human. It is difficult to read a first person novel when you can’t support the protagonist.

Little Brother isn’t a bad book, it just fell short on the expectations that I went into it with. There are plenty of readers who will enjoy it. Anyone who is entertained by the popular young adult novels such as the Hunger Games series and Divergent will be able to find a familiar style of writing and plot structure. Little Brother is also a good entry point for the young to introduce themselves into the cyberpunk and dystopian genres. It is the inflatable kiddie pool of cyberpunk. Any young readers interested in some light, reality grounded science fiction should take some time to read Little Brother.

Self Published via Creative Commons 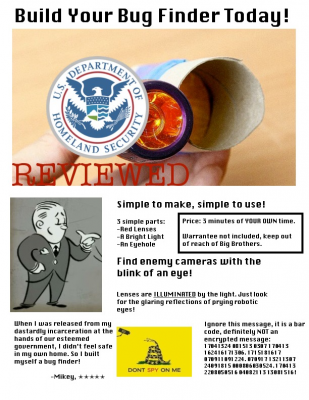 To decode the message, you must take the underlined keyword (Illuminated) and place it in front of the alphabet, repeating no letters in the code: ILUMNATEDBCFGHJKOPQRSVWXYZ
Now, every letter corresponds to a number from 0-25, in the order that they are written. You can use this to decode the message.
*DECODED MESSAGE*
They are in the system. Trust nobody. Not even your family. The walls have ears!
My creative piece is an example of the kind of propaganda that the characters in Little Brother would post. Ideally the explanation for decoding code would be scrawled on the back, to give it the appearance of someone attempting to decode it, and working through it. I have also built a somewhat functioning camera finder based on the instructions above.