Abstract:For my capstone I created a tabletop rpg, named The People RPG. I chose to create this game, because throughout my time at SLA I saw many people who wanted to get into tabletop gaming, mostly though Dungeons and Dragons, but they were put off by the complexity of it.​ TPRPG embodies all of the core elements of tabletop gaming (storytelling, character creation, dice rolling), but cuts out many of the more tedious parts of the process.

The first incarnations of TPRPG was much more complex, as it was mostly a direct clone of Dungeons and Dragons, dumbed down for simplicities sake. This led to the game being patently unfun. After many playtest I found that the players had the most fun when they could tell the story they wanted to tell, with their own interesting and unique characters. This eventually led to rebuilding the system from the ground up, with a focus on being quick, easy to play, and entirely player driven. This version of the game led to a much more comfortable game, where players made it their own from the very beginning.

More than anything this project taught me the importance of having outside testers and peer review. Without frequent testing by people who are willing to give honest, critical feedback, I never would have progressed as far as I did. In a consumer based product such as a tabletop game, there is no real way to know what the people want, other than letting them tell you. 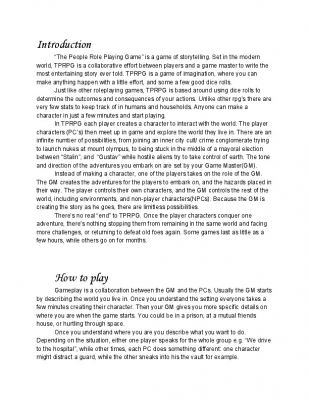 The Dragon Age Tabletop RPG was the original inspiration for my capstone project. It is similar to many other tabletop rpgs, such as dungeons and dragons, but struck me as distinctly different due to its simple combat, low cost investment, and pre written stories. This book is the source of many of the mechanic that I plan to implement in my own game, including the verbal combat system, and the short, simple story arcs.

This source details the necessity of playtesting, and how to have highly effective playtesting sessions. Some of the more important strategies mentioned include, recording your playtest, having natural play sessions, play the game it’s meant to be played, be willing to change mechanics, and make note of issues, but don’t dwell on them.  These tips assure that playtesting makes the game as a whole better, as opposed to being influenced by your own feelings, or those of individual players.

In this talk Erik Mona speaks on the place of tabletop rpgs in the modern era. This source is important because it shows just how reluctant people are to participate in tabletop rpgs in this day and age. Tabletop rpgs have always been a niche topic, but in recent years they have fallen deeper and deeper into obscurity. It will take a truly encapsulating premise to assure that new people join.

Campbell, Joseph. The Hero with a Thousand Faces. Princeton, NJ: Princeton UP, 1972. Print.

The Hero with a Thousand Faces details the common threads behind stories that have spanned the generations. He points out the importance of a hero that you can look up to and stand for, which I believe is doubly true in the case of an rpg. People want to see an epic story that has them as the lead, that saves the day, and when writing scenarios I must remember these points to create an engaging story.

Life WIth a Dice bag is a documentary about the people who play tabletop rpgs, as well as the evolution of tabletop gaming. This source is of great use to me because it talks in detail about the things that keep tabletop rpgers coming back, namely the unique stories, and endless customization options. This is extremely important to my project, which tries to encapsulate both long time tabletop fans, and those who have never experienced the genre.

Tvtropes has a long standing history of being the wiki for quirks and tropes and fiction, but has expanded to be so much more. This crowd written article details many of the oft overlooked steps of creating a tabletop RPG, including all of the things you have to consider regarding demographic, complexity, difficulty, and genre. It points out that you have to make sure you are filling a niche market so as to get people to come to your game in particular.

For many Dungeons and Dragons is the first RPG they will ever experience, and the Pathfinder RPG is the most popular version of D&D. This guide in particular is an expansion on the core rules of the game, and details many experiences that are less common, and not crucial to play. This source taught me that I have to keep in mind that players may do something no explicitly covered in the rules, and give them a way to resolve this within the bounds of the rules.

This web series shows Wil Wheaton, along with other famous nerd icons, playing a wide variety of tabletop games from all different styles, genres, and systems. This series was very important to my research because it shows the difference between different games, and emphasizes the point that tabletop rpg is not a narrow enough topic, and that there are many tough decisions that must be made in regards to the tone and the style of the game, before I get too far into production.