The play, Taming of the Shrew shows how wealth dictates to the romantic experience one has. In the play a man named Baptista has two daughters, Katherine and Bianca who are ready to be married. The men who look to marry these women first have to prove their wealth and riches to Baptista. In the year 2006 Movie, “Madea’s Family Reunion” there are similar ideas from Taming of the Shrew.  In the movie the mother, Victoria, pressures her daughter Lisa into marrying a rich man who constantly abuses her. Though in many ways similar the two stories end differently. The two sisters from the movie, Lisa and Vanessa, gain the power to overcome adversities and explore what true love is to them. While Katherine and Bianca from the play seem to be defeated by the men who took their hand in marriage. Bianca, Katherine, and Lisa are pressured and forced into marriages by their parents, but the more modern text shows how things have changed for women, their marriages can end. This means that women have the right to chose who they love not based on money or parental opinions and true love can be found on its own time.

Many of the characters from the two text are similar. A strong character connection is between Katherine and Vanessa. Katherine was known as an evil and a malicious women while Bianca was seen a sweet and lovely. For example, in the text Katherine is called “Katherine the cursed” while Bianca is called “Minerva”. In the movie Vanessa experiences  similar things. Vanessa’s mom always treated her sister Lisa better than her. Vanessa felt neglected through her childhood because her mother used her just to satisfy the wants of her sick boyfriend at the time. Vanessa’s childhood has left her with many trust issues and scars. She is sometimes seen as an angry person and harsh especially to the man who finds interest in her.

Although these characters are similar they are very different. In the text Katherine seemed to have it out for her sister. She would beat her and call her a host of arrogant names. While Vanessa loved her sister and would encourage her to do what’s best for her.

Is it for him you do envy me so?

Nay, then, you jest, and now I well perceive

You have but jested with me all this while.

In this scene Katherine is attacking her sister Bianca. This anger is coming from a deep place of jealousy. Katherine is envious because most of the men are attracted to Bianca. Katherine knows that if Bianca could get married she would have been married but, she can’t because Katherine is the oldest. Also, Katherine is angry because she feels like things are out of her control. She really has no say so when it comes to her engagement and marriage. Katherine doesn't truly love the man she is marrying and her dad said that love had to be a requirement. (Act 2 Sc 1. Page 83)  “Ay, when the special thing is well obtained, That is, her love, for that is all in all”. Baptista has not been true to that statement throughout the story line. On the day she gets married she expresses to her dad that she doesn't feel like this is the right move. Then, Petruchio comes to the wedding late and is dressed poorly. This is all apart of his plan to tame Katherine and show her that she has no control. His clothes also symbolize their relationship, which is deplorable. Katherine will never be satisfied with her marriage because there is no true love and her choices were made by her father and not herself. 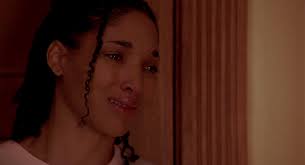 Vanessa-“All men come for something.”

In this scene Vanessa is crying because she feels as though she is no longer able to trust. Unlike Katherine, Vanessa has already been through the taming process. Her mom gave her away to her boyfriend who physically abused and raped her. In this scene Vanessa’s tears may be a sign a sadness but letting her emotions out to someone is apart of the healing process. Vanessa grows into a beautiful person. Later on in the movie Vanessa falls in love and marries Frankie. Unlike the older text, the modern day text shows how one can overcome  issues and find what true love is for himself. Vanessa learns to be comfortable with herself and has come to terms that her mother may never accept the choices she made in her life or apologize for the wrongs she did against her.

“Thy Beauty that doth make me like thee well, Thou must be married to no man but me. For I am born to tame you,...”

In the play Petruchio wants to marry Katherine. He showers her with compliments which at times becomes annoying and overwhelming to her. They get into multiple fights and at the end of the text it seems like Katherine has given up. Petruchio feels a sense of accomplishment because he has tamed Katherine. This is an unhealthy relationship because there is so much mental abuse. All the fighting and arguing can be draining and frustrating. At the end of the play Katherine says a lengthy speech about how wives are supposed to submit to their husbands. Kate doesn't really believe what she’s saying but is simply just telling her husband what he wants to hear. 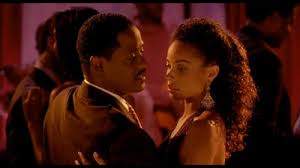 Lisa- “Hit me now so everyone can see what you’re really like”.

In this scene Lisa is dancing with her fiance Carlos. In the movie the character Carlos is similar to the Character Petruhcio from the older text. They both abuse their finances but in different ways. Carlos is more abusive towards Lisa. At multiple points in the movie Carlos is seen abusing Lisa. Lisa is a smart girl and knows she has family that she can depend on but a strong force is keeping her from getting out of this relationship. That force is her mother. Lisa feels obligated to stay with Carlos in order to financially take care of her mother through his income. Also because Victoria, Lisa’s mother protected her as a child and spoiled her unlike her sister Vanessa.  Victoria says in one scene “Stop that whining! Stop it! I took care of you and gave you the best of everything you little princess. Now it is your turn to take care of me!” This shows how parental opinions about marriages aren’t always good. This is not what true love is.

In the end of the Movie, “Madea’s Family Reunion” Vanessa ends up happily married to Frankie and Lisa objects to marrying her abusive fiance Carlos. Although Lisa isn’t getting married or has a man in her life she’s still content with where she is. Lisa learns not to let anyone dictate to who she wants to be in a relationship with with, while Vanessa learns not to let pass experiences dictate to her new relationships with others. On the other hand the two sisters from the Taming of the Shrew, Bianca and Katherine weren't so lucky. They both end up with men who picked them rather than men they picked themselves. These two stories show parental guidance isn’t always needed and how true love will happen on its own time. Even, if true love is found within oneself.