Posted by Matthew Schreiber in Capstone - Echols - Wed on Friday, May 22, 2015 at 7:31 am
Throughout the year I attempted to build a Stirling Engine. My goal was to make one the most cost effective materials possible. i spend hours designing my engine and figuring out all the materials I would need. However this project allowed me to see the issue of time management when it comes to designing a large process as well as how hard it may be to find materials for designs. In the end I couldn’t get all of the materials needed to finish the engine in time. This lead me to eventually design an engine based lesson plan for the new engineering teacher and my capstone mentor, Mr. Kamal, as he is trying to reinvent our engineering classroom. i looked at the SLA sample lesson plan which revolves around the same core values our capstones go by. Looking at this allowed me to design the set up for my engine lesson plan. This included how the schedule should be for the unit, what the teacher should be looking for, and the major essential questions. This lesson plan taught me the importance of trying to make a lesson that engages students and makes every single person involved with the project. Below is the lesson plan I created as well as a drawing of my engine and a photo of all the material I collected. 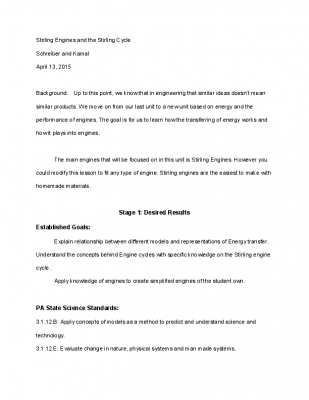 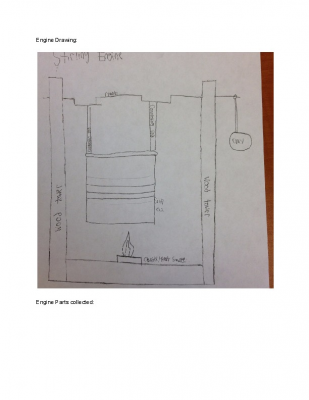 This was both a look at other designs and a look at some of the Science Behind Stirling Engines. The main thing I got from this website is that Stirling Engines can be made by a lot of Cheap materials. One of the designs I looked at was a Stirling Engine made from something as simple as a coffee cup which allows me to be very broad with the materials used in my design. The website also has a very in Depth FAQ’s section that allowed me to see answers to most of the questions I have.

This link helped me when it came to describing my Stirling Engine. It gave me the advantages of a Stirling engine such as how adaptable it is and how efficient it is compared to most combustion engines. There are a few disadvantages of Stirling Engines that this website points out. Such as how the Engine is not that well unknown and is therefore deemed not popular. Another issue is that switching everyone to Stirling Engines is not yet as cost effective as it should be. One big thing it pointed out was the issue with keeping the Engine sealed, which helped with my design.

This was one of the first websites I came across when finding a way to Build a Stirling Engine. I needed to see what a smaller design looked like so I could make one myself. This source gave me a lot of info and an in depth instructions on how to build the Stirling Engine that is shown. One thing that the website didn’t give me was all of the science behind each part. It only gave me the materials needed to build it and the measurements for it. I could see that each part worked, but the website wouldn’t explain why.

This book wasn’t exactly for my engine itself. I am using this book as a source because it was a large influence on my engineering process. It gave 101 different tibets about Engineering in general and gave me a lot of tips, when it came to work speed and process. One tip that has already began to help is the fact that working fast does not save money. Meaning that I should take a little more time than what may be needed so that I can save money by not making mistakes. Other tips was the fact that solar energy is super useful in projects and that environmental positive impact projects (like mine) are really good.

This was another source that I used when trying to work on my design that was shown to me by Mr. Kamal. This one gave way more in depth designs on different Stirling Engine. This website was special because instead of giving designs made by professionals who work on these daily, it gave designs made by people who just have a similar interest in Stirling Engines. A similar drawback with this website is that it does not give me the science that I am looking for. The website is also a little harder to navigate to the different designs.

This is one of the most useful sources that I have. It gave me the Physics behind Stirling Engines and Guidelines behind an idea of their own for Stirling Engines. I prefer this source over most because it gives diagrams to explain how the major parts of the design work. The one thing I would of like this website to do was give information about the Physics around Stirling engines in General and not just about their design. This way I could have a easier grasp about all of the information they were given men so I could apply it to my own design.

I got another look into the Science and History behind Stirling Engines. However one unique thing that this source gave me was the idea of a Low Temperature Differential Powered Stirling Engine. This is a form of a Stirling Engine that still gets an efficient amount of Energy from the Engine, but without it needing to get to the high temperatures that Stirling Engines normally need to get too. This would be a version that would be a lot more cost efficient because you wouldn’t need to focus so much on increasing and store heat into the Engine. This source gave me a good idea on another kind of engine that I can build.

I have been working on this project for over three years. I tried multiple times to build it, but couldn’t finish because I ran out of time. Over the last three years Mr. Vk has given me a lot of information about Stirling Engines. So I just decided to combine all of the conversations into one source. Some information includes how they work with heating and cooling as well as the environmental Benefit of the Engine. He taught me about how most of the engines needs to have an insulated Piston in order for the Engine to work. It because of my many trial and error attempts in VK’s class that made me decide on this Capstone.